You are here: Home / Culture / Art + Design / Painting in Shades of Espresso and Ales

When Karen Eland is not sipping her espresso, she’s dipping her paintbrush in it. 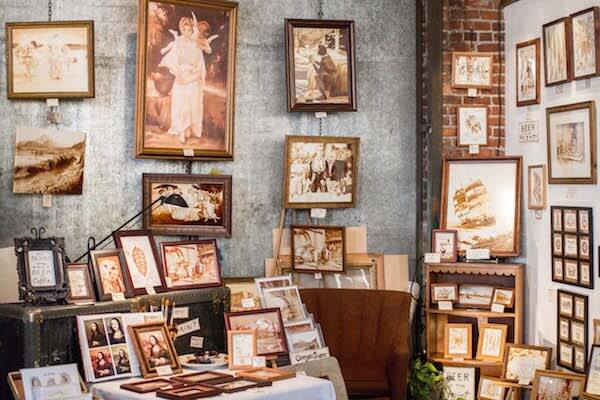 This fascination began in 1998, when she sat inside a coffee shop in her hometown of Tulsa, Oklahoma, painting portraits of people with watercolors. For the first time, she gazed into her tiny cup of espresso, admiring its color and wondered what it would look like on paper. “Why don’t you just try it?” her friend, the barista urged. Eland’s career as a “coffee painter”began. 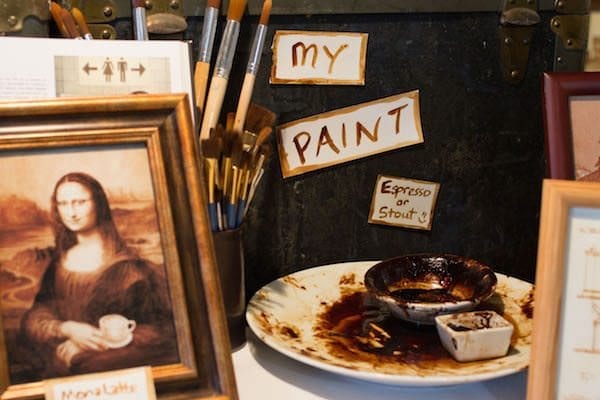 Today, the 42-year-old artist lives in Bend and spends her days in her small studio inside The Workhouse, a community of art studios in the historic Bend Iron Works building. In Eland’s nook of the Workhouse, her numerous coffee and beer paintings are displayed for sale—a framed “Birth of Venus,” eight-by-ten-inch prints of vintage bicycles and botanical greeting cards. In the middle of it all, she works at her desk that’s sprawled with watercolor paper, brushes and bowls of drying espresso.

Eland draws inspiration from the renowned masters of painting. Many of her works are renditions of classics, painted with espresso and a coffee cup inserted into the scene. For example, one of her first coffee paintings was the Mona Lisa holding a cup of espresso, fancifully swirled with latte art. 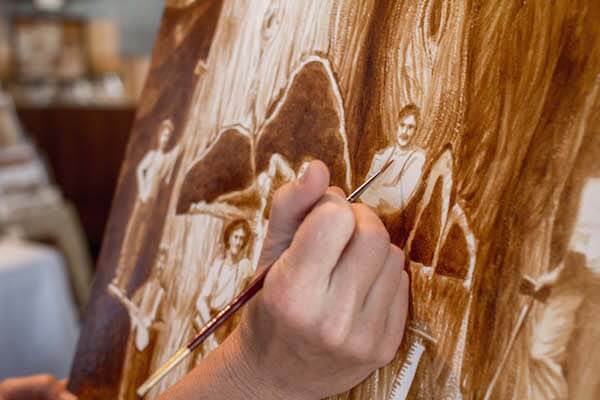 Even though Eland is limited to shades of brown, she is able to capture minute levels of detail. “You would think that beautiful, colorful paintings like “Starry Night” or the “Café Terrance” wouldn’t translate well without color, but they look cool in just brown,” Eland said. “I’m surprised after all these years that I’m not sick of brown, but somehow it’s just soothing.” 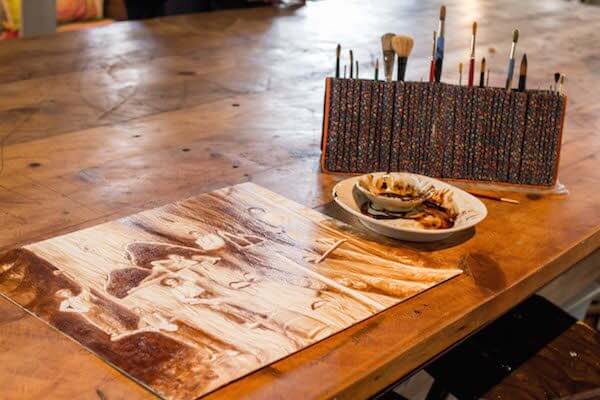 After moving to Bend in 2008, Eland’s natural progression found her painting with craft beer. “I’ve experimented with a lot of different beers, but I almost exclusively have to use porters and stouts,” she said of the thicker, darker libations. With porters and stouts, she moved into live painting at Bend’s Brewfest and events held by Deschutes Brewery. Eland was even commissioned last year by Worthy Brewing to create four large beer paintings to hang in its restaurant. Each of her paintings for Worthy depicts one of the four elements of beer —water, hops, yeast and barley— painted in Worthy’s own Lights Out Stout.

The next challenge for Eland is red wine. While in Paris in 2012, she perched her easel in front of the Eiffel Tower to paint it using only le vin. The video on her blog shows curious tourists gathered around to watch as she successfully paints with the magenta-toned liquor. She’s hoping to further experiment with wine as well as with chocolate.

“In the winter, I’d like to do a hot chocolate and chocolate painting class,” Eland said. “That’d be cozy.” 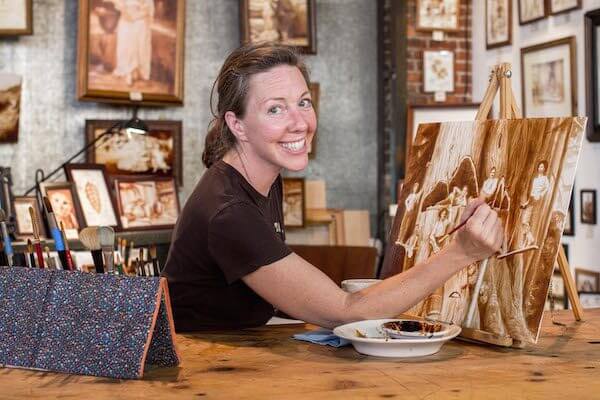 Try coffee or beer painting at one of Eland’s Sip & Dip classes at The Workhouse, offered twice monthly. Sign up here.