You are here: Home / Business / Paul Evers Knows Your Drink—And Your Next One, Too

Paul Evers, the man behind Crux and tbd, wants to change the way you think about coffee. His backers are betting big that he will succeed. 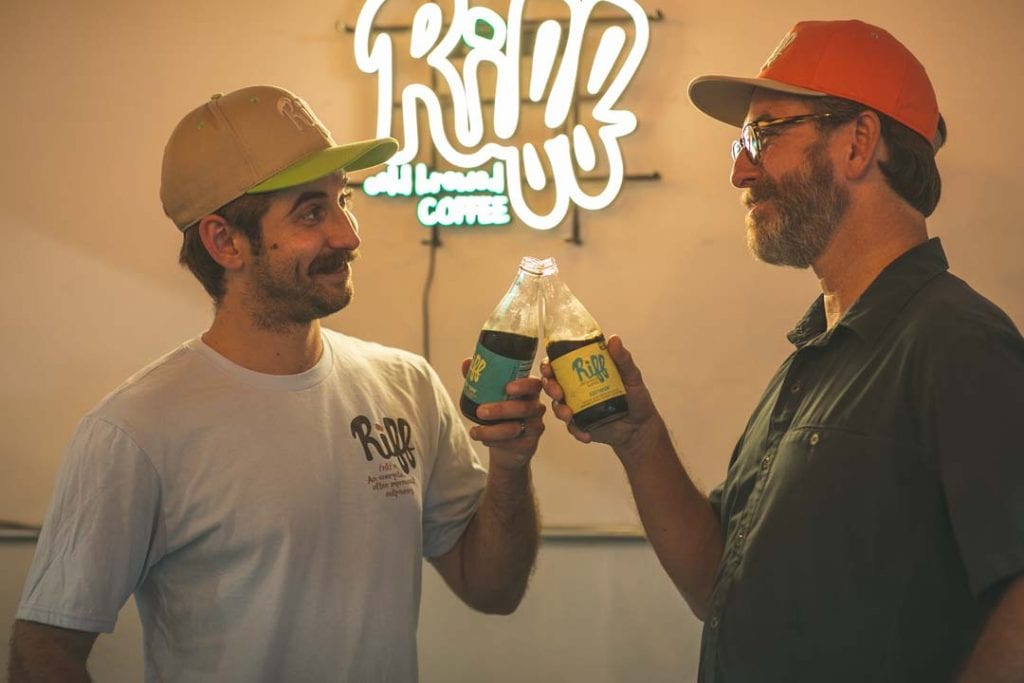 Every Tuesday morning at 7 a.m., Paul Evers meets with his son Bobby at a local coffee shop for a hot Americano or latte (the temperature is important here).

The two talk for an hour or so about life, family, adventures, challenges—just about anything. “Except for cold-brewed coffee,” the elder said with a chuckle. No, for one hour a week, Riff Cold Brewed Coffee talk is off limits.

That’s because most every other hour of every day is devoted to Riff, the upstart cold-brewed coffee business that the two—along with three other co-founders—launched last year after Evers left his previous job as a managing partner in the wildly successful Crux Fermentation Project, a move that surprised many who watched Evers build the business from the ground up.

For those who know him best, however, it wasn’t a shock to see him walk away from Crux. They knew that experimentation was nothing new for Evers, a marketing and branding guru for whom change has been the one constant over the course of his career.

Where is Bend, Oregon?

A fifth-generation Southern Californian, Evers’ grew up the youngest of nine brothers and sisters. He relished the annual spring break father-son trips his dad would take him on into the mountains. “I was always more of a mountain guy,” said Evers, 57, whose salt and pepper beard, plaid shirt and trail running shoes fit the bill.

He started his career in Orange County as an art director in the tech world working on projects for Microsoft and Aldus, but was eager to get his wife and two small children out of the concrete jungle. So he began looking for art director jobs anywhere in Oregon and Washington and eventually got a call from an ad agency in Bend.

After the third phone interview with Mandala Communications, they offered him the job in May of 1990. “But I told them I didn’t know what or where Bend, Oregon was so I was able to talk them into flying me out,” he said. “I immediately fell in love with it.”

Over the next few years Evers was courted by tech giant Intel and several agencies in Boise, but he wasn’t ready to leave Bend. When he did move, it was from the offices of Mandala to the back of his own home where he started a craft brand agency called “tbd.”

For Evers, the goal wasn’t just another agency. The idea was to build a business with a full-service approach to its clients—an agency that went beyond package designs and ad campaigns. Evers wanted an agency that could help clients build ideas that resonated with customers.

“Paul was truly the leader of this movement to start an agency that was a little different,” said René Mitchell, who moved from Mandala to tbd with Evers. “Agencies are criticized for only caring about the creative work,” said Mitchell. “[Paul] had a vision about how to create strong creative work and help a partner’s bottom line.”

Said Bobby: “He did a great job of not just taking what the client thinks they need but helping them develop what they actually need. That was a huge differentiator as to why tbd was so successful. They weren’t just executing branding, they helped solve problems.”

For eighteen years tbd had a hand in the growth and identity of some of Bend’s most iconic brands. Evers and his team came up with Woody, Deschutes Brewery’s gigantic rolling keg/tap room, and paved the way for the brewery’s groundbreaking experiential marketing efforts that continue to this day, like a traveling street pub. And Evers was the guy who in 2012 helped rebrand Kombucha Mama, a fledgling kombucha company, into Humm Kombucha (for whom Mitchell now serves as Director of Marketing).

Working on branding with Deschutes Brewery and San Francisco’s 21st Amendment Brewery was enough to spark Evers’ interest in starting his own brewing business—if the right people were involved.

As it turned out, the right people were interested.

The result was Crux Fermentation Project. The business brought together the branding power of Evers and tbd, the industry insights of 21st Amendment’s Dave Wilson and the craft brewing mastery of Larry Sidor, a brewing legend whom Evers and Wilson wooed away from Deschutes Brewery.

“We wanted to deliver an experience beyond what beer could be,” Evers said. One look at the families sprawled across the lawn outside Crux during the summer and it’s safe to say that mission was more than accomplished.

Bend Assistant City Manager Jon Skidmore was the Bend Business Advocate at the time, helping small businesses wade through the complex permitting process. To Skidmore, Evers will always be the guy who saw potential in an old auto repair shop, the former Aamco transmission building that Evers and team chose as their unlikely home for the fledgling brewery.

“I had a really hard time envisioning what they were shooting to get to,” Skidmore said. “That’s a fantastic example of Paul’s creativity—someone who can walk into a transmission shop and envision a world-class brewing facility. I sure didn’t see it.”

Over the next few years, Crux’s growth outpaced what anyone had imagined. In 2013, Crux produced just over 1,700 barrels of beer, making it the thirty-fifth largest brewery in Oregon. Last year, production jumped to nearly 10,000 barrels, ranking it seventeenth. Earlier this year, work began on a 2,800-square-foot expansion to the roughly 6,000 square-foot pub in the heart of Bend. 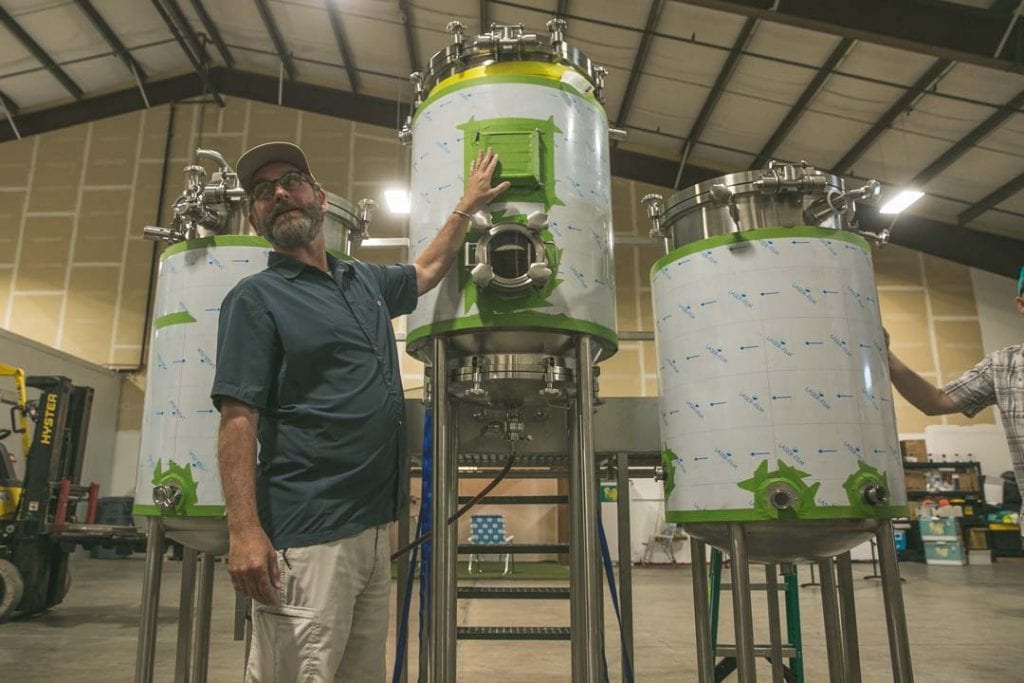 Paul Evers next to Riffs pilot brewing system, a centerpiece of the new tasting room.

Four years after opening in 2012, and just as the Crux brand had established itself as a leader in the Northwest craft beer scene, Evers decided to move on while maintaining his stake in the business and seat on the board.

“The brand was in a really great place and had such positive momentum that it was a good idea to hand the brand off to someone with a new perspective,” he said. It was a perfect time for Evers to return to doing what he loves most. “What I’ve learned about myself, what really gets me excited, is building brands,” he said.

For his next collaboration, Evers didn’t have to search long or far. He found a willing partner in his son Bobby to embark on the next adventure. By late 2017, the enterprise had a name and a strategy, Riff Cold Brewed Coffee, a bold experiment that combines Evers brand development with the retail and customer service model that helped establish Crux as a go-to pub.

Riff, to many though, is an unknown. Currently under construction in the burgeoning Box Factory—just down the road from Crux incidentally—the Riff taphouse is already an eagerly anticipated new addition to the Bend craft beverage scene. While cold brew coffee is nothing new or novel—it’s been one of the hottest beverage trends over the past two years—Evers’s venture is likely to push the boundaries of the formula with ideas like flavored and sweetened varieties and even wild-yeast fermented versions.

But unlike Crux, there is no blueprint for a cold brewed coffee taphouse. Together with Bobby, Nate Ambrust, a former executive for Stumptown Coffee Roasters (and widely considered a pioneer in the cold brewed coffee space), Steve Barham, a former top executive at LinkedIn, and Kevin Smyth, who worked with Evers for fourteen years at tbd and in planning Crux, the Riff team has borrowed a little from the craft brew model, a little from the coffee shop playbook and improvised the rest.

These days, Evers is looking at coffee the same way he looked at that old transmission shop. He sees the potential so he’s immersing himself in learning about beans, the cold-brewing process and the industry itself. The education is necessary to feel confident while embarking on a new mission. Bobby said he believes his dad wants Riff to truly reflect its founders’ values. He said craft beverages, be it coffee or beer, resonate with customers because the products are an extension of the team behind the drink.

“We’re having fun and exploring,” Bobby said. “We’re not saying we have it figured out. We’re constantly learning and hopefully that shows in the brand itself.”

Riff’s four current flavors of bottled coffee are already available at stores throughout the region. Evers has been busy with his team pushing the brand through social media, word of mouth and offering samples to anyone and everyone who can be evangelists for the product.

The taproom will open sometime in September, a perfect time of year, he said, to introduce Bend to a new craft beverage.

“We want to provide an extraordinary experience for folks that reintroduces coffee to them in a way they don’t expect,” Evers said.

Share This Article
« Weekend Roundup: Sept. 5-9
All the World’s a Stage for Local Violin Prodigy »