You are here: Home / Culture / Raising rabbits for 4-h competition keeps these teens hopping all year

On a hot summer afternoon just weeks before the Deschutes County Fair, Carey Silbaugh’s front yard in Bend was hopping—literally—with a dozen rabbits of various colors and sizes, along with the young women who raised them. It’s the June meeting of the Bunny Brigade, a 4-H club devoted to raising rabbits. 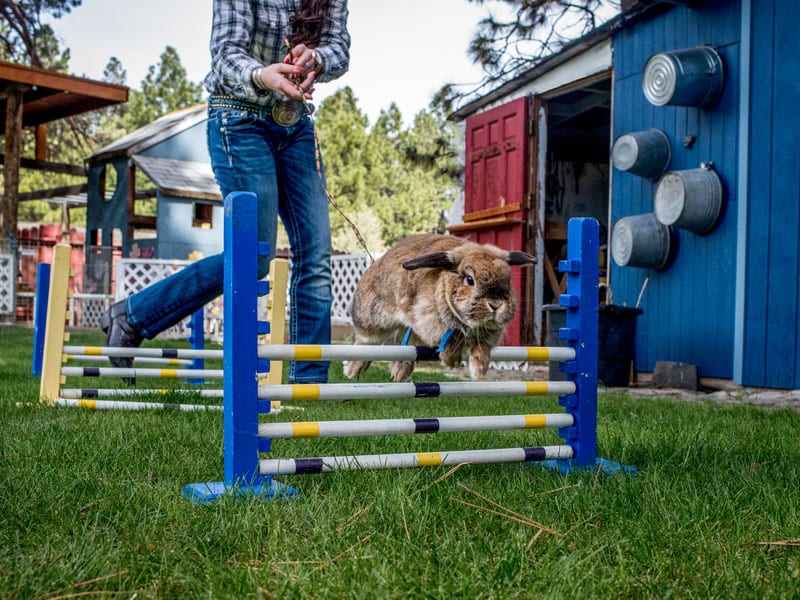 Like many teenage girls, they giggle and tease each other as they chat. But their conversation is far from typical. The discussion ranges from the differences between breeds like a Holland Lop and a Netherland Dwarf, to signs that a rabbit is sick. One of the older teens examines the eyes and ears of a friend’s rabbit, who seems sluggish. “Add a little Gatorade to his water,” she advises, “and feed him some pinecones.” In a world where many teens focus on social media and digital lives, animal husbandry is an unusual interest. But for the young women of the Bunny Brigade, raising rabbits is serious business.

The Bunny Brigade is one of several 4-H clubs working with rabbits in Central Oregon. The group has about a dozen members, aged 13 to 19. At monthly meetings with their team leader Silbaugh, they dive deep into rabbit care, anatomy, breeding and health. They also learn the business side of raising animals, and prepare to show their best rabbits in competitions. Along the way, they gain confidence, resilience and problem-solving skills, and create a community of mentors and friends grounded in a real, unplugged world.

Over 870 kids and teens are involved in 4-H groups across Deschutes County, according to Candi Bothum, 4-H Educator. “It’s not just about animals—we have clubs for every interest imaginable,” Bothum said. Whether it’s hiking, photography or animals, the clubs share a few core elements: developing knowledge in one key area, keeping a record book of goals and achievements, and participating in competitions like the county fair. All 4-H activities are open to girls and boys ages 9 to 19; younger kids can join the Clover Buds groups, which don’t include competitive events.

Most kids stay involved in their group for several years, explained Bothum, and 4-H becomes a strong influence in their lives. “College professors tell me they can recognize the 4-H kids in the class by their sense of responsibility and their time management,” she said. 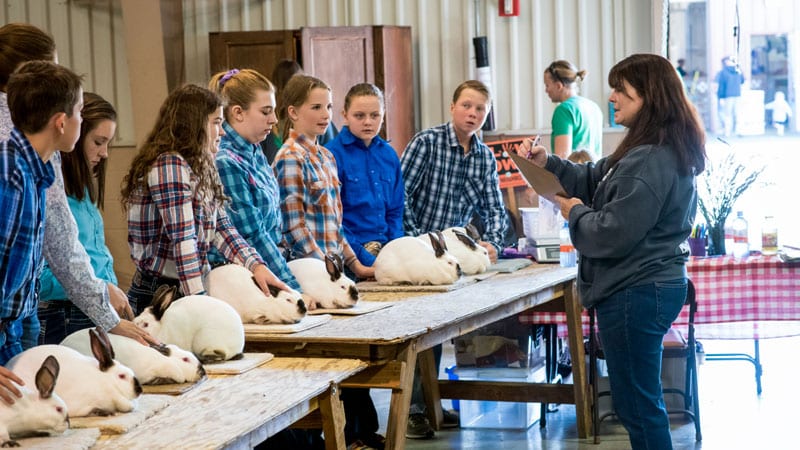 The clubs are part of the Oregon State University Extension Service. Land-grant universities like OSU share the mission of providing community education throughout their states, with gardening and nutrition classes for adults and a wide range of 4-H activities for youth. Since its inception over 100 years ago, 4-H has grown into the largest youth development program outside of public schools.

For kids interested in animals, rabbits have an advantage over larger animals. Sheep, goats and cows require a barn and pasture, but bunnies don’t need a lot of space. As Silbough explained, rabbits offer a way for any kid to participate. “You don’t have to live on a ranch to do this. One of our kids keeps her rabbit in her bedroom,” she said. 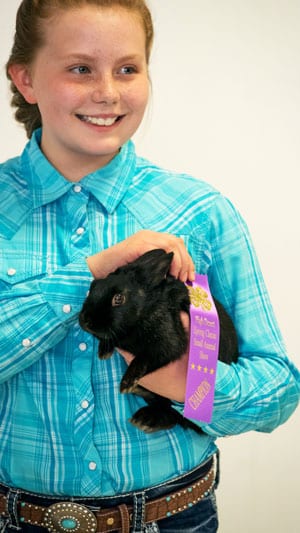 Destiny Beamer joined 4-H at age 7. Now 19, she’s moved on from 4-H but continues to breed and show her rabbits at a professional level, in additional to studying at Cascade Culinary Institute. Last summer, she participated in her twelfth and final county fair, and reminisced about the influence the 4-H rabbit groups had in her life.

“There were a few years in high school that were pretty difficult. My mom had a car crash, I got really sick and I had to change schools a lot. The one stable constant in my life was working with the rabbits and other 4-H projects,” Beamer said. “The friends I’ve met in this community are like an extended family to me,” she added, “and they inspired me to help teach the kids just starting out.”

Because of an undiagnosed learning disability, Beamer had trouble reading during elementary school. Her desire to gain expertise drove her to keep working through rabbit books, and she taught herself to read years before she learned she is dyslexic. “I learned to speak clearly too, by watching the older kids when they presented to the judges. I did what they did—calm down, slow down and speak up,” she said. Most of all, she explained, she learned to problem-solve when answers weren’t obvious, and figure out how to make things work—a skill that applies to all parts of her life.

Bunny business through the seasons 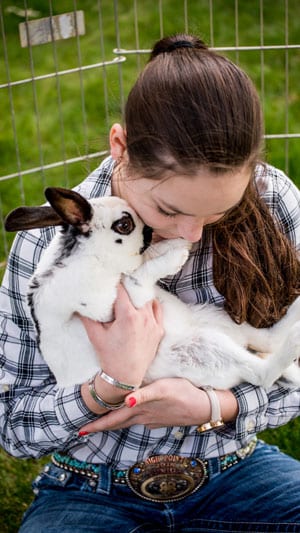 The winter months allow time for the Bunny Brigade to take stock of their successes at the previous August’s fair and start planning for the next year. Each member updates their record books, where they list community service events, budget expenses and income from their rabbits, and lay out their goals for the next season. The record books document years of work and achievement, and track the cashflow for each project to the penny.

By spring, team members evaluate their rabbits with an eye toward the county fair competition. They must decide which to show, which to breed and which to take to market. Selling rabbits at the county fair auction is an important source of income—the rabbits often sell for $130 per pound. Natali Gerdes, 17, clarifies that raising rabbits is not the same as having cuddly pets. “You look at it differently when you breed them as market rabbits. We look for specific qualities, and choose the rabbits to breed for that purpose,” she said. At the 2019 Deschutes County Fair, Gerdes received scholarship funds to grow her business with more rabbits, and was recognized with the Small Animal Sportsmanship Award for helping newer club members.

By early summer, the Bunny Brigade meetings focus on preparing for the county fair, where the girls will show their rabbits in hopes of a ribbon or a sale. They line up behind a table, settling their rabbits on carpet squares as Silbaugh plays the role of judge, quizzing them on rabbit anatomy and health. They demonstrate how to check the hocks (the heel of the paw pad, which can easily become infected), check for mites (blow gently on the fur to expose the skin) and check for malocclusion (pull back the lips to verify the teeth line up).

Once the fair begins, Silbaugh has high expectations for the Bunny Brigade. But she’s watching for teamwork and effort, not wins or losses. The Bunny Brigade policy is to be the last to leave the barn each day, staying to help and clean until all teams have finished. “I don’t care what color ribbon any of us take home. The fair is a chance for our whole team to shine,” Silbaugh said. 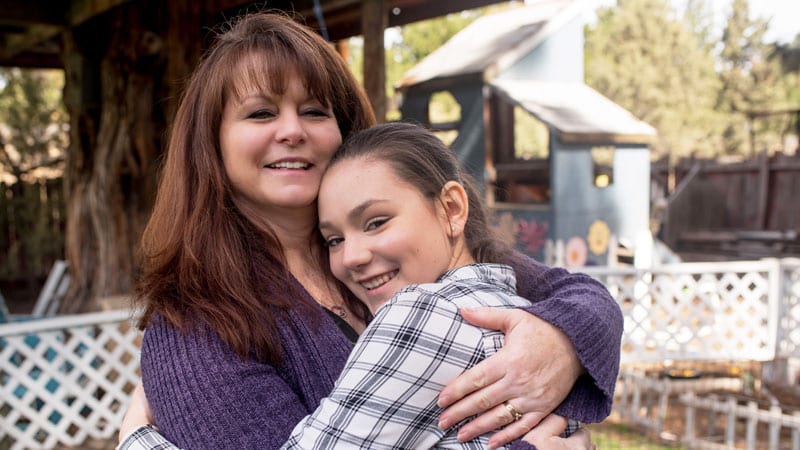 Her granddaughter, Cheyenne Silbaugh, echoes that viewpoint. As a Bunny Brigade member for several years, she’s won dozens of ribbons, yet is more eager to show her record book as a way to share her successes. As she explained, “The fair is a competition, and getting a ribbon is a reward for your work, but really we are more like a big family. We have fun with the competition, but we all help each other—that’s what it’s all about.”