When blue skies turn hazy with smoke and the forest floor starts to crackle, Redmond’s fire jumpers are often already in the sky parachuting into the problem.

For Chris Hinnenkamp, squad leader at the Redmond Air Center (RAC), containing fires isn’t the most dangerous part of his job. It’s getting to the blazes that presents the greater risk. “Fighting fire is the easy part,” he said. “You can get stuck in a hundred-foot tree. You could break your leg on the jump. We just travel to the fire a different way than any other firefighter.” 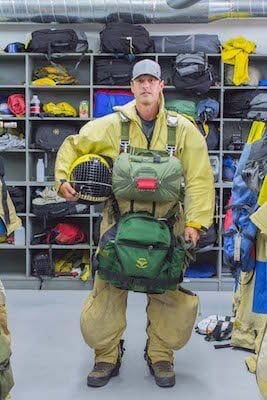 Hinnenkamp, 35, an eight-year veteran with the Redmond Smokejumpers, is one of about 400 men and women across the United States who leaps into veils of smoke for a living, tackling the hardest-to-reach fires before they combust into headline news. “We catch a lot of fires that nobody has any clue even happened,” said Hinnenkamp. “That’s pretty much our bread and butter, those fires in the middle of nowhere that are almost impossible to get to by foot.”

Every morning at the base begins with a frenzied rush to fill the jump list’s top slot. At RAC, the first one through the door is the first one out of the plane and in charge of the fire. The rule is meant to instill leadership within the team, naturally though, it sparks friendly competition. Ten members load up for each dispatch, but not everyone gets to jump each blaze. In the back of their minds is the “Jump Hog” trophy. The member with the most jumps each season gets his or her name carved into the venerable wooden pig-shaped award.

With dry lightning in the forecast on this August day, Hinnenkamp suspects he is in for a busy week. Still, his plans are up in the air not knowing when or where he’ll be soaring next. “I hear the bell and I’m wondering where we’re going. It’s always a surprise,” he said. “Then it’s a race to get that suit on and get in the plane.” 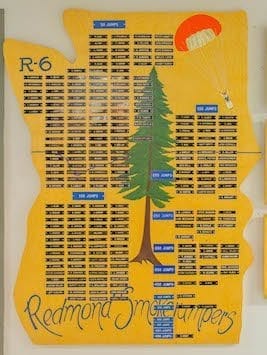 Less than six minutes after an alert bell is sounded, Hinnenkamp and his crew are fully-suited and in the air. “We get there ten times faster than anybody else,” he noted, “We could fly somewhere 200 miles away and be on that fire in a half hour.”

Because so much of being a smokejumper revolves around the unpredictable, but impending clanging of the bell, Hinnenkamp embraces fluidity and flexibility. “You never know where you’re going to be at any time,” he said. “We could be in Nevada, going down to California, or we could hop on a plane and be at the Canada border.”

Stepping out of an airplane 1,500 feet above the ground with eighty pounds of gear strapped to him, Hinnenkamp is unfazed. After all, the North Dakota native came to the Pacific Northwest seeking adventure. He said that he always feels at peace just before he dives into harm’s way. “When you’re in the door getting ready … you’re focused,” he said. “This is your time.”

One firm smack on the leg signals it’s time to jump. Hinnenkamp takes a deep breath then falls through the doorway with no hesitation. “It’s like a vacuum sucking you up,” he said. “The second you go out the door, it’s this big whoosh and then it gets quiet. There you are with your parachute. It’s so quiet that you can’t hear a thing.”

When jumping into a fire, these elite members of the United States Forest Service can be gone for two days to two weeks, depending on the size, severity and location of the fire. Once they’ve mopped up the blaze, they’ll cram about 130 pounds of equipment into a bulging pack-out bag and carry it on their backs, usually for many miles, to the nearest road for extraction. 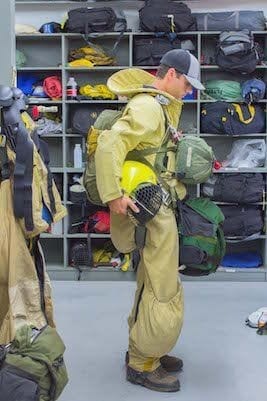 In their downtime, smokejumpers stitch together every piece of their custom-made suits and patch holes in their chutes, “We make everything,” said Hinnnenkamp. “That’s part of the job that probably nobody thinks we do. We probably spend more time on those sewing machines than anything else if we’re not fighting a fire.”

The rest of the year, Redmond’s jumpers migrate south to assist with prescribed burns and lend their expertise in states such as Alabama, Louisiana, and Florida.

Smokejumping may be one of the riskiest professions in the country, but it’s also one of the most competitive. This year, nearly 500 men and women applied to join the Redmond Smokejumpers. Ten were selected.

Hinnenkamp has about sixty fire jumps under his belt, but has many to go before seeing his name near the top of the base’s all-time jump list. After six years on a hot shot and structure crew, he couldn’t see himself arriving to fires any other way. “When you see the old guys out here who have been jumping for twenty-five years, I think that’s amazing,” he said. “Hopefully I can stay healthy, so I can keep doing this. I could never do a desk job. That’s not me.”

Share This Article
« Fighting the Fit Way
Firefighting of the Future »