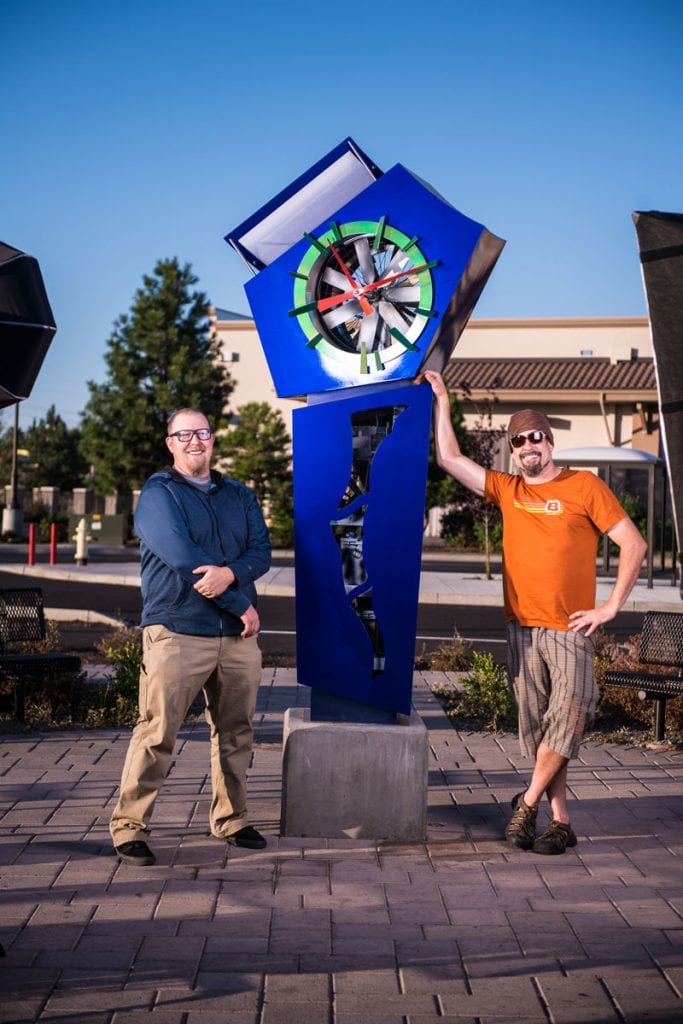 In the transit center area behind the Redmond Lowe’s home improvement store awaits something unexpected, a four-dimensional sculpture that observes you back. The bus station’s outdoor waiting area now includes a large, colorful, and metallic clock tower sculpture that was created by a team of five artists who combined unique styles and mediums to create a testament to time, relativity, and obscurity.

Headed by artists Miguel Edwards and Jesse Pemberton, this sculpture called “Relativity Clock” is now on display in Redmond, along with eighteen other works of publicly funded art installations as part of the city’s Art Around the Clock initiative. After two years on display, Redmond residents will have a chance to vote on their favorite installment.

With contributions from additional artists Rick Zar, James Meyer, and Ginger Sanders, the “Relativity Clock” is an artistically diverse piece, combining glass blowing, neon, motion sensitive LED lights, welding, carved sheet metal (of which no single piece has even one right angle) and more. Playing on the theme of relativity, the installation’s motion sensitive lights mean that you can change the way the sculpture is experienced by everyone around you.

“You can become part of the sculpture by coming near it. Not only are you observing the art, but the art is observing you,” Pemberton said. “The observer changes the observed object.”

The designs etched into the sides of the roughly ten-foot-tall sculpture carry meanings and motifs from the local landscape, and all relate to one another in shape or symbolism. For instance, one side is carved to look like an aerial view of a river, with the bends in the shape that carry the observer’s eye like a river current. At the same time, it exposes the inner workings of the sculpture, revealing the intricacies of hand-blown neon lights, car batteries hooked up to a solar panel, and a good deal of welding that include metal clock hands that allude to, but do not actually tell time.

The clock is metaphysical, but also mechanical, drawing on sun and wind power. Edwards and Pemberton requested it be put in the windiest part of the city because the top of the clock tower features a round wheel that acts like a pinwheel in the wind.

“Turns out, the windiest available spot in Redmond happened to be a bus stop,” Pemberton said. “This creates an ironic moment, as you sit waiting for your bus to arrive and stare at a clock that does not work.”

This sculpture will be on display for the next two years, at which point the residents of Redmond will vote on their favorite installation from among the nineteen works, with the most popular piece being granted a permanent spot to be displayed in the city.