You are here: Home / Culture / Saving Norris, A Horse That Suffered A Twist of Fate

A thoroughbred racehorse destined for the racetrack suffers a twist of fate, but lands in Central Oregon, where a passionate equine community rallies to give him a second chance. 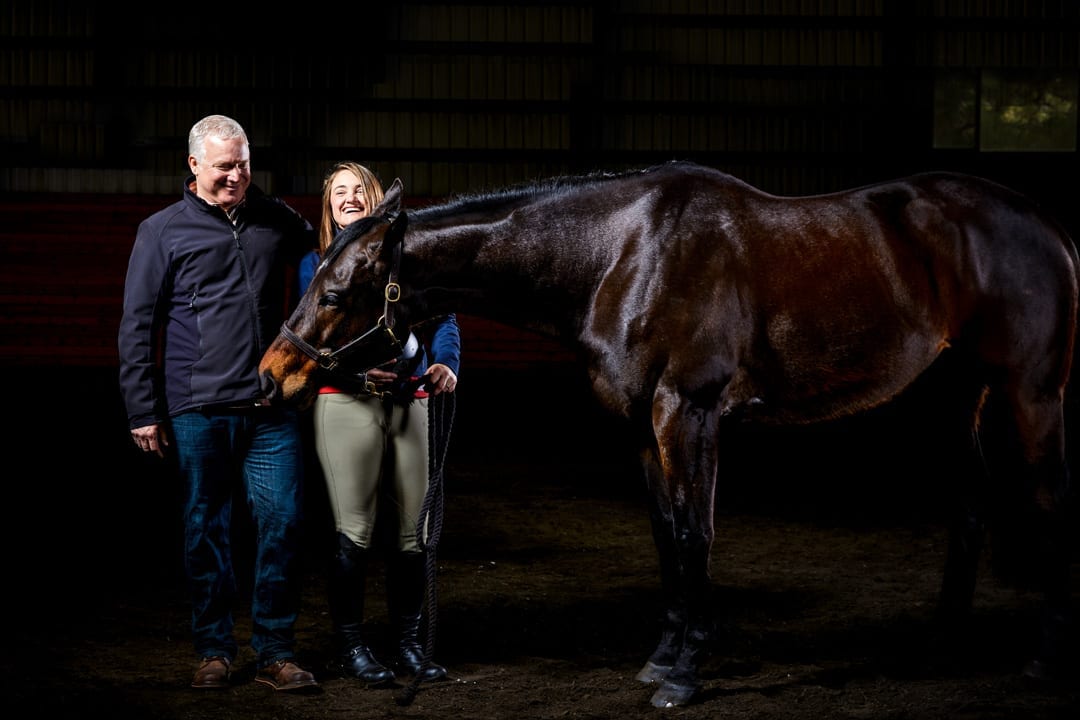 In the winter of 2012, a colt named American Pharoah was born in New Jersey. The thoroughbred spent his early life in some of the best barns in America, training to become an elite race horse. In 2015, he became the first horse to win the Triple Crown and the Breeders’ Cup Classic, considered the Grand Slam in horse racing. Acclaimed for his speed, good nature and athleticism, American Pharoah became a legend, revered by the horse community and popular with the media and public.

Around the same time American Pharoah was born, his half-brother was born in another barn. They called that colt Party on the Nile. He had the same smooth stride and impressive physique as his brother as well as the same kind demeanor and hardworking personality. His career, however, ended differently. Plagued by a damaged tendon and hoof problems, all chances of becoming a star racing horse like his half-brother were gone.

“So often you’re looking for one thing, and you find something else,” said Valenta.

Valenta took a leap of faith. Party on the Nile left Pennsylvania in a trailer bound for Oregon. He had cleared his first post-race hurdle, avoiding the slaughterhouse in Canada or Mexico, the fate of many young failed racehorses. Instead he was welcomed by a thriving equine community that was willing to make a different kind of bet on a thoroughbred racehorse. 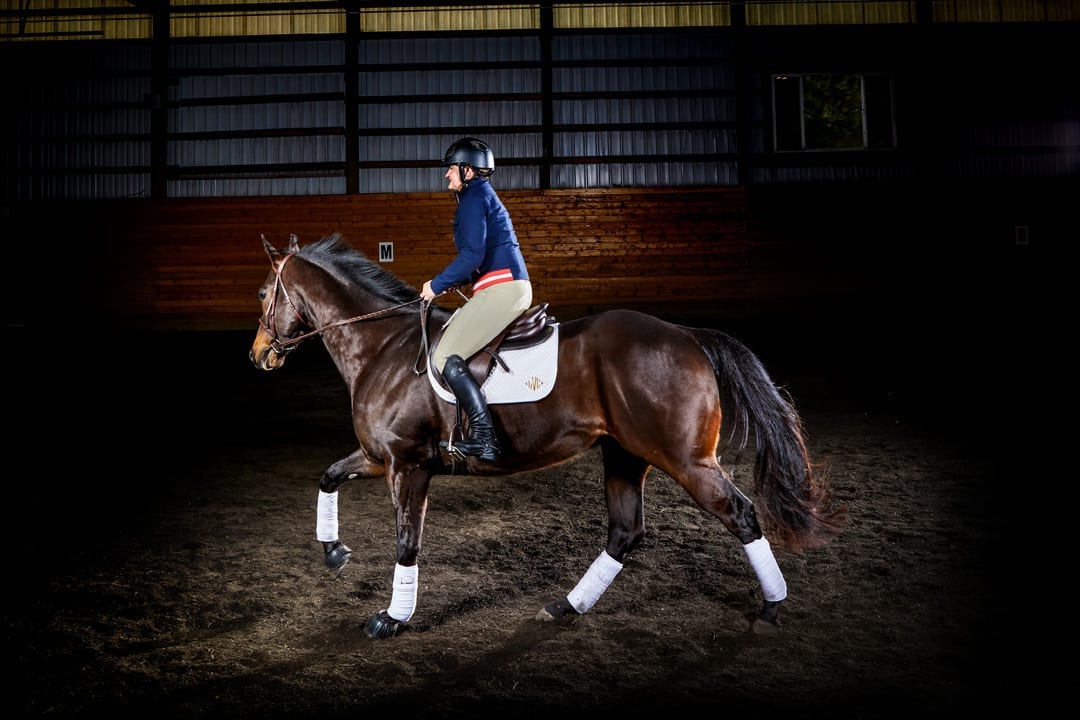 Valenta wasn’t sure what to call him. For months Valenta and her husband, Kevin, called him New Horse. That became Norse, and eventually, Norris. The horse had a new name and a new start, but his health issues lingered. Despite expert care, Norris’s leg wasn’t getting better, it was getting worse.

Lisa and Kevin own four horses and are no strangers to horse problems. As high-performance animals, horses require a whole team of care, from farriers to the veterinary team to chiropractors to masseuses and trainers. “It’s not just you, and it’s not just the horse,” said Valenta.

That means plenty of room for opinions and plenty of opportunity for healthy debate. The equine community is tightly knit, but not always in lock step. In this insular culture everything from saddle fit to bits to feed is dissected and analyzed. About the only thing that the horse community can agree on is the duty to a sick animal.

“Norris wasn’t available for adoption to anyone except [someone] who had the resources, the community, to deal with these issues,” said Valenta. “Not all communities are are as lucky as Bend to have as many professionals, farriers and vets that specialize in these types of issues.”

It Takes A Village 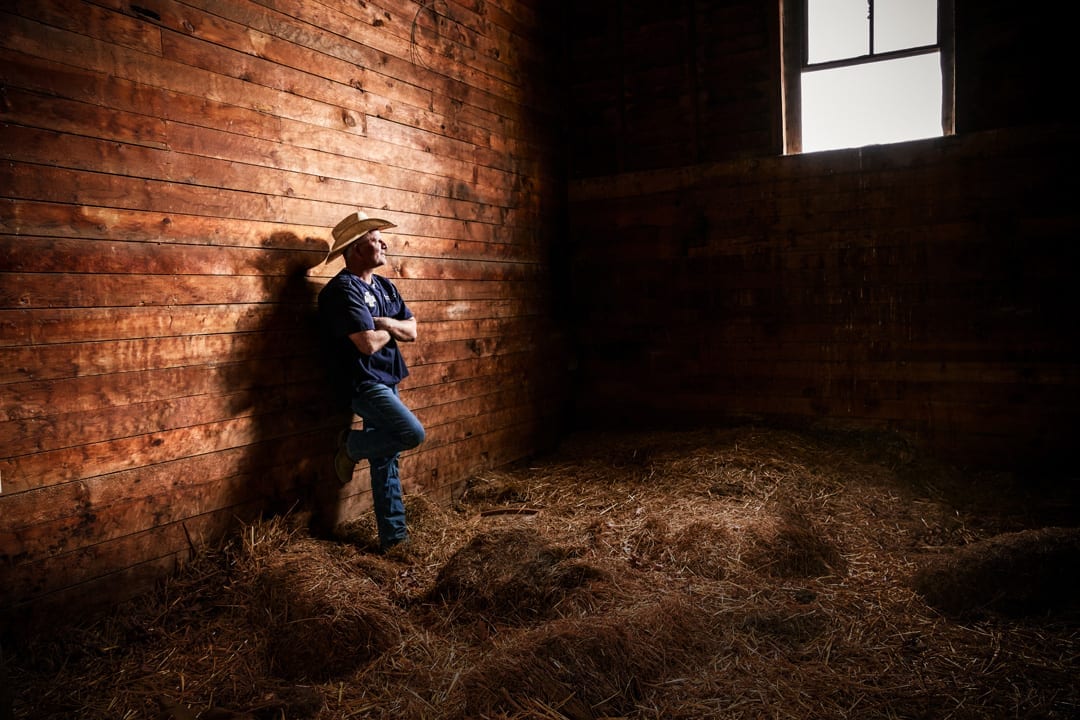 Dr. Patrick Young is a large animal veterinarian who moved to Central Oregon from the South in 2014, bringing along his Texas drawl, cowboy hat and boots and habit of chewing tobacco. The last of ten children, seven of which are medical doctors, Young bucked tradition when he “cowboy’d” for two years on a ranch before going to vet school.

Young was one of many who rose to the occasion to help Norris. He describes himself as a mobile “horse mechanic” who travels all over Central Oregon diagnosing and treating high performance horses like Norris. “I just fix their wheels,” he said modestly.

He’s humble, but in fact Young is a specialist in equine lameness, arguably one of the most challenging diagnostic puzzles a vet can face. He carefully takes in every muscle movement, the geometry of the horse’s gait, and the speed and force of each foot fall, following up with modern diagnostic tools like x-ray, MRI and ultrasound. Young also heads a biotech company and has successfully researched and licensed a new vaccine for pigeon fever in horses. His passion for creative problem solving is exactly what Norris needed.

There’s a saying about horses that dates back to the 18th century and persists to this day: No hoof, no horse. Horses with poor feet often end up in constant pain and suffer from severe lameness. When the Valentas first called Young to look at Norris, “It was definitely a lot worse than I envisioned,” he said. “It was definitely a bigger problem than what they thought it would be. But I thought it was fixable. I think everything is fixable. I think I have an ‘S’ on my chest.”

After watching Norris and taking x-rays, Young began treating his ailments with a series of progressive treatments like corrective shoeing to reshape his hooves and cocktails of antibiotics and anti- inflammatories, “voodoo” as Young calls it jokingly, to treat the infections and abscesses that were also growing.

For weeks at a time, Lisa and Kevin had to fill a bucket with water, epsom salts and betadine, unwrap Norris’s foot and place it in the bucket, make him stand there for twenty minutes, pack the hoof with epsom salts, rewrap it, then place it in a protective boot. Norris waited patiently in his stall, healing and resting for the next round of treatments. 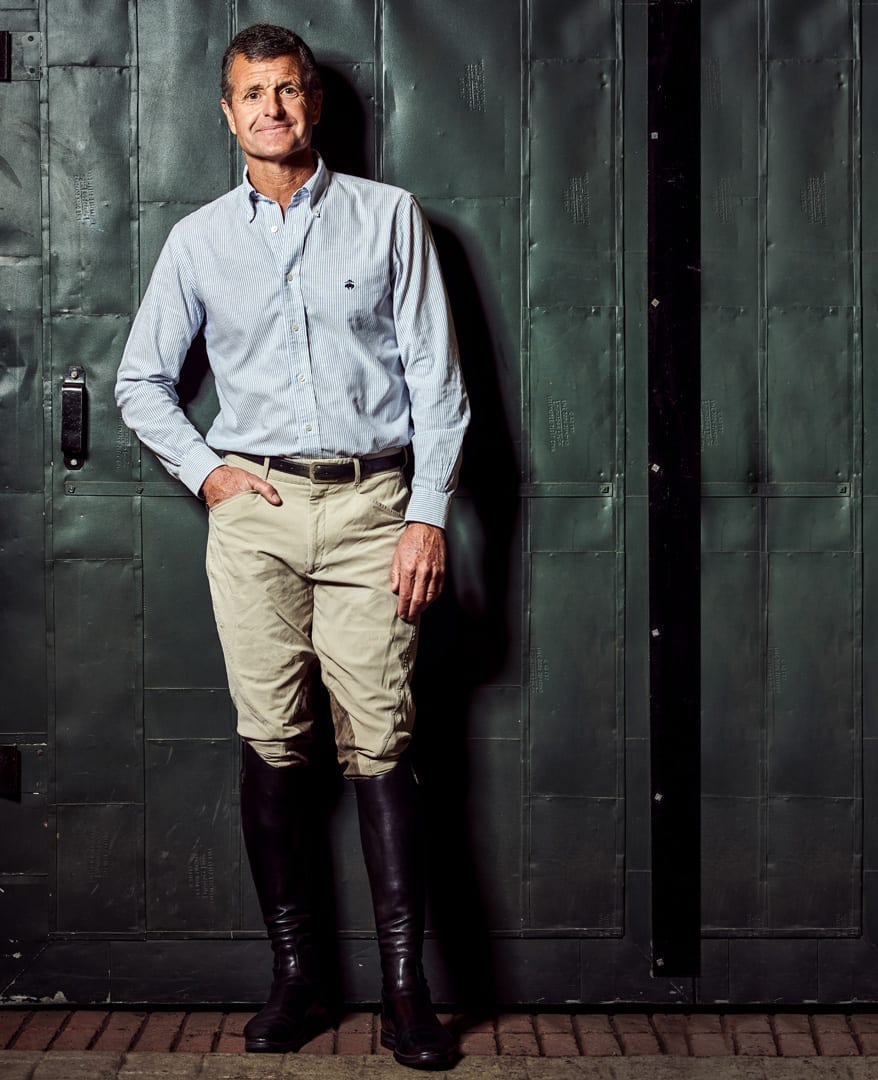 For most of the 20th century, thoroughbreds ruled jumping competitions. In the 1980s, though, European breeds began to take over, displacing domestic thoroughbreds. “It was hard to be competitive with those horses,” said Jeff Cook, a trainer who works with Norris. “You might go through twenty thoroughbreds to find one that truly is competitive. There’s a risk to it.”

Many thoroughbreds were left without a second career after racing, creating the risk of an excess supply of retired race horses. Recently, there have been efforts to get thoroughbreds back into the hunting and jumping competition. Cook has a soft spot for thoroughbreds like Norris, especially those in the competitive hunting and jumping world. “I love a thoroughbred, refined type, and that he is,” said Cook, who is renowned for his discipline and decades of experience training horses. He spends his entire day around horses. It’s hot and dirty work, yet Cook manages to stay as crisp and clean as when he walked in that morning.

Adding to the challenge, thoroughbred horses in particular are known for having sensitive feet due to their flat and thin soles. Foot problems can shorten a horse’s athletic career and contribute to inactivity and muscle atrophy. Those that don’t have access to quality veterinary care or resources are euthanized.

Jeremy Thompson is a local farrier, the guy called in to work with Norris’s hooves. “He’s had a lot of recovery,” said Thompson. “His feet are way better than when I met him. He had no heels. He had abscesses constantly. He had issues with soundness, being able to walk out without any signs of lameness. From what I saw when he showed up at our place in the beginning of winter is 100 percent better than it was.”

With corrective shoeing, Thompson is working on getting Norris’ hooves to grow more naturally upright, instead of flattening out like they are prone to do. It will give him more support, which is healthier for the hoof and better suited to jumping.

Norris’s tenacious personality showed through even in the initial treatments and encouraged Valenta. At one point while he was on stall rest for a month, he jumped up and over the top of his stalls without touching anything—from a standstill. An incredible feat for an almost 1,500-pound horse. It’s part of what draws people to Norris and what encourages the community to find solutions to his problems.

“I had some really frank discussions with Dr. Young about whether we should keep him as a sport horse or whether we should find a home for him that would be less demanding,” said Valenta. “I just keep getting encouraged to keep on with it, because he is such a nice horse, that we feel in maybe another six months to a year, he’ll be in a position to really see what he can do. It’s doable, it’s just going to take time.”

Lisa and Kevin have taken on a huge risk with Norris. If he does respond to treatment, the question remains as to whether he will be competitive. “Hopefully he’s going to really love jumping,” said Lisa. “If he doesn’t love jumping…” she trailed off for a moment looking at Norris. “He’s such a cool horse.”

Back in the Saddle 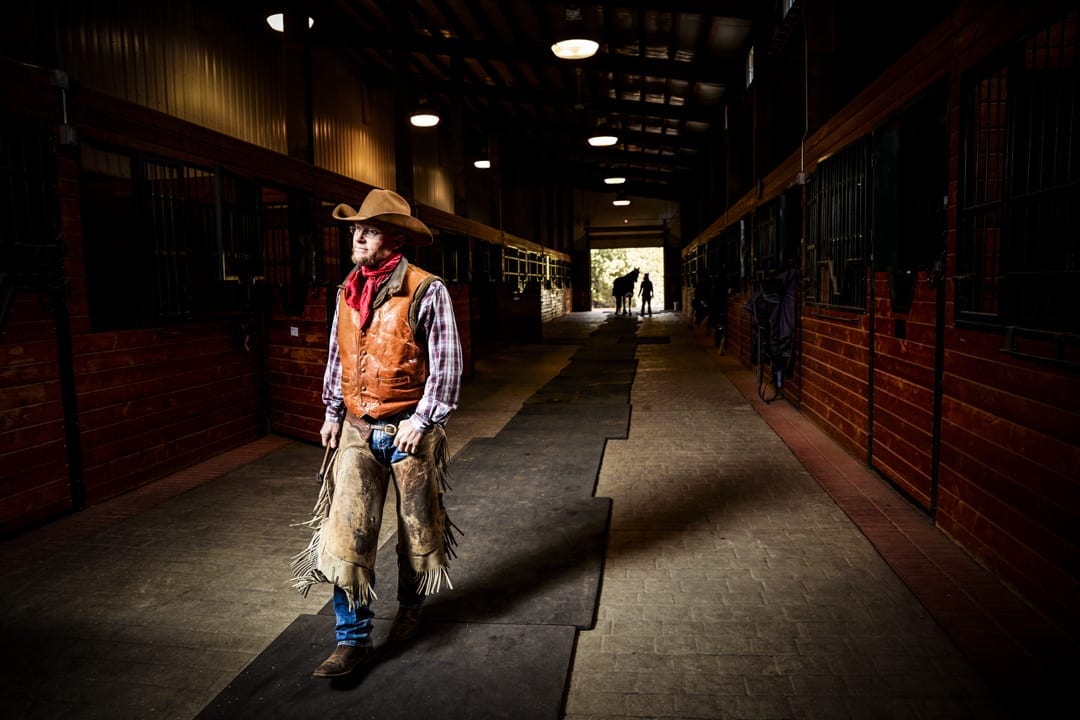 At the end of January, after dozens of epsom salt soaks, antibiotics, new shoes and wedges, stall rest and numerous other therapies, Young made another barn call to assess Norris’s progress. Norris was feeling good, perhaps a little too good. His energy had been contained a little too long in a twelve-by-twelve-foot stall. Everyone has learned that when Norris decides to rear and stretch his legs, there isn’t a lot that can stop him, which is exactly what he does.

Norris slipped away from his handler and ran hell-bent for the leather, as they say, in the opposite direction. The onlookers watched attentively. Seeing a horse like Norris strut his stuff can fill you with exuberance. But with his physical limitations, it can also make you cringe, hoping he doesn’t re-injure his sensitive soles.

Young broke the silence. “He looks pretty fucking sound to me,” he said, before they all chased after Norris.