You are here: Home / Culture / Outdoor Concerts and Music Festivals This Summer

Mark your calendars for these concerts and music festivals in Central Oregon this summer. 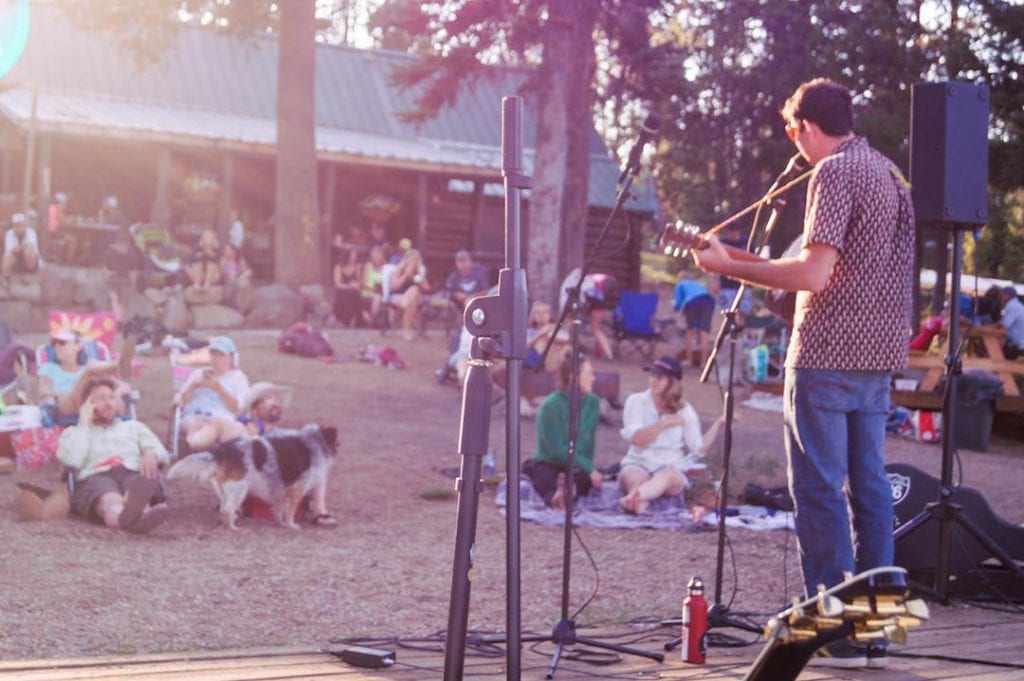 While Central Oregon regularly produces a solid lineup of shows and festivals throughout the year, summer is really where we hit our stride. From raucous shows on the lawn at the Les Schwab Amphitheater to folk festivals out on high desert ranches, these are the concerts and music festivals in Central Oregon and beyond that you don’t want to miss this summer.

Note: This list will be updated as more shows are announced and dates are confirmed, so check back throughout the summer for the latest shows.

In a pairing that ensures the music gods were looking out for Bend this summer, singer-songwriter Ray Lamontagne and Neko Case (with her first solo album in five years) will be performing at the Les Schwab Amphitheater and opening a summer concert lineup of your dreams.

Reggae band Slightly Stoopid will be in town again this summer. If last year’s performance is any indication, the reggae band will throw a party the whole town will be talking about.

One of the region’s best places to listen to live music in the summer is also one of the most scenic. Elk Lake Resort hosts a series of outdoor concerts for everyone. This season kicks off with Corner Gospel Explosion.

Is there any other town that loves Michael Franti more than Bend does? Back again this summer, Michael Franti will be taking over the lawn at the Les Schwab Amphitheater with his feel good summer jams.

Singer-songwriter Chris Isaak kicks off the Clear Summer Nights concert series at the Athletic Club of Bend. The musician is known for the hit songs “Wicked Game,” “Baby Did A Bad Bad Thing” and “Somebody’s Crying.”

Each year, 4 Peaks Music Festival brings in some of the best acts in bluegrass, folk, Americana and more to a four-day festival in Bend. The event includes plenty of camping sites and activities for the whole family to enjoy.

Rock bands Primus and Mastodon take the stage by the Deschutes River. These two acts bookend the “prog” rock genre but share a cult-like following. Pack your “moshing” shoes and your ear protection. It’s about to get loud.

Spend one of the longest days of the year, at least in daylight terms, up at Elk Lake for an outdoor concert featuring Bill Keale. Pack some chairs for a picnic or eat at the lodge while you listen.

ZuhG is a jam group from Sacremento that will surely have the crowd on its feet at Elk Lake Resort.

The Crawfest Music Festival is a three-day music event that rocks Powell Butte in July. You’ll rock and roll, country, hip hop, EDM and more across two stages at an old ranch. There’s local food and drink vendors onsite as well as activities that the whole family can enjoy, including a nightly bonfire. It’s also one of the most affordable summer music festivals in Oregon.

Steve Martin has completed one of the most successful pivots in show business and we are fully on board. Actors and comedians Steve Martin, also a successful folk musician, and Martin Short will be at the Les Schwab Amphitheater to perform their comedy/music act. The Steep Canyon Rangers and Jeff Babko will also be performing in the show dubbed “An Evening You Will Forget for the Rest of Your Life.”

Bluegrass connoisseurs won’t want to miss the Wheeler County Bluegrass Festival held in Fossil. The annual show brings out bluegrass bands to entertain throughout the weekend and hosts other activities and events for families.

A Central Oregon favorite, Broken Down Guitars will be playing at Elk Lake Resort on July 7. Get to the resort early to find a spot because this concert will be busy.

Bookends, a Simon and Garfunkel tribute band, will be playing at on the shores of Elk Lake.

Hometown band G Bots and Journeymen will be at Elk Lake. Take a break from your normal weekday routine and head up to the lodge to listen and a enjoy a hot summer evening.

Seventies icon and erstwhile Eagles collaborator, Jackson Browne makes a stop in Bend on his West Coast tour. The “Running on Empty” singer-songwriter is a must-see for classic rock lovers.

Everyone’s favorite rock-country-pop crossover Sheryl Crow will be at the Les Schwab Amphitheater this summer. Her last studio album was released in 2017.

A Pacific Northwest favorite from Portland, The Decemberists arrive on the banks of the Deschutes River on July 26. The band always puts a great show and will be performing songs from their newest album, I’ll Be Your Girl.

Don’t miss this music festival in La Pine, a benefit for Defeat MS. The Newberry Event Music & Arts Festival in the woods at the Diamondstone Guest Lodges will have more than twenty bands throughout the weekend. It’s a family-friendly festival full of activities everyone will enjoy.

From Redmond, Kayleb James and his guitar will be at Elk Lake Resort for a show.

Tickets are already sold out for this show. Willie Nelson takes the stage in August along with Alison Krauss, creating a folk lineup that will surely be talked about for awhile.

Doc Ryan and the Whychus Creek Band is an Americana and blues band taking the stage at Elk Lake Resort in August. It’s a popular band in the region that always puts on a great show.

The seminal alt-rock band of the 1990s is still going strong and will be in Bend at the Les Schwab Amphitheater  playing songs from a catalog that reads like college radio playlist circa 1993 along with material from the more recent studio albums from 2015 and 2016.

The rock, folk and soul singer-songwriter Amos Lee (“Windows Are Rolled Down” ring a bell?) comes to Bend this summer on tour with his most recent self-produced album.

Bend indie-rock band Cosmonautical, who released their first album in 2016, will be at Elk Lake this summer.

Playing “mostly Grateful Dead songs,” Joe Russo’s Almost Dead will take the stage at the Athletic Club of Bend this summer. The rock band was formed in 2013 in Brooklyn.

Summer plus concerts plus Bend equals reggae. Rebelution, a popular reggae band, will be in Bend at the Athletic Club of Bend to perform for a night.

Around for more than a decade, the Moon Mountain Ramblers are a favorite local band in Central Oregon that takes bluegrass to a new level.

They bring down the house every year. Steve Miller Band and Peter Frampton will once again perform by the river and will produce a show that is one of the most popular tickets in town.

With a new album under her belt, Brandi Carlisle will be in Bend at the Les Schwab Amphitheater on August 25. The singer-songwriter puts on sought-after shows that everyone will love.

Fans of American and folk music will want to head to Elk Lake for the Honey Don’t concert in late August.

The rock band that you couldn’t get out of your head in the late-nineties and early-aughts will be at the Les Schwab Amphitheater in August. Dave Matthews Band recently released its ninth studio album. Update: Tickets have sold out.

Portland darlings Portugal. The Man, fresh off their recent Grammy win, will be at the Les Schwab Amphitheater. Tickets are already on sale and are likely to go fast, so get yours now if you want them.

Soak up the last days of summer at Elk Lake with a performance from Melanie Rose Dyer and Daniel Cooper in style they call “American roots music with R&B influences.”

After last year’s wildfire season left the town of Sisters too smoky to host the Sisters Folk Festival, the festival returns this year with high hopes. The festival always brings some of the best acts in folk, Americana and bluegrass music to the Western-themed town for a weekend with music around every corner.

The Head and the Heart
September 19
Les Schwab Amphitheater

Indie-folk favorite The Head and the Heart will be at Les Schwab in one of last days of summer. Portland band Blind Pilot will also be on stage with them.