You are here: Home / Culture / Community / The History and Future of Bend’s Roundabouts

Bend is roundabout city! How did this all begin and where are we going?

Whether you call them “whirlymajigs,” “roundyrounds,” “those crazy car circles” or occasionally something less charitable, everyone in Bend is familiar with the roundabout. In the past two decades, roundabouts, also known as traffic circles, have sprung up everywhere throughout the city, with the prospect of even more to come.

The roundabout origin story dates to sixteenth century Europe, when circular junctions for pedestrians as well as horse carriages began to appear, such as the iconic Place de l’Étoile that surrounds the Arc de Triomphe in Paris. The idea stuck and evolved, hopped the globe and ended up in Central Oregon as early as the late 1960s at the Sunriver resort south of Bend, among many other places, as an elegant traffic solution with a proven safety record. 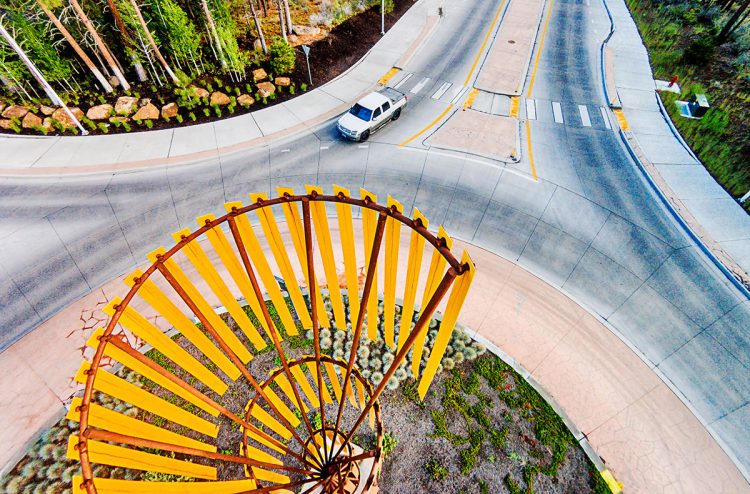 Inspired by his travels to Europe, Bend resident and Brooks Resources Chairman Mike Hollern first stepped up in 1997 to offer to build the city’s first roundabout at the intersection of Washington Drive and what was then Century Drive and is now Fourteenth Street. Bend’s west side was experiencing major growth-related traffic issues, and Hollern envisioned Europe’s well-tested roundabout concept as a practical answer to Bend’s growing pains. “I’d seen how well roundabouts worked there, and the Century Drive/Washington Center site seemed like an obvious place for one,” Hollern recalled.

What he didn’t expect was a surprisingly contentious “not in my backyard” reaction to the proposal. Widespread concerns included confusion about how to drive through a roundabout, too many merger points, driver speed, cutting through the rounded corners, and pedestrian and bicycle safety. “There was major concern by neighbors, the fire department, truckers and even the school district over the ability of buses to navigate a roundabout,” Hollern said.

Major education initiatives led by Brooks Resources, the City of Bend and the Oregon Department of Transportation, including a particularly successful public meeting, eventually cooled the rhetoric. The messaging stressed the well-documented safety and community benefits of roundabouts compared with traditional traffic-light intersections. Roundabouts, it was communicated, reduce commute time and driver aggregation. The traffic circle also reduces stops, starts and idling, resulting in less gas and diesel emissions, making the option more environmentally friendly. But most impactfully, roundabouts result in significant reductions in the number of both serious and minor traffic accidents compared to intersections, as well as fewer instances of property damage. 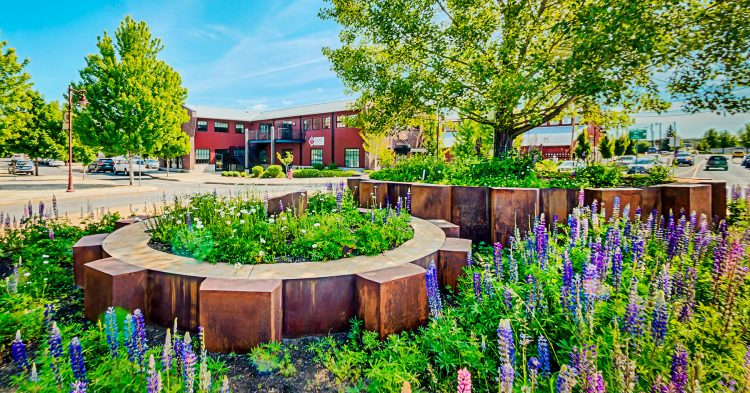 Current City of Bend Engineer Ryan Oster points to several factors behind a roundabout’s inherent safety, which include fewer potential conflict points and reduced speeds, giving drivers and pedestrians more time to react and resulting in a reduction in both crash frequency and crash severity. “Consider the typical accident that could occur at a roundabout,” he said. “It happens between a vehicle already in the roundabout driving at a lower speed, sideswiping a vehicle trying to enter the roundabout. Due to the angles in the roundabout, a more severe head-on or T-collision rarely occurs.” By contrast, he added, “In a traditional intersection, it’s not unusual to see a more severe, high-speed collision.”

Safety won the argument. With concerns and red tape removed, Hollern got the green light in 1999 from both the city and ODOT to build Bend’s first roundabout. 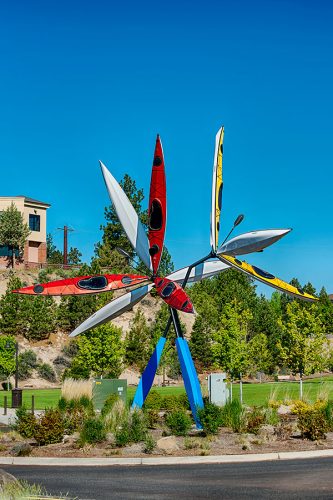 That first roundabout launched two decades of an extraordinary build-out of roundabouts in Bend. The cost to Brooks Resources and others in a west side consortium for the first roundabout was between $300,000 and $400,000—a bargain compared to the current cost of new roundabouts, which extend into the many millions.

Nevertheless, Bend and its citizens took to the solution. In fact, as residents and planners experienced the well-documented safeties and efficiencies of roundabouts for themselves, the city adopted a “roundabout-first” policy. Oster explained, “We run every intersection through a rigorous evaluation comparing roundabouts with other intersection forms, such as stop signs or signals. Unless there are excessive cost or design issues, our first choice will be to recommend upgrading with a roundabout.”

Today, Bend’s roundabout count is forty-two and growing, earning Bend the distinction of having more roundabouts than any city in the state. In fact, Hollern said it is worth noting that there is not a signalized intersection west of the Deschutes River in Bend, thanks to the prolific growth of roundabouts.

Looking ahead, according to Oster, the combination of funding from the recently passed $190 million transportation bond and the city’s current transportation capital program have created the potential for between thirteen and fifteen new roundabouts over the next ten years. 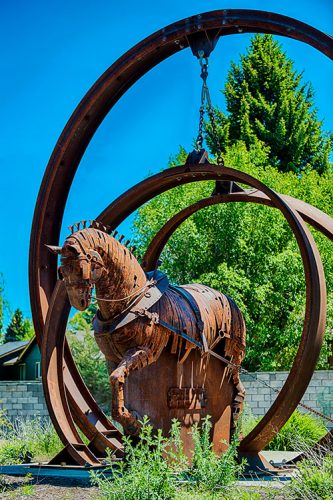 Art: Might of the Work Force by Devin Field | Photo Courtesy of Visit Bend

And Now We Shall Make it Pretty

After the first couple of roundabouts were installed, it didn’t take long for someone to wonder what to do with all that sterile, empty space in the center. Enter the extraordinary work of Art in Public Places, a Bend nonprofit funded by the Bend Foundation that has donated public art throughout the city since 1973. “The short story of AIPP is that a number of community-minded moms, led by Sue Hollern and Jody Ward, wanted to bring art and culture to town,” explained AIPP Project Coordinator Marcelene Trujillo. “We started as a pot show, as in pottery, not weed, and then thought we could do some good things for Bend by placing art in public places,” said Hollern. “It has been a great ride and we feel we have contributed to making Bend a special place.”

Roundabout sculptures quickly became a focal point for AIPP, which collaborated with the Bend Foundation, the City of Bend and several private donors to get the roundabout art project off the ground. Some of the first pieces to appear were “Sunrise Spirit Column” by David Govedare at Mt. Washington Drive and NorthWest Crossing Drive, and “Redsides” by Miles Addison Pepper at Simpson Avenue and Colorado Avenue, installed in 2001 and 2003 respectively.

So popular is this eclectic collection of sculptures that Visit Bend, the city’s tourism promoter, created a self-guided tour brochure featuring more than twenty of the city’s more eye-catching, conversational roundabouts. Consider Frank Borden’s “Rising Phoenix,” more affectionately known to locals as the “Flaming Chicken,” or the family of deer cast in bronze by Joe Halko, playfully titled “Big Ears,” which sometimes sports a Santa hat or face mask. In 2005, Americans for the Arts honored Bend’s collective roundabout art sculptures as among the most innovative approaches to public art in the country.

And there’s more to come. Over the next two years, AIPP, the City of Bend and the Bend Foundation will select artists to create large-scale roundabout sculptures at Powers Road and Brookswood Boulevard, Fifteenth Avenue and Murphy Road, Colorado Avenue and Columbia Streets. Empire Avenue/Butler Market Road/Twenty-seventh Street. 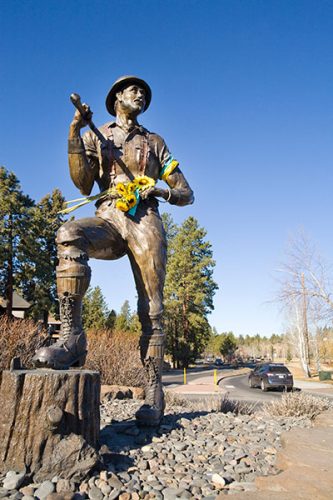 World Record Holders – Not So Much

At forty-two roundabouts and counting, one would think that Bend surely ranks as one of the largest per-capita-concentrations of roundabouts in the country. As for those roundabout visions of grandeur, Bend, sorry—not even close. In Oregon, yes, it’s true that no other community can match Bend’s number. But several states, including nearby Washington and Colorado, can boast communities with seventy-plus roundabouts.

The title for roundabout king of the United States belongs to Carmel, Indiana. With a population just over 100,000 (not that different from Bend), Carmel has more than 140 roundabouts, with over a dozen more to come. Again, not unlike Bend, it took some public persuasion for Carmelites to accept the concept. “When we first started, there was a lot of skepticism,” said Mayor Jim Brainard. “But after people started to drive them—I couldn’t remove one today if I wanted to.” The fight today, he said, is over which neighborhood will get one next.

Looking back, neither Hollern nor another long-time community leader, Bill Smith, are surprised at how well roundabouts have been received over the years. Smith, who has funded two roundabouts within his Old Mill District development, noted, “with their art, roundabouts give various areas of the community a sense of place—a traffic light can never do that.”

Going forward, Smith encourages the city to continue with its “roundabout-first” approach. “If I have a concern, it would be that the city would think of saving money by not maintaining or building more roundabouts,” he said. “I would like to see the city budget for art in the new roundabouts, and make the art a requirement of the facility, not just an afterthought.”

So just how safe are roundabouts compared with traditional traffic-light intersections? City of Bend Engineer Ryan Oster cited numerous local and national studies that show a seventy-two to eighty percent nationwide reduction in personal injury crashes, and a thirty-five to forty-seven percent reduction in all crash types, in roundabouts versus traffic signal intersections.

Here are a couple of Bend roundabouts built within the past five years that have produced striking safety numbers.

Murphy Road and Parrell Road
Previously a two-way-stop controlled intersection. In the five years before the roundabout was installed, the city recorded six crashes resulting in personal injury and one property-damage-only crash. In the five years after the roundabout installation, they recorded just one personal injury crash and one property damage crash.

Reed Market Road and 15th Street
Previously a signalized intersection. The city recorded twenty-six personal injury crashes and sixty-five property damage incidents in the five years prior to the roundabout installation. In the five years after installation, the city saw a dramatic reduction in both types of crashes with only eight personal injury crashes and only sixteen property-damage-only crashes.