You are here: Home / Homepage: Slider / The old Scottish sport of curling slides its way to Bend

On blustery Sunday evenings from November through February, most folks tuck into their cozy homes to wind down the weekend. That’s not the case for Bend locals Shawn and Joe Anzaldo. They’ll be bundling up and heading out to the Pavilion, Bend’s sole ice rink, to join a group of hardy souls with brooms over their shoulders, grippy-soled shoes on their feet and huge smiles on their faces. These are the curlers, and Sunday evening is league night. 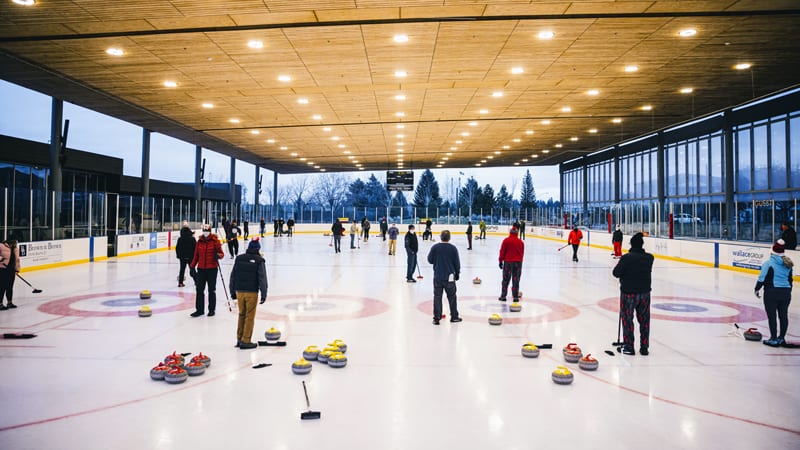 “Yep, it’s cold. Freezing, literally. Sometimes the games go late, and the scoring is complicated. But it’s so dang fun—and I love being part of this team,” Shawn said.

What draws people to this sport? It’s accessible—anyone can play. The slo-mo glide of the rock across the ice is mesmerizing, and the final scoring is unpredictable until the last push. And on dark, cold winter nights, curling league at the Pavilion can be the hottest spot in town.

The game has been refined since its origins in Scotland hundreds of years ago—think woolen tweeds swapped for puffy jackets and frozen ponds for covered ice rinks—but its heart remains the same: a team sport that is simple to learn but difficult to master, a serious competition with room for laughs and silliness, and a way to actively gather with friends and embrace the cold dark winter. 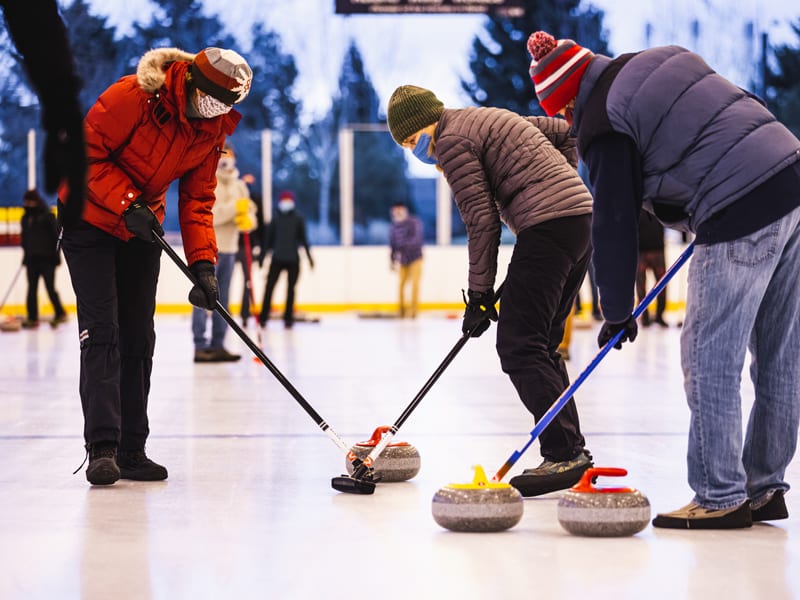 Curling is a 500-year-old Scottish pastime that can be described as a winter version of shuffleboard. History suggests it began in the 16th century when a Scottish monk and his cousin began sliding stones across a frozen pond. That friendly competition grew into a team sport that spread across winter-loving cultures from the Netherlands and Scandinavia to Canada. Since the Pavilion opened five years ago, it’s taken hold in Bend, as well. 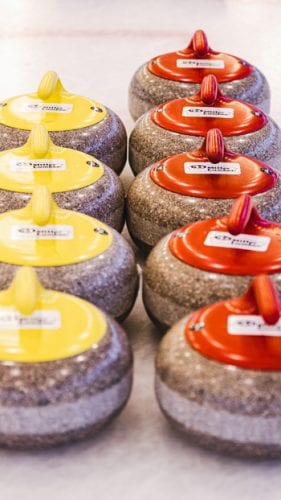 Modern curling involves two teams of four players who take turns sending stones, carved from Scottish granite, down a narrow sheet of ice, 146 feet in length. One player delivers the stone with a graceful, lunging push, sending it gliding toward the target. Two players then use specialized brooms to furiously scrub the ice ahead of the moving stone, to guide its path. The skip, or team caption, stands behind the target calling out instructions for the sweeper: “Scrub hard! Let it curl! Off!” The strategy lies in guiding the stone to land within the target—and to knock opponents’ stones out of play. All points go to the team with the stone closest to the button, the center of the target.

As outdoor temperatures drop in early November, the Bend Park and Recreation District begins preparing the Pavilion’s ice for skating, hockey and curling. Four permanent curling lanes stretch the length of the rink, with concentric rings (the “house”) embedded in the ice at the lanes’ ends. Meanwhile, hopeful curlers wait for the park district’s curling league registration to begin.

“Registration for teams opened at 8 a.m. this year, and we had twenty teams signed up by 8:05,” said Joel Lee, program coordinator at the Pavilion. Forty teams can participate in the Sunday evening league. The district has added a Wednesday brunch league and drop-in “Learn to Curl” clinics on Friday mornings. All gear for league games is provided—stones, brooms, grippers and sliders (see sidebar).

Lee credits the welcoming, laid-back atmosphere for the sport’s popularity in Bend. “Curling is not like most team sports because it’s new for almost everyone. Experienced players love to help, and people learn quickly that it’s just as fun as it looks,” Lee said.

The Anzaldos have played for several years on the Miller Lumber Legs team, with skip Charlie Miller. The camaraderie keeps this tight-knit crew coming back for another season. Each player goes by a nickname, and Miller keeps them entertained and connected with game recaps that highlight moments big and small. All the teams find ways to keep it fun—some wear matching hats or outfits. “We see a lot of plaid and wigs,” said Lee and laughed.

On Saturday evenings throughout the winter, the Bend Curling Club takes over the Pavilion. This group of curling enthusiasts works with the district to support the sport. They arrive early to set up equipment and spray water droplets on the lanes to pebble the surface. The sessions begin with instructions for newcomers, covering everything from how to avoid falling to proper lunging form. And then the games begin, with a bit more intensity and competitive strategies than seen in the Sunday leagues.

Many club members have past experience with curling. Instructor Janice Robbins remembers curling as a child in New England. “We didn’t have real stones. We filled tea kettles with water to push across frozen ponds all winter,” she said. Another curling club member, Roma Larsson, joined soon after relocating to Bend from Canada. “I played quite a bit in Canada, so I was thrilled to find a curling group here in Bend,” she said. Some members, like Jason Burge, just fell in love with the game and the community that surrounds it.

Burge serves as the curling chairperson for Bend Ice, the community organization for ice sports in Bend. His love of curling began as a spectator, watching the Olympic games and learning the strategies that give curling it’s nickname, “chess on ice.” As a player, he’s drawn to the social side as much as the competitions. “It’s a gentleperson’s sport. We all help each other, even if we risk losing an advantage,” Burge said. “Plus, there’s broomstacking (a post-game gathering) after the games—winners buy the beer!” he added. Bend Curling Club members also travel to regional competitions, often in Portland and Salt Lake City. 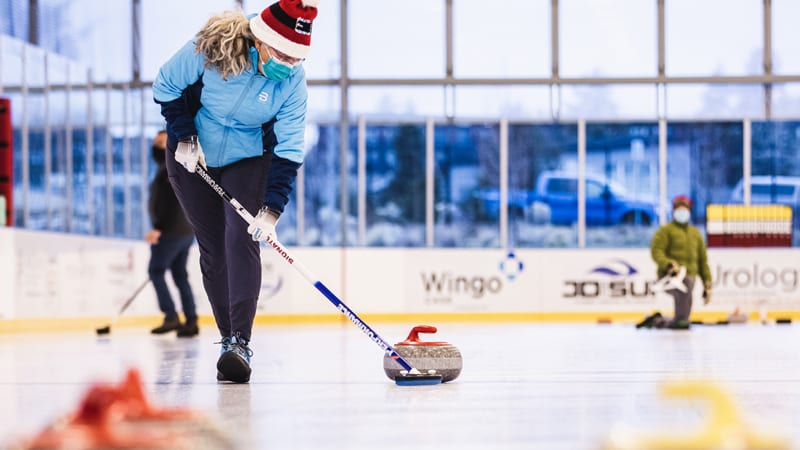 The Bend Park and Recreation District and Bend Curling Club have adapted the curling rules as needed to prevent the spread of COVID-19. Curling is one sport that is particularly suited for COVID-prevention guidelines. This year, teams use one sweeper at a time instead of two. Players stand apart, and the four lanes start the games on alternate ends. The open walls of the Pavilion keep fresh air circulating, and as Burge noted, “It’s not so bad wearing a mask when we’re playing in cold temperatures anyway.”

Bend Curling Club has doubled its roster to sixty members since its inception in 2016. They plan to keep reaching out to local athletes of all ages and abilities and generating support for additional ice space in Bend. Learn more about the club at bendice.org or the Bend Ice Curling Facebook page, and check out BPRD curling opportunities at bendparksandrec.org. Then get your rock, your broom and go for it!