You are here: Home / Adventure / Timberline: King of the Hill 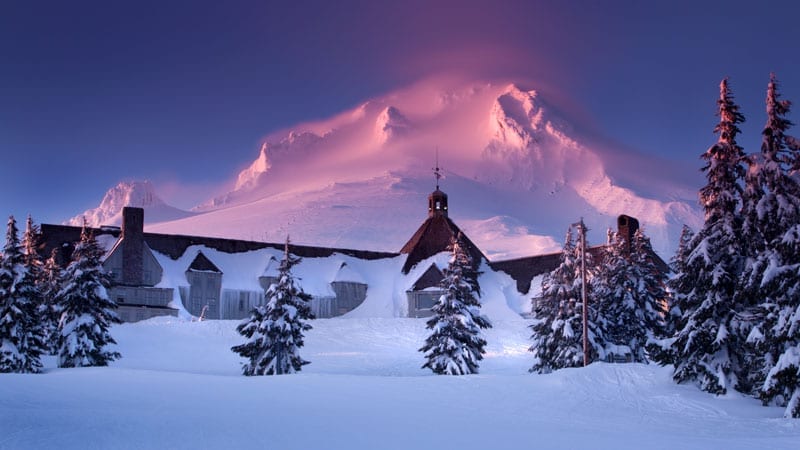 “The weight of history” is a cliché, but in certain exceptional places, the phrase nevertheless thrums in your mind. Timberline Lodge on Mt. Hood just feels heavy. Weighty with timber and stone, solidly built on the flanks of Oregon’s highest peak, yes—but also heavy in spirit. There is a heft to the atmosphere in the old lodge’s creaky hallways, a heightened gravity that pulls you into a worn chair twice your age, a settling in the air that hints at the thousands of people who have visited here over decades. Out the windows, the weight of time itself emanates from the rugged basalt of the mountainside.

Timberline Lodge was completed in 1938, built during the Depression by the Works Progress Administration as part of President Franklin Roosevelt’s New Deal. The project was meant to boost the economy, but the assembled workers were also tasked with creating a stately lodge in a difficult location—an elevation of nearly 6,000 feet on the side of a volcanic peak. Among other challenges, the craftsmen had to construct and enclose the exterior in one summer season, before the snow fell. Economy, ingenuity and speed led to innovative touches that today make Timberline so endearing—newel posts made from telephone poles, railroad ties bent into andirons, tire chains transformed into fireplace spark arresters. FDR and his wife Eleanor visited Mt. Hood for the lodge dedication in 1937, during which they were fed a luncheon of salmon and huckleberry pie. The lodge opened to the public the following year.

What happened very shortly thereafter was an unfortunately familiar story of decline, neglect, doors closing and someone suggesting the whole place be burned to the ground. Thankfully, that isn’t how this story ends. Luck, hard work, passion, a little bit of crazy—Timberline would never have reached the “weight of history” phase it enjoys today without a little of each. Richard Kohnstamm, the lodge’s fifth operator, took control of the property in the mid-1950s. He was determined to treat Timberline like he owned it, even though it was (and still is) government property. Kohnstamm moved his family in, he took a loss for the first five years, and he didn’t quit. His son Jeff remains the lodge’s operator to this day. 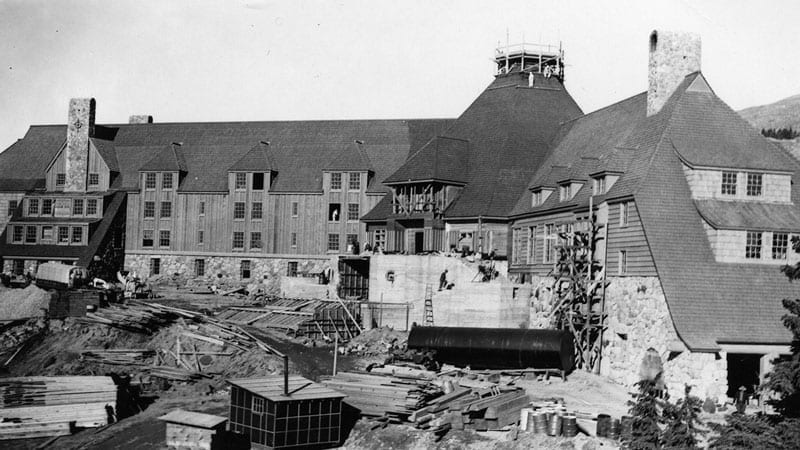 On the winter day of our arrival, my husband and I stood before an impressive painting of Kohnstamm in the lodge entryway, a room defined by significant features in stone, wood, wool and steel. As a National Historic Landmark that doubles as a working lodge, Timberline must adhere to strict guidelines whenever anything is reproduced, be it blanket or carpet or chair, so it’s a fair bet that everything you see looks a whole lot like it did when Franklin and Eleanor were here. The sound of a piano drew us into the Barlow Room, a common area near the entrance named for the toll road over Mt. Hood used by Oregon’s earliest settlers. The music was generated by a guest, who played a tune while her children explored the room, including the curious large-scale, leather-carved paintings that depict early Oregon life.

Timberline is open year-round and receives most of its visitors in the summertime. But winter is really the historic lodge’s home season, when the structure is cozy and compact under abundant snow, the mountain itself white and gleaming, the fireplace inside radiating heat. The Timberline Ski Area that literally surrounds the lodge is the obvious draw in the winter, but a surprising number of guests (like us) visit to observe the wintry magic from indoors, rather than venture out into it.

A great place observe is the lodge’s central room, known as the “head room.” Five hand-carved Douglas fir columns, each the diameter of a Volkswagen beetle on end, surround a massive stone fireplace. Windows face north, uphill with a direct view to the perfect peak of Mt. Hood (11,250 feet). We sat on hefty leather and wood sofa and gazed up the luscious alpine slopes. A flight of stairs took us to the Ram’s Head Bar, where nostalgia for my last (summertime) visit led me to the huckleberry margarita, while my husband chose a craft beer from down the hill at Mt. Hood Brewing Company in Government Camp. To the southwest, a pink and salmon colored sunset bounced off of the slopes. 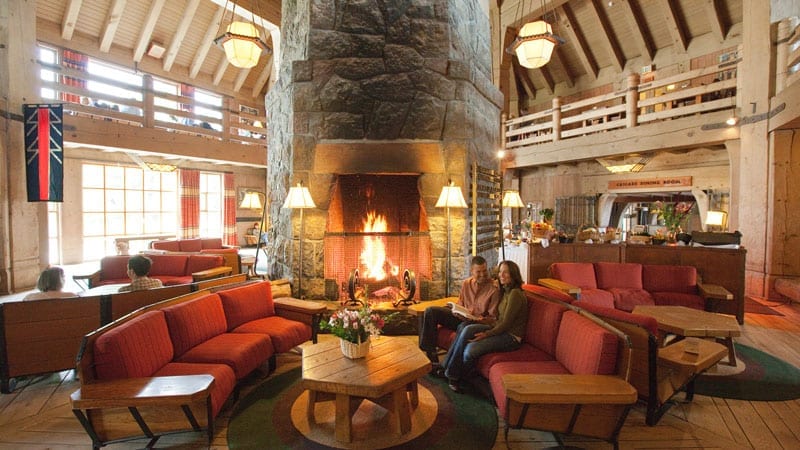 Dinner was back downstairs in the Cascade Room, a place defined by chunky wooden tables, low ceilings, tinkling glasses and utterly delicious food. We shared an arugula salad garnished with apple, radish and egg. My husband reveled in the much-recommended New York Steak with chanterelle mushrooms, while I enjoyed the Wild Pacific Salmon, accompanied by a glass of Sokol Blosser pinot gris.

In the morning, we awoke to the ice-grey clouds of imminent snow. The winding road down the mountain was calling, but first, we had a mandatory photo op to perform. When pressed, many visitors to Timberline admit that their urge to ascend the six miles from Highway 26 to actually see this place for themselves came not because of an interest in history, or in skiing, but in film—or rather one film: The Shining. That 1980 film looms large in the lore of Timberline Lodge, even though no one really talks about it on the property except in hushed tones, perhaps out of fear of ghosts, and anyway, only the exterior appeared in the movie’s footage. Still, countless people associate Timberline Lodge with a leering Jack Nicholson menacingly wielding an ax. If you ask nicely, the front desk staff will hand over a replica ax—inscribed with the words “Here’s Johnny!”—and let you pose for photographs with it. Which we did.

Share This Article
« If You Build It: Explosion of interest in pickleball is testing players allegiance to tennis
Sunriver Staycation: Exploring Bend’s original destination resort »