Among other accolades, Central Oregon is a trail runner’s paradise with hundreds of miles of trails from the ultra runner to the weekend warrior. Here’s the beta on a few favorites.

During the last half-million years, the Crooked River has carved a canyon through ancient compressed volcanic ash and basalt flow. Today, textured rock formations climb to 3,200 feet, creating a stunning outdoor playground that’s a high desert wildlife oasis and a geological wonderland. For rock climbers, Smith Rock is known as the birthplace of American sport climbing. With more than 1,800 climbing routes, it remains an international climbing destination. For trail runners, Smith offers grueling hills balanced with panoramas of the Cascade Mountains, sweeping views of the high desert and river canyon below, and no shortage of adventure. The park is open year-round, and the only time that’s not ideal for running is during the heat of summer.

The trail running options at Smith Rock extend as far as a runner’s imagination and sense of adventure. The classic trails go up Misery Ridge, Burma Road and Summit Trail. Misery Ridge can be accessed from the base of the footbridge by going straight up or by taking the River Trail to the left and going around to the west side of the rock spires. You can also jump on Summit Trail to the left via the River Trail or by taking a right from the footbridge and ascending Burma Road. Any of these trails can be combined for a four- to eight- mile loop from the welcome center. For seasoned runners, continuing east and north at the top of Burma Road-Summit Trail toward Gray Butte offers grassy meadows, sage, more juniper and a network of trails throughout BLM land.

The trail surface consists of hard packed clay, loose rocks and scree, so watch footing, especially on steep slopes or in wet weather. Bring water, wear layers and watch for rattlesnakes in warm weather. Don’t forget to glance up now and then to catch a glimpse of bald eagles, golden eagles, hawks, great blue herons and other wildlife. 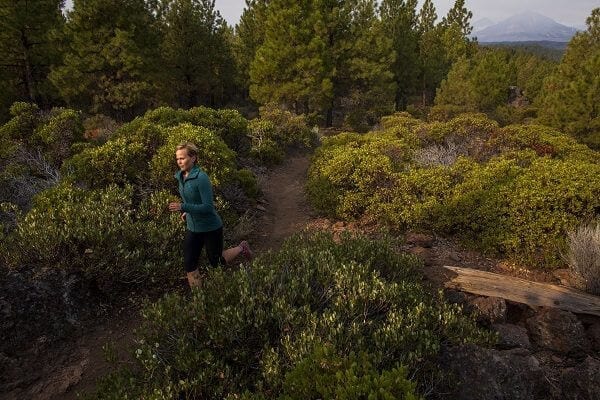 Thirty miles to the west of Smith Rock is the small town of Sisters and the Peterson Ridge Trail System. Beginning on the southeastern edge of town and ascending into national forest, the Peterson Ridge system gradually climbs toward Three Creeks Lake and the Three Sisters Wilderness, revealing views of Black Butte and the Cascade Range with each mile. Peterson Ridge trails are runnable throughout the year though they can get muddy after rainstorms or during periods of significant snowmelt.

The trails in the Peterson Ridge Network are not always clearly marked. Bringing a map is advised. The trail surface varies between dust, dirt and mud, depending on the time of year. Watch for rocks and be on the lookout for deer, elk and other wildlife. 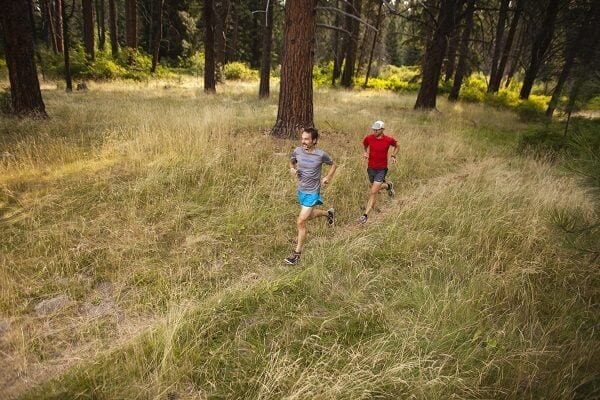 Jeff Browning, 44, in hat, red, and Ryan Ness, 40, enjoy a Sunday morning run on the trails in Bend’s Shevlin Park.

Within Bend, a small canyon burrows into the western edge of town and hosts a network of trails as well as access to the national forest beyond. Called Shevlin Park, the canyon is home to Tumalo Creek, which provides refreshment and wildlife habitat as the creek flows through—merging with the Deschutes River just north of the park. A great running option year-round, Shevlin’s towering ponderosa pines shade the canyon and help hold in cool air coming off the creek in the summer. Shevlin’s perimeter trails above the canyon stay snow-free through most of the winter. There’s a four-and-a-half-mile loop of rolling hills, and it’s easy to tack on three to four extra miles by looping up to the fire road on the south end of the park. From there, runners looking for a challenge can hop on Mrazek Trail and go another thirteen miles uphill to Tumalo Falls.

Keep an eye (and ear) out for great horned owls and bald eagles, especially at dusk. Aspen Groves turn the canyon gold in the fall. Watch out for rocks and roots that may try to snag your toes and beware of icy trails within the canyon during winter.