Central Oregon may be Oregon’s craft beer capital, but when it comes to hops, the industry doesn’t even come close to leading the production charge. 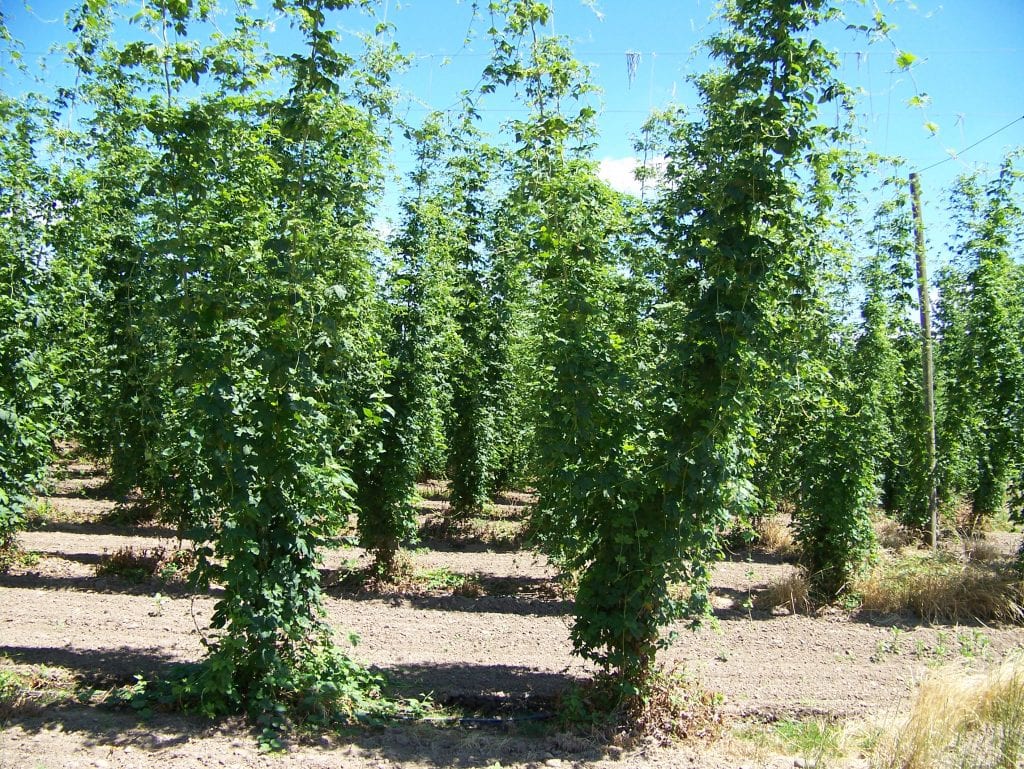 Central Oregon may be Oregon’s craft beer capital, but when it comes to hops, the (almost revered) ingredient that adds flavor and bitterness to each pint, the region doesn’t even come close to leading the production charge. That could change in the coming years, as hop yards sprout up around the region.

Eleven years ago, Gary and Susan Wyatt planted rhizomes on their property that would become their first hop bines. The decision made them the de facto leaders in the High Desert’s now burgeoning hops industry. Their farm, Tumalo Hops, was the first commercial hop farm in Central Oregon since the early 20th century. Since Tumalo Hops staked their bines, four commercial hop yards have started in Central Oregon and more are on the way.

Gary and Susan Wyatt next to their growing hop bines.

“All of the information we’ve learned in the last ten seasons, the dos and the don’ts of growing hops, we pass along to the other hop yards in Central Oregon,” said Gary. “We’ve shared all that information of how farming goes with hops and what you should do and how to plant them and what songs to sing so they’ll grow.”

Tumalo Hops sits on an unassuming five acres off Highway 20 in Tumalo. Both graduates of Bend High, the Wyatts have lived on the property since 1978. In 2006, Susan lost her job and decided she wanted to do something with their land. Cows were too expensive, and hay was out of the question with just a handful of acres. Hops turned out to be the perfect crop.

Through word of mouth and working with local homebrewer supply businesses, the farm grew. One relationship in particular helped make the farm successful. Trever Hawman, who graduated from home brewing to a commercial craft brewery when he founded Bridge 99 Brewery in Bend, buys ninety percent of the harvest from Tumalo Hops. The rest is sold to home brewers or as specialty purchases by other craft breweries.

The Wyatts grow six varieties of hops. A majority of the acreage is devoted to Cascade, the most popular variety. They do most of the work themselves, from planting to harvesting and transforming the hops into pellets. For a crop with so much history, the learning curve was still steep. “We read everything we could find,” said Susan. “It was lots of information, but it all pertained to the [Willamette] Valley or back east.”

Oregon farmers are no strangers to hop crops. The Beaver State is the nation’s second largest producer of hops behind Washington. Most Central Oregon craft breweries get their hops from the Willamette Valley or Yakima, Washington. Yakima is the leading region for hops with 30,000 dedicated acres. Central Oregon’s warm and dry climate is similar to Yakima’s, which makes it an ideal location for growing hops, though Central Oregon’s growing season of 120 days is a bit shorter than average.

Still, the Wyatts and other early adopters in Central Oregon believe that brewers will soon have more options to purchase hops from local growers. With only a smattering of acres of hops planted throughout the region, Central Oregon still has a long way to go before catching up to Yakima. Much like the way hops grow on the bine, it will be a climb.