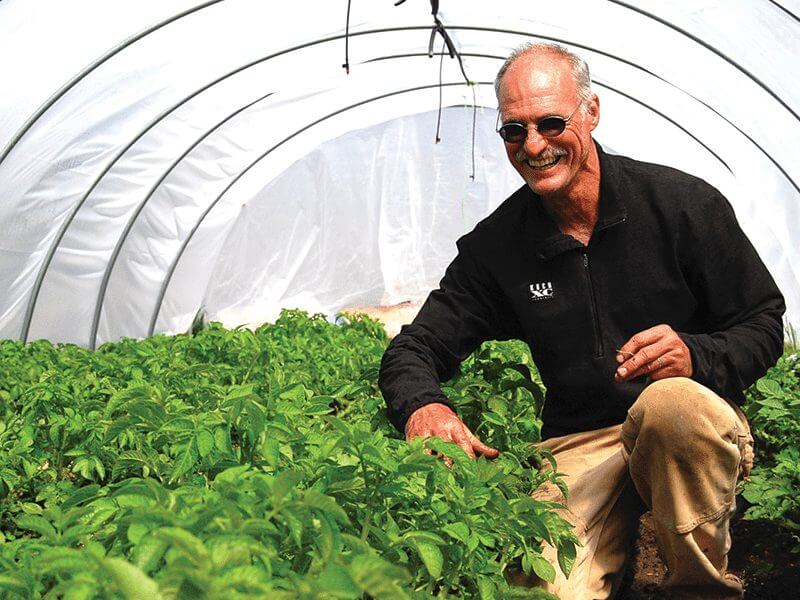 Two miles southeast of Pilot Butte, boxed in by housing developments, Fields Farm begins where the sidewalks end. In the midst of urban growth, the crops, hoop houses and little brown house draw a stark contrast.

For nearly thirty years, the ten-acre Fields Farm plot has yielded organic crops for a community that has grown up around it. It is one of the only working farms within the Bend city limits.

“We’re kind of like a frog in a pan of water on the stove—the town kind of blew up,” said Jim Fields of Bend’s expansion over the years. “We moved [here] thinking ‘maybe in-town is not for us,’ then all the acres around us sold to developers and the city moved out.”

When Jim and his wife Debbie bought the farm in 1987, Bend had a population of around 17,000. The couple, both working other jobs at the time, came up with the idea to buy acreage after gardening and composting in the backyard of their westside cottage. Two years later, they started a community-supported agriculture program with eight people. Today, their CSA provides vegetables and greens for more than sixty members, along with local farmers’ markets and half a dozen restaurants around town.

When asked how many kinds of crops they grow on the farm, Fields said he’s stopped counting. He described the CSA system like a magazine subscription, surprising members who sign up with different “articles,” ranging from asparagus to zucchini. Over time, the farm has remained organic and pesticide-free but Fields said some things have changed over the years, including an extended growing season with the building of greenhouses and improved soil that allows them to cultivate more plants in less space.

“The most effective way we’ve found to compost is using the waste hops from the breweries like Deschutes,” said Fields. “We used to do a mix with manure, but this works better and occasionally they’ll share a beer with you.”

Jim Fields said he grows more than just plants, as food cultivates community. Despite a small staff of three (Jim, Debbie and their friend Brian), the farmers still make time to host school trips for kids, and they keep their roadside farm stand stocked with veggies for anyone to stop and buy. According to Jim, it’s the giving back that keeps the neighbors from complaining about living next to a working farm and what motivates him to keep working with nature.

“The land doesn’t have to be farmed,” he said. “It could be growing houses, but we’ll stay around as long as we can.”  –Mary Hinds