The weeks they’d spent training with outrigger canoes in the Old Mill District seemed to be paying off. It was September 2019, and Bendites Jason Magness, Stephen Thompson and Dan Staudigel, along with teammate Mel Coombes of Spokane, had cleared the jungle river and were now muscling their wooden boat into the South Pacific off Viti Levu, Fiji’s largest island. Bear Grylls, the British soldier and star of television shows like Running Wild, circled overhead in a helicopter watching them.

Bear Grylls, center, and Mark Burnett, right, pose with a very clean field of adventure racers in Fiji at the start of “the world’s toughest race,” the Eco Challenge.

“Veteran adventure racers Oregon’s Bend Racing are out to an early lead,” Grylls said into a headset as a cameraman filmed him. “Are they burning it out too early? Or can they keep it going? I don’t know.”

The answer to that is complicated, which makes for awesome reality television. These were the early moments in the remaking of Eco Challenge, a show that ran from 1995 to 2002 and put adventure racing on the map. The reboot nearly two decades later lands as a ten-part series that opened on Amazon Prime August 14. Then, like now, camera crews follow teams of four as they hike, bike and argue their way for hundreds of miles across the unforgiving, wild contours of the map with only a compass to point the way. “People think, Fiji, ah, it’s just a beautiful Pacific island,” Grylls told me back in Suva, the capital, before the race began. “But it’s got extreme mountains, extreme jungle, rivers, ocean and swamps.”

Magness and crew were part of a massive Hollywood production that included 330 athletes from thirty countries tackling what’s billed as “the world’s toughest race,” an 11-day sufferfest that traces a punishing 471-mile line across Viti Levu. Along the way they’d build rafts to float green rivers, mountain bike into chain-caking mud and punch their way through canyons filled with tumbling waterfalls. The reboot isn’t just “bigger and badder by a long shot,” as Grylls said. It also puts some of Bend’s most talented adventurers in the international limelight like never before. 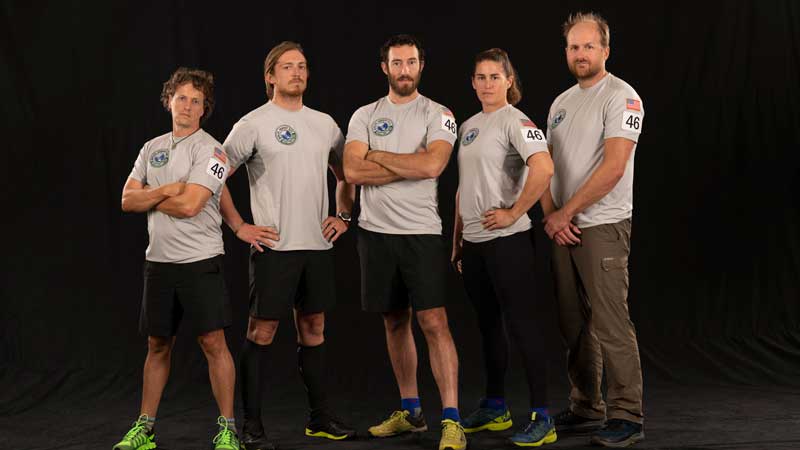 Team captain Magness, who is 44 with a shock of curly hair, is no newcomer to the sport. He began adventure racing after watching the original Eco Challenge and got hooked on the physical and mental endurance, the unknowns and the teamwork needed to move toward a goal through gorgeous landscapes, efficiently. Magness met Staudigel while Magness was a high school physics teacher in San Diego, and the two would go on runs during lunch period to practice eating while moving. Eventually, Magness and his wife, Chelsea, who is also an elite adventure racer, moved to Bend’s Old Farm District so they could train year-round. Staudigel soon followed suit. “It worked pretty darn well,” Magness said, adding they’ve ranked as high as 7th on the world circuit.

Staudigel and the Magnesses form the core of Team Bend Racing, or Team Yogaslackers, as they’re often called, and when they’re not training or organizing their own races around Oregon, you can find them teaching yoga and acrobatics internationally or at Tula Movement Arts in NorthWest Crossing. When applications opened for the Eco Challenge, the team was almost a shoo-in given their competitive chops. Amazon gave each of the sixty-six teams selected $50,000 to get to Fiji and do the race. The winner would get $100,000. “You’d think there would be cameramen in your face asking you to go back and say something again, but that wasn’t the case at all,” Magness said. “When the race started, it was a race—an incredibly well-run race.”

The Eco Challenge is the latest mega-million-dollar gamble by legendary producer Mark Burnett, a former racer himself, who produced the original Eco Challenge before other hits like Survivor and The Apprentice. As with many of his shows, it’s the stories and backstories of perseverance that give the Eco Challenge its universal viewing appeal. Magness once had to be carried out of a 600-mile-long adventure race in Patagonia with a destroyed hip, which he had fixed through an experimental procedure in India. Not long after, he and Chelsea lost one of their unborn twins, a beautiful still-born boy they named Spirit B. Broken but not beaten, the team returned to Patagonia the next year to win that race, during which time Chelsea revealed she was pregnant again. Their youngest son, Revel Wilder, was born just three weeks before the Eco Challenge began, so Coombes subbed for Chelsea. 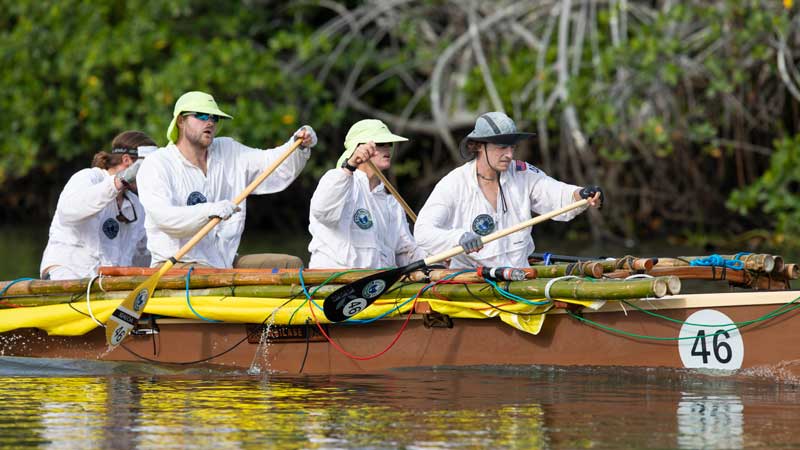 Team Bend Racing paddles a jungle stream at the start of the race.

Back in Fiji, things go south for Bend Racing fast. On assignment for Outside magazine, I watched as they maintained the lead paddling to a remote island. I met them again a few hours later on another island, Ovalau, where they marched off on a steamy jungle hike. There the team runs into trouble and suffers for days until Grylls gives them a pep talk that keeps them in the game. “He’s actually a really great guy,” Staudigel said.

Nearly a year after filming, back at my home in midtown, I met some of the team for a sneak peek viewing party of the first few episodes that Amazon sent me. We talked about what happened in the jungle that day, and what happens next. No one can say much. We all signed non-disclosure agreements, but the show is also fun and addicting, if not a bit hokey in spots, and I want no spoilers.

Even so, Magness offered some clues to how the series will unfold: “I think you’ll be seeing more of us.”

World’s Toughest Race: Eco-Challenge Fiji released with 10 episodes August 14 on Amazon Prime. Watch to see how the Bend team fared and who took home the prize!

Share This Article
« Bend’s Kathleen Geary named regional Master Gardener of the Year
Newberry is a Volcanic Treasure so Massive, You Might Be on Top of it Right Now »