You are here: Home / Home / How to Add a Water Feature to Your Landscaping

The do’s and dont’s of adding a water feature to your home landscaping in the high desert. 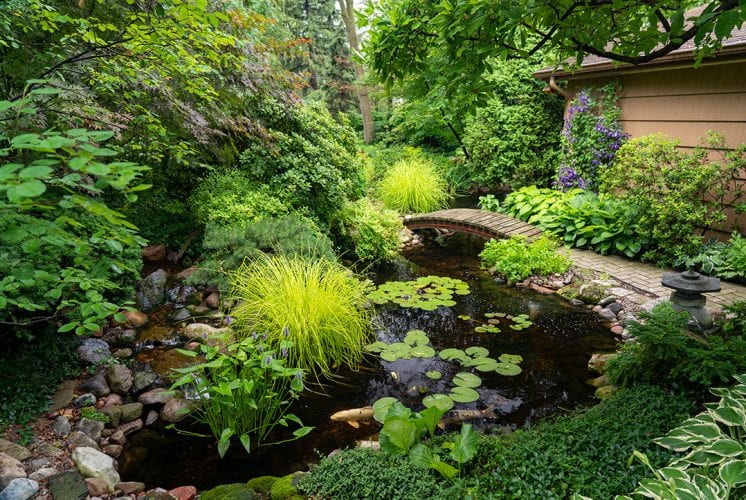 Tucked into a backyard corner in an established northeast Bend neighborhood sits an oasis in the Central Oregon high desert. A slight waterfall cascades down a terrace of stacked slate into a small catchment from where the water recirculates up through the stone and back down again.

Blocking out sounds from passing cars and the chatter from neighbors, the waterfall was built by homeowner and experienced DIY-er Al Beekman. Beekman used slate given to him by a neighbor, a circulating water pump purchased at a Tumalo Community School auction and other materials.

Throughout Central Oregon you can find similar sanctuaries that can range in size and complexity, from a pond large enough for swimming to a single jar-style fountain. All provide respite from the high desert heat, relief from the sun’s glare, the soothing sound of flowing water and a haven for people, pets and wildlife. 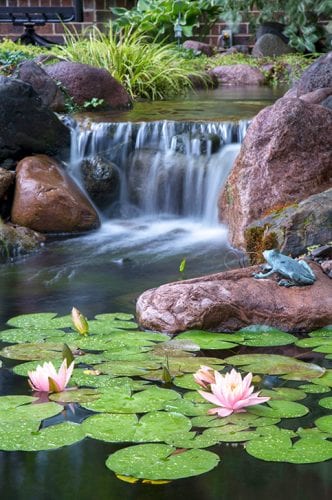 While many of these projects share similar construction steps, they are usually only built by veteran DIY-ers or landscape professionals.

“If you’re going to build a pond—with or without a waterfall—you probably should get help,” advised Shannon Lester, who with her husband owns Blooming Desert, a landscaping design and build firm based in Powell Butte. “It isn’t just the cost of materials. There’s also the cost of repairs if things go wrong or if installation is incorrect,” added Suzanne Day Audette, a landscape architect and contractor who has been called in to redesign and replace leaky water features.

Almost every project starts with a shovel, and excavation can be particularly tricky here given the shallow layer of lava rock beneath the topsoil. Once the site is prepped, a layer of sand is added, followed by a pond liner. For smaller projects, premade pond forms can be used in place of the sand and liner. Some designs call for a fountain while others require the use of a pump and hose to circulate the water to the top of a waterfall. Both require electrical connections.

“You want to be careful whenever you’re working with electricity and water. And you also don’t want standing water,” said Audette. “You need the water to move quickly enough so that you have the sound, and you don’t also have a breeding area for mosquitoes or flies.”

Once the pond is built, plantings should be added to obscure the construction edges and to integrate the area with the rest of the landscape. Both designers agree that homeowners should consider several factors when adding a water feature. These include any homeowner association regulations, the location’s exposure to sun or shade, maintenance time (the larger the feature, the more the work), measures to combat evaporation, smart technology, safety for family members and pets, and the wildlife that the homeowners may, or may not, want to attract. A final important factor is schedule. According to Audette, the smartest planners make arrangements in the fall or early winter for the next spring or summer’s installation.

Pondless waterfalls, where water cascades down a boulder or series of rocks, through a gravel or stone bed and then recirculates to flow again, are becoming increasing popular. Lester and Audette recommend them rather than a pond in homes with children or pets or for those homeowners who want to encourage the local bird, bee and butterfly populations rather than deer or elk. 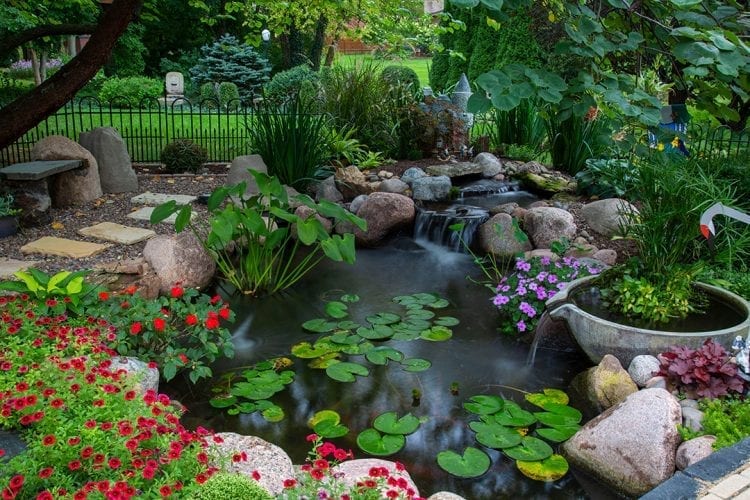 If you want immediate gratification, however, the shortest route to a water feature can be found at local garden centers, such as Landsystems Nursery or Tumalo Garden Market, which are only two of the many local outlets that sell fountains that are ready to plug and play. Fountains range in size and style from tiered concrete composite arrangements that would rival Rome’s Trevi Fountain to sleek ceramic jars to a small boulder outfitted with a bubbler.

There is a suitable design for every Central Oregon home. For Beekman, the water feature adds an extra level of enjoyment to his family’s backyard.

“The waterfall faces the house and the sound can also be heard inside,” he said. “It really drowns out the city noise and is just such a soothing sound.”

Share This Article
« Do You Have What It Takes For The Hammer Fest?
LGPA Golf Pro Finds A Home At Tetherow Golf Club »