You are here: Home / Business / We Can Work It Out

An explosion of coworking spaces has created a wealth of options for Bend’s flexible workforce. Before coworking became the coolest thing to do in Bend since opening a craft brewery, it had to go through another stage where it wasn’t so glamorous. And it wasn’t so long ago. 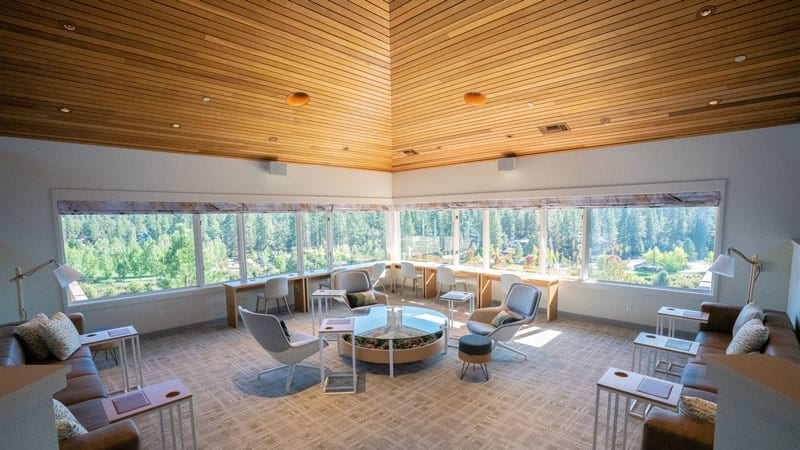 Kelly Kearsley, a freelance writer and start-up cheerleader, was one of the early adopters. She and her husband, Justin, who was developing a start-up company, joined up with a group of software engineers who had rented office space off Greenwood Avenue.

“It wasn’t ‘cool’,” she laughs. “I mean, it was like a closet, and there were cubicles… But it was rad, because, back then, Bend was just dipping a toe into the tech industry, and this was a space where a lot of people were having meetups.”

Software engineer James Gentes was the ad hoc organizer of the group, buying pizza, and managing the space in his free time.

“It kind of grew organically. And we all shared one big lease and figured it out,” Kearsley said. Within a few short years the group had a new home on Emkay Drive and had adopted a non-profit model to foster the remote work and start-up culture emerging in Bend.

“We started thinking we could create a much bigger coworking community,” said Kearsley, who now serves as BendTECH’s board chair.

They didn’t know how right they were. 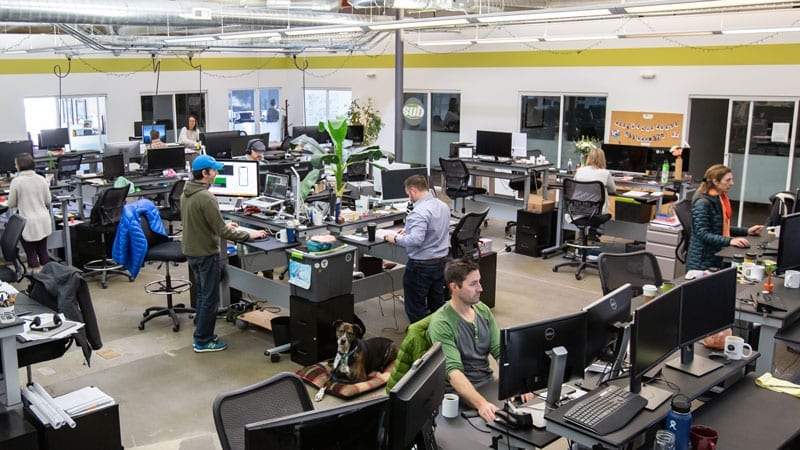 Fast forward to 2019, when at least three new coworking spaces opened in Bend, two of them just a few blocks apart in the NorthWest Crossing neighborhood. Another was set to debut before the end of the year inside the SCP Redmond Hotel in downtown Redmond.

By a way of a loose count, the combined capacity of Bend’s coworking spaces sits at about sixty-seven private offices (some of which can accommodate multiple workers), 140 dedicated desks, and roughly 300 “flex memberships,” which allow members to drop in as needed.

At full capacity, that’s a workforce of more than 500 individuals. If it were a business, it would rank among the Bend’s top 10 private employers, bigger than Les Schwab and Deschutes Brewery in terms of personnel.

This trend isn’t surprising to Damon Runberg, Regional Economist for the Oregon Employment Department. “Bend is bringing in [remote] workers and small business owners who value our slower pace, high quality of life, and relative affordability,”  he explains.

But what many of these “remote workers” discover, after working from their home office—or kitchen table—for a few months, is that working from home day after day isn’t always the dream gig it’s made out to be.

“Working from home sounds great, especially when you moved to Bend and you’re excited about being able to take that conference call in your yoga pants, and you can make that ‘slipper commute’ and not have to drive anywhere,” says Carrie Douglass, co-founder of The Haven coworking space on Bend’s near west side, off Colorado Avenue. “But six months into it, you’re thinking, ‘My toddler’s bothering me or walking in on conference calls,’ or ‘My dog’s barking when the truck drives by.’ After craving that flexibility, now you’re realizing that working from home every day might not be all that great.”

It’s for this reason that Douglass and her husband, Scott, founded The Haven. Beautifully designed and decorated to replicate a “residential feel,” with huge windows and sweeping views of the Deschutes River below, The Haven’s members are a mix of remote workers—part of a larger company’s distributed workforce—and self-employed professionals or freelancers, a breakdown that reflects both corporate America’s embrace of remote work and the rise of the entrepreneurial “gig economy.”

“I think companies have figured out that, as the workforce has changed, employees want more flexibility,” said Douglass. “Part of that includes being able to work remotely, and technology has allowed for that to happen.”

The Haven offers multiple “membership types,” from private offices starting at $875 a month, to dedicated desks in an open office setting for $449 a month, to multiple types of flex memberships, and even “day passes” for $40 each. Each of Bend’s coworking spaces operates using a similar membership system.

The Collective NWX, for example, deliberately features a selection of different workspaces that cater to different professional needs and budgets.

“We know that some people love to work in their house, but they just need a few hours to get out of their jammies and socialize with other people. So, we built a community drop-in space where you can come work for a couple of hours or meet a client in a location that’s not a Starbucks,” said Sara Odendahl, Owner and Managing Partner. “We also know some people might not want to work at home but don’t have a physical office elsewhere, so we created six private offices and twelve dedicated desks where members can work every single day.” 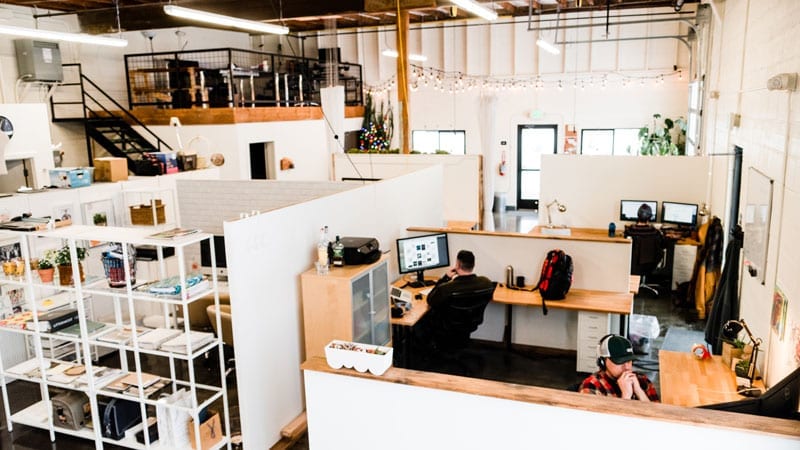 Avoiding distraction isn’t the only challenge facing remote workers trying to make a go of it at home. Remote work can also be isolating.

“People are yearning for connection,” said Will Blount, president of dog outdoor accessory company Ruffwear and founder of another new coworking space in town, Embark.

He thinks this innate desire is one of the biggest drivers of the coworking boom. “Technology has allowed us to work from anywhere, and it’s allowed us to be connected with people anywhere. But at the same time, I think we’re really feeling disconnected. To physically sit in a room with someone and get to look at them, that’s something that you can’t experience over Skype or some other digital tool. There’s a real sense of communication that happens in the presence of other humans. And I think that our society is deeply yearning for that experience.”

Amanda Krantz, the executive director of BendTECH, said that the shared desire for community that leads professionals to become coworkers also sometimes leads to unexpected professional collaborations and partnerships.

“Many of our members initially just want a sense of community, a place where everybody else is also working,” she agrees. “But even if they didn’t come here trying to network, we’ve seen a lot of members meet people or find likeminded groups, and they go off and start companies together or hire someone away from what they were doing.”

Kelly Thiel, cofounder of The Wilds, a coworking space focused on creative professionals, said that the managers of Bend’s coworking spaces collaborate to help new members find the ideal space for their work.

“Each of Bend’s coworking spaces has its own flavor, so there’s a space for everyone,” she says. “Our flavor is more creative. The Haven has a certain flavor, and Embark and BendTECH each have their own feel.”

In the case of Embark, the coworking concept evolved from what used to be Ruffwear’s product warehouse in Bend’s NorthWest Crossing neighborhood. Though it welcomes members from numerous different types of businesses, its focus is in on the outdoor industry.

“What we’re creating here is a container where people who share a common goal can come together and learn and grow from each other,” says Blount. “We designed the place specifically to create these intersections where people from different backgrounds and companies are going to run into each other and spark a conversation about their passions. And, hopefully, a rising tide lifts all ships.”

More than an office

There may be a secondary benefit to a strong coworking culture in Bend, said The Haven’s Scott Douglass. Coworking has the chance to engage people not just creatively, but also civically.

“When you look over history, people tend to be connected to their community through their children’s school, their church and their place of work. Well, fewer and fewer people go to church, you’re only connected to a school if you have a school-aged kids, and now we’ve got this huge segment of 12 or 13 percent of people in Bend who aren’t connected to a local place-based employer. So how are people growing roots in a community and finding out how to be connected, finding out about volunteer opportunities and civic opportunities?”

Douglass said coworking spaces like the Haven can help fill that void by providing an environment where members of a disparate workforce can help each other connect to the community at large and promote civic engagement, like volunteering.

“If you’re at home Monday through Friday, head down, working by yourself, and then on evenings and weekends you’re accessing all of the wonderful resources we have in Bend—the river, the trails, the mountains—you’re really not fully participating in the broader community. And that doesn’t bode well when it comes to a city maintaining that sense of place,” he said.

Bend is a great community not just because of the proximity of the mountains or the urban trails, but rather because generations of citizens have invested their time and talents into building our parks, our schools and our social infrastructure.

“As our city grows, and as more and more talented people move to Bend, it’s important to ensure that their talents are contributing to our community overall,” Douglass said.