You are here: Home / Culture / A Century of Sailing at the Elk Lake Yacht Club

Elk Lake Sailing Club is gone, but its legacy endures on the eve of a 100-year anniversary. 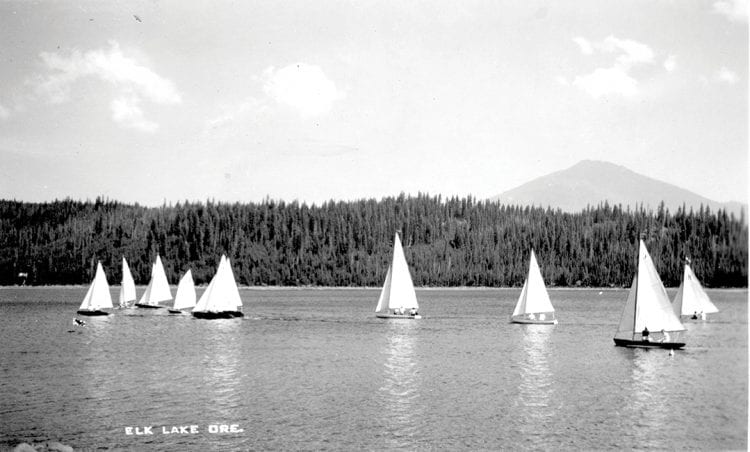 With the wave of a flag, the twelve sailboats were off. The flatties picked up speed as the mountain winds came rushing down from Mount Bachelor. Searching for the best angle of attack, Ray Peoples steered his sixteen-foot Typhoon toward the buoy on the other side of Elk Lake. The first annual Elk Lake regatta of 1938 was off to a good start.

Peoples is synonymous with sailing on Elk Lake. Born in Chicago in July 1890 to missionary parents, Peoples was brought up in Siam (nowadays, Thailand). At the age of nine, he developed a life-threatening case of malaria, and was sent back to the U.S.

Taken in by foster parents in Minnesota, his adoptive family was part of the Shevlin, Carpenter, Clarke Lumber Company. The family had a house in Minneapolis and a summer home on Lake Minnetonka, a sprawling lake west of the Twin Cities. “My dad was into sailing long before he came to Bend,” said People’s oldest son, Phil, in a 2009 interview. Ray Peoples sailed on a thirty-two-foot, eight-man crewed “Inland Scow” on Lake Minnetonka and won several regattas hosted by the Inland Sailing Association.

In 1919, Peoples was sent to Bend to learn the lumber trade working for Shevlin-Hixon Lumber Company. He rented a room with the Mahoney family on Delaware Avenue. “He had sailing in his blood when he arrived in Bend,” said Phil Peoples. “The first thing he did was to build a boat in Mahoney’s basement.” The sixteen-foot, a flat-bottomed sailboat was the first to be launched at Elk Lake, the second largest of the natural lakes along Cascade Lakes Highway. Framed by the Cascade mountains, Elk Lake was already a destination for early Bend residents and growing more popular with the completion of Elk Lake Lodge that Allen Wilcoxen broke ground on in 1920. The same year, officials from the Deschutes National Forest staked out thirty-some lots around the lake. The idea was to lease them for a nominal rate so families and local organizations could build summer homes on the lots.

Eventually promoted to supervisor of Shevlin-Hixon’s box factory, Ray and his friend Paul Hosmer, editor of the Brooks-Scanlon newsletter, rented a cabin at Elk Lake. Peoples founded the Elk Lake Yacht Club in 1925. The annual membership fee was $2. “Nobody enjoyed himself more on a sailboat than Ray,” said Hosmer’s son, author Jim Hosmer, in his book Random Recollections of the Elk Lake Yacht Club. “He was always eager to teach and encourage others by giving patient, friendly advice, instruction and encouragement in the finer points of reading winds and trimming sails.” 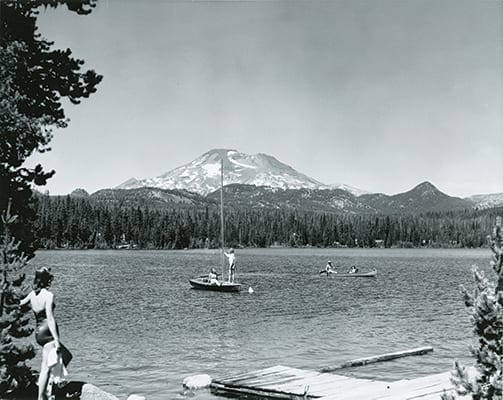 Saturdays were work days at the mills, so Sunday sailing became a staple at Elk Lake. The sailing season stretched from early June through Labor Day. Perhaps sensing a better economic climate after the worst of the Great Depression had passed, the members of the yacht club instituted the Elk Lake Regatta. The first regatta took place on Sunday, August 28, 1938.

Typical for the annual regatta, the festivities ended with a banquet at the Elk Lake Lodge with Paul Hosmer as toastmaster. Mostly for fun, yacht club members invented the “Rainbow Special,” a drink made from equal parts bourbon and Elk Lake water. The “Special” was said to taste like a drunken rainbow trout, and the winner of the regatta had to down one.

The annual regattas went on from 1938 until 1942. The following year, the event was cancelled due to war restrictions. After the war, sailing returned to Elk Lake.

Orthopedic surgeon Bill Guyer joined the party when he bought a cabin at Elk Lake in 1959. “The cabin came with a twelve-foot long snipe,” said Guyer. Naturally, Guyer decided to learn how to sail. Several of the other cabin owners acted as mentors, among them was Peoples. Guyer’s friend Chuck Cleveland eventually moved to Bend and started North Pacific Products Company on Century Drive, making toy balsawood gliders. “We decided to use the back end of his factory to build two Geary 18 (boats), one for each of us,” said Guyer. 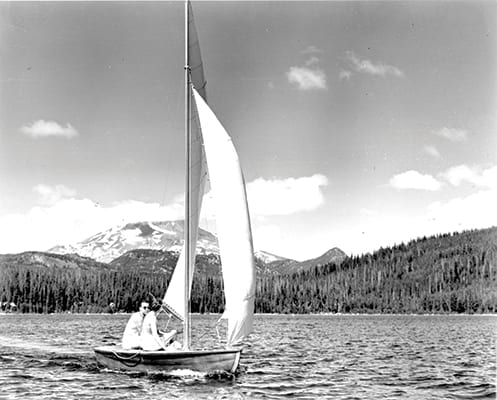 Randall Barna was a pioneering windsurfer in Oregon in the 1980s. He discovered the sailing races at Elk Lake and became hooked. He bought a Geary 18 and sailed in the Sunday races. There was strong camaraderie amongst the sailboat owners on Elk Lake, according to Barna. But that did not mean a squat when a blast from the airhorn started the race. “It is like any other competition—you can be best friends, but once you’re on the starting line, I’m out to beat you,” said Barna. “It was serious, good competition.”

Almost fifty-five years after the founding of the yacht club, sailing fizzled out on Elk Lake. Windsurfing became the next big thing. Eventually, windsurfing races at the lake went the same way as the sailing races, and there was not enough interest to continue. The resort remained, and now a new generation of sailors has returned to Elk Lake, riding the wind.

As the 100-year anniversary of the first sailboat launch at Elk Lake is nearing, Bend custom homebuilder, Greg Welch is planning an Elk Lake regatta at the end of July this year. He is a part owner of Ray Peoples’ cabin at Elk Lake. “We want to celebrate Ray, sailing and Elk Lake,” said Welch.