You are here: Home / Adventure / The AdvenChair is Designed to Go Out of Bounds

The AdvenChair, created by Geoff Babb and Dale Neubaurer, is an all-terrain wheelchair designed to go off-road. 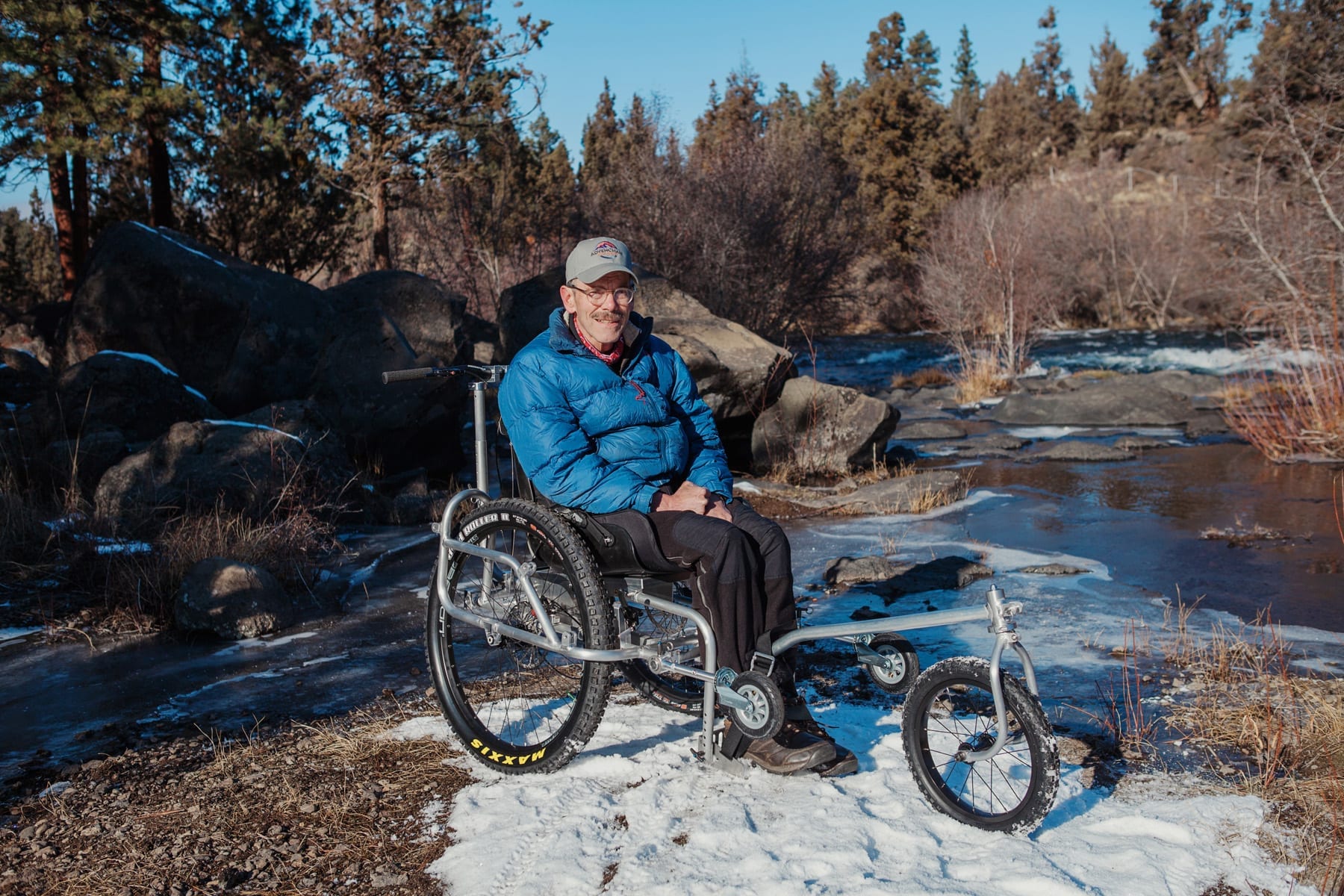 In September 2016, almost eleven years after suffering a near-fatal brain-stem stroke, Geoff Babb sat in his modified wheelchair at the Bright Angel trailhead with his family and a group of friends. Given the path that he had traveled to reach that point, a wheelchair journey into the belly of the Grand Canyon didn’t seem far-fetched.

An avid backpacker, climber and mountain biker before his lifechanging stroke, Babb wasn’t content to surrender his outdoor lifestyle because of his limited mobility. Determined to get back into the wild places that inspired him, he soon realized that his enjoyment of the outdoors with friends was limited not so much by his legs, but the frailties of his wheelchair.

“Normal wheelchairs just can’t cut it in the wilderness,” said Babb. “To get off the beaten path, I needed something that was much more durable and versatile than anything out there. That’s how the AdvenChair was born.”

Babb, a fire ecologist for the BLM, began developing the all-terrain AdvenChair several years ago with the help of Dale Neubauer, a friend and helicopter mechanic. Together they created a human-powered vehicle with mountain bike tires, a detachable front wheel, a rear handle bar with dual disc brakes, and a harness that would allow a team of up to four people to push, pull and guide Babb up and down rugged trails, as well as over sand and snow.

“What drove me to work with Geoff was his incredible perseverance, optimism and positive drive,” said Neubauer. “When you spend time around someone like that, the last thing you’d want to do is hold him back.”

Initially, Babb’s stroke therapy included sit-skiing with Oregon Adaptive Sports and visits to Healing Reins Therapeutic Riding Center, which gave him the idea to trek with friends into the Grand Canyon via pack mule. But when the wait for a permit and other logistics got in the way of a trip in September of 2016, he decided to put his AdvenChair to the test instead.

Despite surviving rugged trails at Mount Bachelor and Smith Rock State Park, as well as at Mount Rainier, Crater Lake and Glacier national parks, the AdvenChair ultimately succumbed to a broken axle sheath two miles down the Bright Angel Trail. “The pounding of the wheels over dozens of water bars was just too much,” explained Babb.

The break sent Babb and his team back to the drawing board to strengthen the AdvenChair. 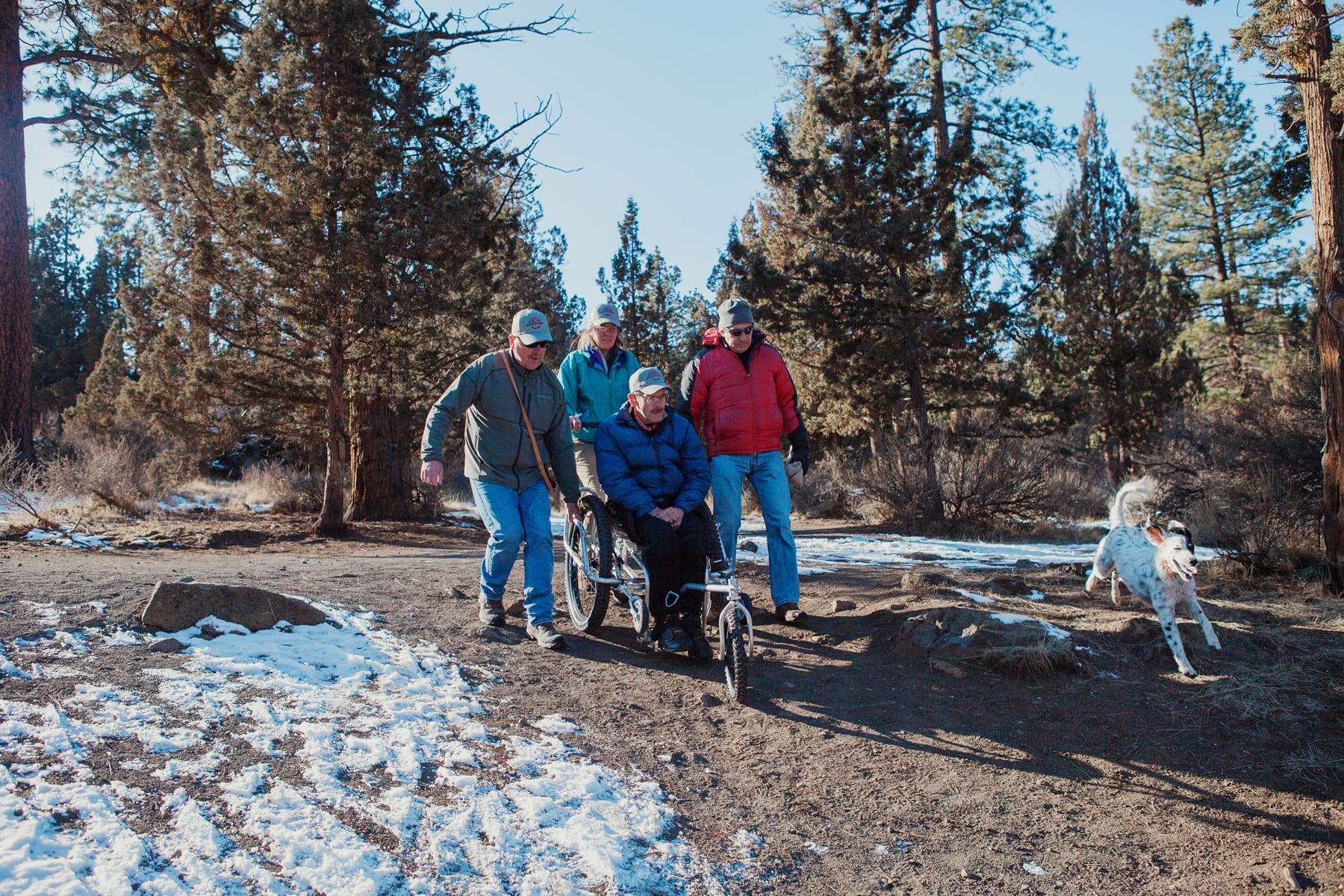 “The structural failure of the axle assembly allowed us to start with a clean slate,” said Neubauer. “Geoff came up with the idea of blending the attributes of a sit-ski with high-grade aluminum mountain bike components, including beefier twenty-seven-and-a-half inch wheels, that led us to an entirely new hybrid design.”

After receiving encouragement at Bend’s Venture Out Conference in October of 2017, Babb was preparing an IndieGoGo campaign to help produce prototypes of Version 2.0, when he encountered a significant bump in the road. On November 10, 2017, he had a second stroke—twelve years to the day after his first one.

“The chances of surviving a brain-stem stroke are about 10 percent,” said Geoff’s wife Yvonne. “I knew getting him back from another one at age 60 would be pretty miraculous. But he looked at me from his hospital bed the next day and confidently murmured, ‘Not our first rodeo’.”

Despite doctor’s predictions, Babb relearned how to swallow and eat solid food all over again, and emerged more determined than ever to bring the AdvenChair 2.0 to reality, not just for himself, but for the nearly 15 million people nationwide suffering from limited mobility, and highly limiting wheelchairs.

Oregon Adaptive Sports Executive Director, Pat Addabbo, sees tremendous potential on a global scale. “As a program provider, the things I look for are adjustability for different sizes and abilities of people, ease of assistance by staff/volunteers and durability,” he says. “The AdvenChair fits all of these. It will surely fill a need in the adaptive recreation industry.”

Babb’s fellow Oregon Adaptive Sports skier Kirk Petersen, who is paralyzed from the waist down, is anxious to test the new chair.

“The chair is going to do wonders for getting people like myself to remote places,” said Petersen. “We don’t want to be stuck in the house watching TV. We want to be doing the same things everyone else wants to be doing outside. We just need a little help.”

Perhaps not surprisingly, Babb chose November 10, 2018 as the day to launch his fundraising campaign to help build and test several prototypes. With funding through his website, his goal is to begin selling chairs in 2019, and ultimately, to see them in use throughout the country, so people can share their stories online.

“Having access to nature and solitude does wonders for the mind and body,” said Babb. “Whether venturing to the bottom of the Grand Canyon or not, we hope to provide some very rewarding journeys.”