You are here: Home / Adventure / Where to Run Around Bend This Winter

Local running experts Lauren Fleshman and Lucas Alberg share the best routes and trails for running around Bend this winter. 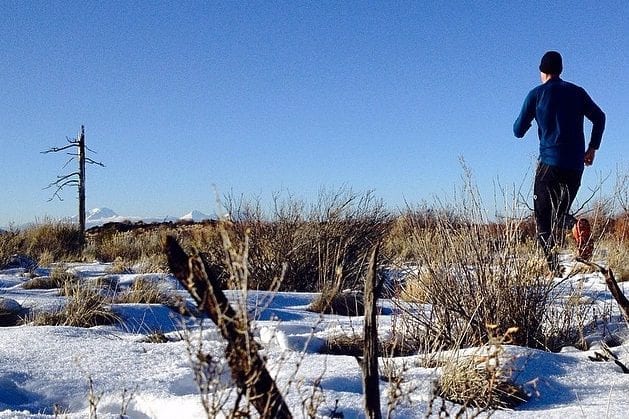 Lucas Alberg running in the winter at Horse Butte near Bend.

Bend is known for its abundance of running trails that are popular in the spring, summer and fall. But in the winter with snow on the ground, there are fewer trails from which to choose. We turned to local running experts Lauren Fleshman and Lucas Alberg to share some of their winter running routes around Bend. The takeaways: If you plan on running this winter, you’ll want a pair of Yaktrax. Or go east.

From Columbia Park in Bend, head through the neighborhoods toward 17th Street. Most of the streets are quiet and groomed. Then cut over to Galveston Ave., where you pick up the groomed path that follows Galveston Ave./Skyliner west. Turn left on Skyline Ranch Road, left on Metolius and then left again on Mount Washington to take you back to Skyliner. She said the paths are usually groomed enough to run with Yaktrax on. “Basically, if you can find low traffic roads that are plowed, and run during low traffic times, it is very pleasant,” said Fleshman. The whole route is about eight miles and gets you off of some of the busier roads in town.

Fleshman said that she also likes to run loops in the Old Mill District. From Farewell Bend Park, this stretch of the Deschutes River Trail is mostly paved. Three bridges that cross the river mean you can make the loops as short as a mile or as long at three miles. Fleshman recommends bringing Yaktrax, clamps that attach to the bottom of your shoes, to use if the trail has some snow on it.

“I really like the Badlands because of the solitude and the beauty,” said Alberg. The region is relatively flat, with wide and sandy paths. The Flatiron Trailhead is sixteen miles east of Bend, and the whole trail is around six miles, but there are lots of connecting loops for you to choose how long you want to run. “It’s somewhere that you’d never want to run during summer with the heat and sand, but come winter the sand packs hard, there’s not a soul in site, and there’s a perfect stillness and beauty that can’t be matched,” said Alberg.

Also east of Bend, the Horse Butte area is popular with mountain bikers and runners. “I also enjoy Horse Butte, especially in early winter as you still get some of the color from the sagebrush turning,” said Alberg. The whole loop is ten miles long with one steep section of switchbacks. “Combined with the red lava rock of Horse Butte, it makes for a spectacular combo,” said Alberg.

Share This Article
« 6 Things to do Around Bend This Weekend
Leather and Lace: Experience Central Oregon’s Ice Skating Rinks »