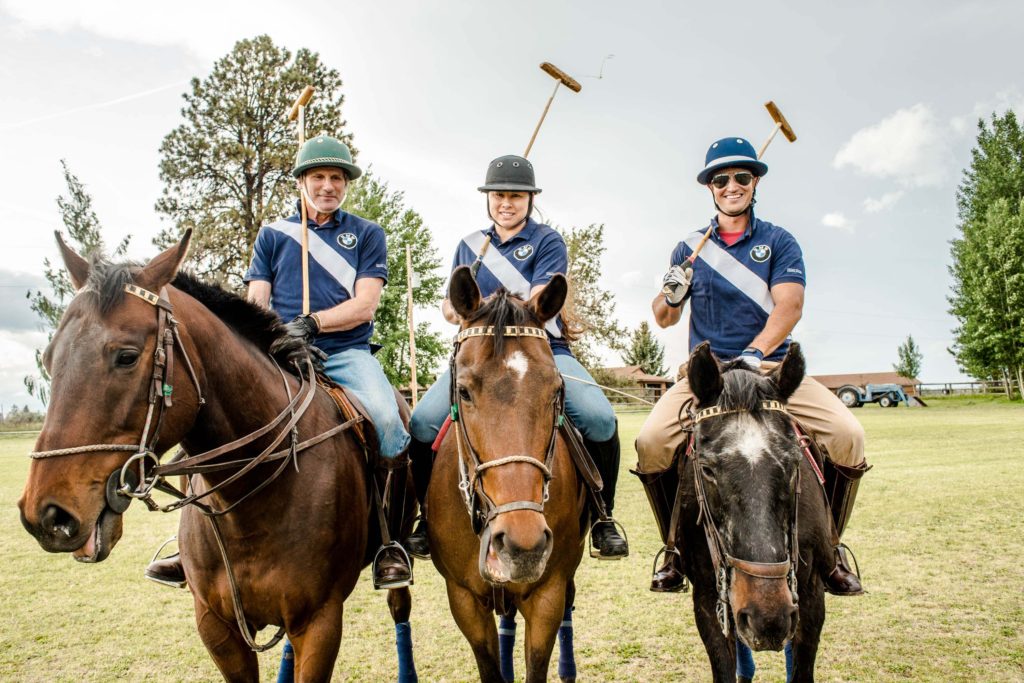 Sitting inside the barn at Some Day Farm in Tumalo, the Cascade Polo Club started their season with a team meeting around a ping-pong table. Tiny posts set on metal washers marked the goals, as Daniel Harrison moved wooden blocks around a white marble, going over the rules of the game with his team before they saddled up. One of only three polo teams in Oregon, Cascade Polo Club aims to introduce the sport of kings to both riders and spectators in Central Oregon.

“Polo is a rare bird in these parts, but it’s a good fit,” said Harrison. “There are a ton of horses out here and a ton of horse people who want to learn—it’s a nice thing to pass on.”

Harrison first started riding as a hunter-jumper, but says as soon as he swung a mallet, he was hooked. He began playing professionally in the 1970s and has competed for the U.S. in ten different countries. In 1975, his team at the University of California, Davis won the National Intercollegiate Polo Championship, bringing the tournament’s prestigious trophy to the West Coast for the first time. This launched a streak of wins in seven out of the ten years that followed.

In 1981, just out of veterinary school, Harrison moved to Bend to set up a practice in a town that fulfilled his three needs: a trout stream, a ski mountain and a place for a polo field. He eventually founded the Cascade Polo Club in 1996 and began an instruction program to teach local riders the game, he said, was, “too good to quit and too good not to share.”

“It’s the most fun you can have on the back of a horse,” he said. “There’s no arena, no boundaries—it’s a unique riding experience that appeals to horse people, [like] a chess game played at a gallop.”

Saddled up on Harrison’s six polo-trained ponies, the team’s weekly practices consist of clacking mallets and lots of laughter from both experienced players and newcomers to the sport. Kelsey Kelly played polo during college for Colorado State University and said she fell in love with the sport because of the people.

“I started to try out for the equestrian team but they were kind of ‘tight-bunned,‘ if you know what I mean,” she said. “Then I saw these people ponying horses with a beer in their hand and I thought ‘who are those people?’ The personality in polo is really laid back; the camaraderie is awesome.”

“I’m still catching on,” she said of the sport after the team’s chalk talk. “The rules are so intricate, but you just have to get out and ride.”

Calling in professional players from all over the Northwest, the club participates in four tournaments a year, as well as multiple dual meets. Hosted on Harrison’s practice-sized (but pristinely green) polo field at the farm, home matches bring in hundreds of spectators from the community, with half of the ten-dollar entry fee benefitting a local nonprofit. Sponsored by Central Oregon businesses, games have been known to bring in crowds of up to 450 people and have supported more than twenty local nonprofits over the years, including animal shelters and a horse rescue.

With complicated rules (sides change after each score) and lingo such as “bumps” and “chukkers,” the game can be confusing to watch, but also thrilling. Harrison describes games as family events, picnic-style, with more people wearing Carharts and t-shirts than fancy hats.

“The mystique is attached to the upper class, but this isn’t the queen’s polo,” said Harrison.

For a photo gallery of the Cascade Polo Club, click here.