You are here: Home / Business / Gary Fish: Master of Craft

Joe Lakowski sipped a dark beer and chatted with his fiancé, Susan, at the Deschutes Brewery Public House. The din of the tavern made chatting a louder undertaking in recent more crowded years. “I love the Black Butte Porter,” said the 32-year-old electrician from Chicago. “I went to Deschutes’ Street Pub this summer in Chicago, and I had to come out to Bend to see it for myself,” he said. “It’s better than I imagined.”

Before 1988 and the dawn of craft beer in Central Oregon, craft beer drinkers would have had only a couple of choices of mass-produced beers in what has become a booming incubator of brewing. When Deschutes Brewery opened in 1988, times—and tastes—were changing. 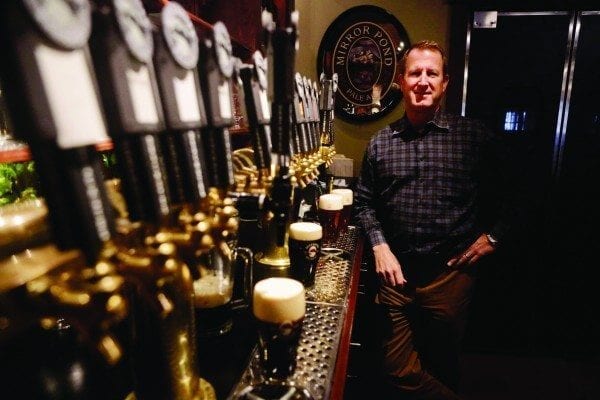 Gary Fish, Deschutes Brewery’s founder, is a young 59 with a businessman’s head on his shoulders and a knack for spotting trends. He and his wife, Carol, moved from Northern California to Bend in 1987 to open what was supposed to be a modest public house and restaurant serving its own beer.

Deschutes Brewery became all that and more.

Deschutes is now the largest-selling American beer in British Columbia and Alberta, Canada, and is the seventh- or eighth-largest brewery in the nation by sales volume—Fish isn’t sure and doesn’t really care. As Deschutes enters its twenty-eighth year, Fish is entertaining offers from hundreds of East Coast cities eager to have a Deschutes outpost in their community.

Fish grew up in Northern California where his father was a wine grape grower in the 1970s, although both his mother and father were native Oregonians. Fish had been in the restaurant business for years, working his way up from dishwasher to part owner of a Salt Lake City restaurant. In the early ’80s, Fish sold his share of that restaurant and moved back to California to help open a brewpub. He and his wife had been looking for a place to relocate when his parents came through Bend after a high school reunion in Corvallis and returned with favorable opinions about the community. “We came up and took a look at Bend, and things fell together pretty quickly after that,” said Fish.

The wine and local food renaissance in California in the early ’70s informed what the Fishes believed was happening to beer in the mid-’80s. A handful of other Northwest breweries—Portland’s McMenamins, Widmer Brothers, BridgePort and Portland Brewing; Hood River’s Full Sail; Rogue in Ashland and Newport and Corvallis’ Oregon Trail Brewery—had opened in that era. When Deschutes opened in June of 1988, Bend was still a raffish mill town of 15,000 people coming out of a massive recession that many would say rivals the recent downturn. 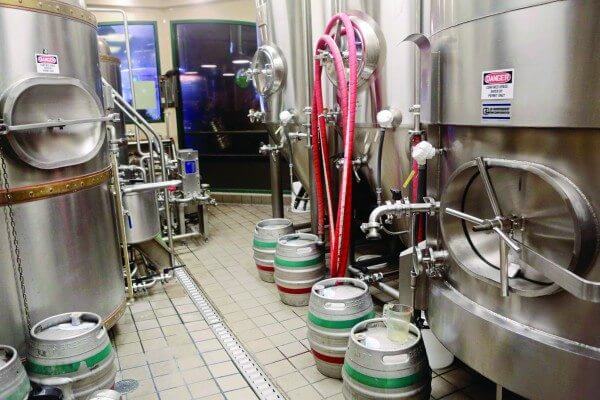 “Craft beer wasn’t known then,” recalled Fish. “There were no breweries in town, and there were maybe a couple bars that served ‘microbrewery beer,’ as it was called then—‘craft beer’ was a term years in the making. The idea that the consumer would drive for more variety, more intrinsic and perceived quality was, we thought, a pretty solid assumption given what we knew about what had happened to wine and what was starting to happen with coffee and produce in the area where I grew up in California.”

Fish recalls a lot of boarded up storefronts in downtown Bend. As a result of this economic lull, the restaurant wasn’t immediately successful. “It was tough going,” he said. Then some taverns in Portland began pouring Deschutes beer, which kicked off the wholesale side of the business.

“We began to grow,” he said, “and we didn’t really know why or what to make of it. Once the industry took off, we took off with it, and we were just trying to make sure the tide kept rising.” 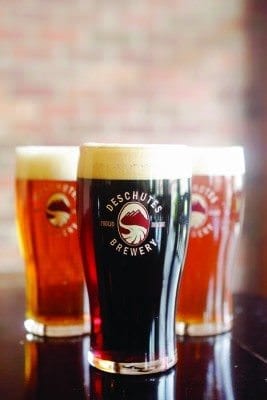 In 1986, the Brewers Association reported 124 breweries across the nation. In 1987, that number was 150. By 1988, there were 199. The paradigm was shifting, led by what Fish called “enterprising entrepreneurs and adventurous consumers.”

“I think every place was ready for it, but Oregon was a little more out front,” he said.

After opening in June of ’88, Deschutes brewed 310 barrels through December. In 2015, it produced some 350,000 barrels. Deschutes beer is on tap or in the beer aisle in twenty-eight states and the District of Columbia. Fish now has about 525 employees spread among the Bend tasting room, the pub, the manufacturing facility and the Portland pub. A team of thirty brewmasters is led by Karl Ockert, Brian Faivre and Veronica Vega, who have decades of experience among them.

While nearly 50 percent of Deschutes’ sales are in Oregon, more people on the East Coast will soon be tipping pints of Bend’s iconic beer. Fish has spent the past two years looking for an East Coast expansion location. He anticipates a decision to be made by the end of 2015, although it may be a while before that decision is publicly announced.

His team of scouts started with 5,000 potential locations and narrowed it down to 110. Needless to say, there’s a great deal of competition for his business. “We’re going to move into a community and spend a lot of money, hire a lot of people and make a big impact on the community,” he said. “That’s an attractive proposition for a lot of these communities, and they want us to know how badly they would like us to pick their community.”

Concepts for the East Coast outpost call for an initial real estate footprint of between 100,000 and 200,000 square feet, with an initial capacity somewhere between 200,000 and 400,000 barrels annually and the ability to grow substantially beyond that. Fish expects that there will be a restaurant attached to it at some point in time, but not necessarily at the outset. The competition for this business is incredibly flattering, he said, but he’s not shopping for kind words and convenience. “What we want is a community where we can develop a meaningful relationship,” he said. “It’s challenging, and there are a lot of really, really cool communities out there to build a brewery in.”

Even as Deschutes continues to diversify its market, it hasn’t lost track of where its home is. “We’re trying to stay local as much as we can, but we know that there are people who live in other parts of the country who want the beer,” Fish said. No matter where the bottles originate, the Oregon-based branding will not change. “That’s very important to us, and it’s our home,” he said. 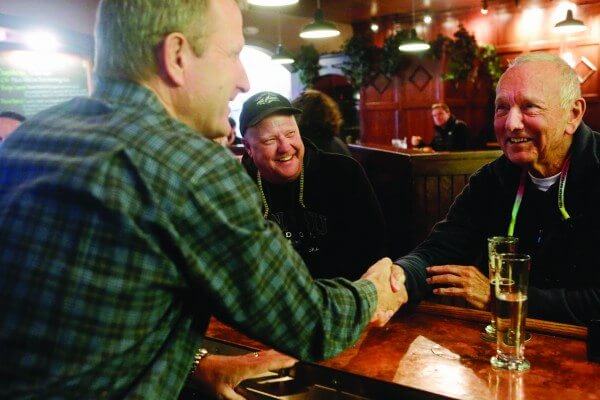 Fish is level-headed and eternally positive when discussing his business plans. The company’s motto is, “Do your best and next time do it better.”

His speaking tones are leveled with confidence and his pace measured. He smiles though, when explaining his involvement in the Bend community. The company has donated one dollar per barrel to local charities since its inception. “Community involvement has been part of our DNA from the very beginning when we wanted the pub to be that European model where it was really the center of community life in small towns,” he explained. “It’s called a ‘public house’ for a reason, and we knew if we were going to be successful we needed to be involved in the community and we have been ever since. This extends to the other communities where we sell beer, and it continues to grow and it’s an important part of what we do.

He laughs when considering the possibility that Deschutes Brewery take the route of 10 Barrel Brewing Co., which was acquired by beer giant Anheuser-Busch InBev. “I honestly don’t think about it,” he said. “We’re not planning to sell. We’re not trying to sell. We’re having fun. We’re moving fast—things are good. If I wanted to sell the company, there are plenty of people who would line up to buy it, but I really have no interest in that.”

Fish conceded that, at some point, he may consider selling, but that time is not now, and when—or if—it does come, he’ll take into consideration all of the things that matter beyond his financial windfall.

Much like the company’s high-end Reserve Series beers that are intended to develop more complexity over time—like a fine bottle of wine, Deschutes Brewery’s path is plotted to evolve and age as well.

According to the Brewers Association, the majority of Americans now live within ten miles of a local brewery. Craft beer has become such a part of everyday life that what’s disappearing, Fish said, is not Bud or Miller Lite, but brand loyalty among craft beer drinkers.

Although things change quickly in this industry, Fish wants customers to consider Deschutes Brewery and think of “trust” when they’re standing in front of the beer cooler selecting what to drink that day. “They know that every one of our beers in any style category is going to be exemplary of that style, and they can trust that that beer is going to taste a way that exceeds their expectations,” he said. “We’ve put so much effort over the years into the idea that what goes into the bottle rather than what goes on the label is what matters to our consumer. That’s something we’re very focused on every single day.”