When Whitney Nye begins a painting, she never knows where her muse will take her. “I don’t start out with an idea,” she said. Instead, she follows the creative impulse wherever it leads her. 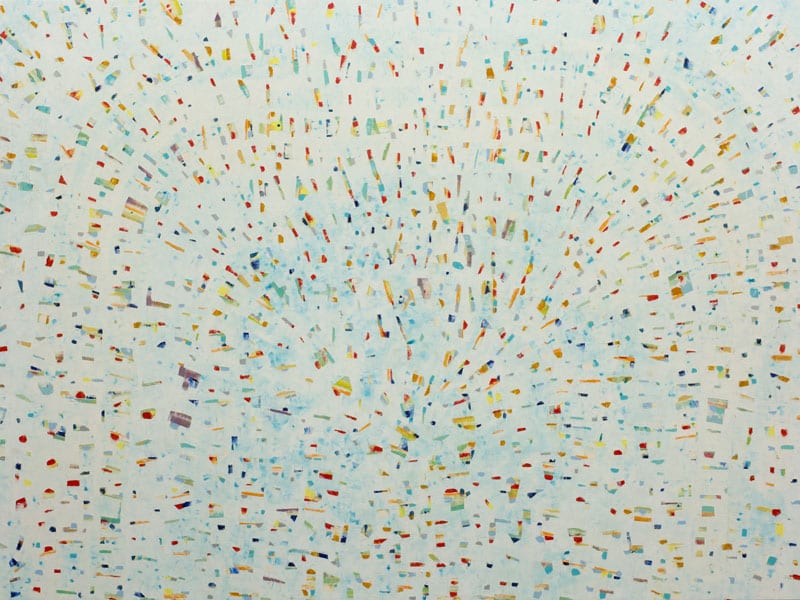 This instinctual style of painting has resulted in a large body of abstract and sometimes rhythmic paintings exhibited in galleries and museums across the United States. Her work is also found in many private and public collections, including the Jordan Schnitzer Museum, Eugene; Vanderbilt Medical Center, Nashville; Swedish Hospital, Seattle; and Oregon Health & Science University, Portland. 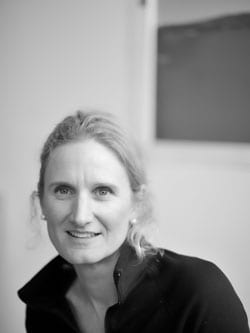 Nye’s mother and maternal grandmother were early DIY adopters, teaching her resourcefulness and fostering the idea that “if you need something, you can make it,” she said. Both women sewed their own and their children’s clothes. Textiles and fabric design was baked into the young Nye’s genes. When she headed to college at the University of Oregon in the 1980s, she “couldn’t stay out of the department’s textile weaving and dying areas,” she recalled.

A textile teacher at UO surprised her with a summer scholarship at Penland School in North Carolina, an international hub for craft education and creativity. After graduation from UO, Nye returned to the Penland School for a two-year fellowship where she could work in any medium. While there, she built a kiln, learned metalworking and woodworking and said she “dabbled in it all.” The experience was formative and she built relationships with other artists, as well as giving her familiarity with numerous materials she’d one day apply to her art.

In 1993, the Oregon College of Art and Craft in Portland offered her a residency, and she was soon working out of studio space in the Pearl District where artists were flocking. Some of her early work included large-scale installation art, sculptures and mixed media pieces incorporating her grandmother’s buttons, sewing patterns and ephemera. But her mother, Juanita Nye, an artist who studied with Portland sculptor Mel Katz, encouraged her daughter to try painting, a medium she had yet to explore.

Martha Lee, owner of Portland’s Russo Lee Gallery which has represented Nye since the early 2000s said, “Whitney has done sculpture and mixed-media-based work but has primarily been painting for the past several years, always with a level of abstraction using pattern and repetition.”

“She’s got an amazing sense of color,” Lee added. “A lot of people respond to her color, and although her work is abstract, there are many references to the natural world. Many of our clients are seasoned gallery goers, and Whitney’s work has something they can grab onto and recognize and put their own experience to.” 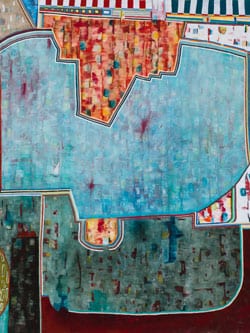 She’s currently participating in a group show, “A New State of Matter,” at the Grand Rapids Art Museum, featuring artists who incorporate glass in their work. She has an upcoming exhibit in August and September at the Newport Visual Arts Center at Nye Beach. She’s curious about whether she’s related to the “Nye” of Nye Beach and will work with the local historical society to find out.

After many years of living and creating art in Portland, Nye returned to Bend in 2018 where she’d spent much of her youth. She has a small studio but her approach to painting almost demands a large space where she can staple as many as five unstretched canvases to the wall or spread them on the floor. “I like to be physical, close up and far away from a piece, using a variety of tools to add or take away textures and layers,” she said.

“When I’m working, I’m in the piece and lose track of time. It’s a reactionary experience. I make a mark and another mark and can get obsessive in the process, and I have to know when to get off the train,” she said, adding that she stays true to what’s interesting to her. “If a painting isn’t authentic, I’ll abandon it.”

Whitney Nye’s work will be on display at Bend Magazine’s offices in March and April, and featured each month in conjunction with downtown’s First Friday Art Walk.