You are here: Home / Culture / The Short History of Pilot Butte Inn 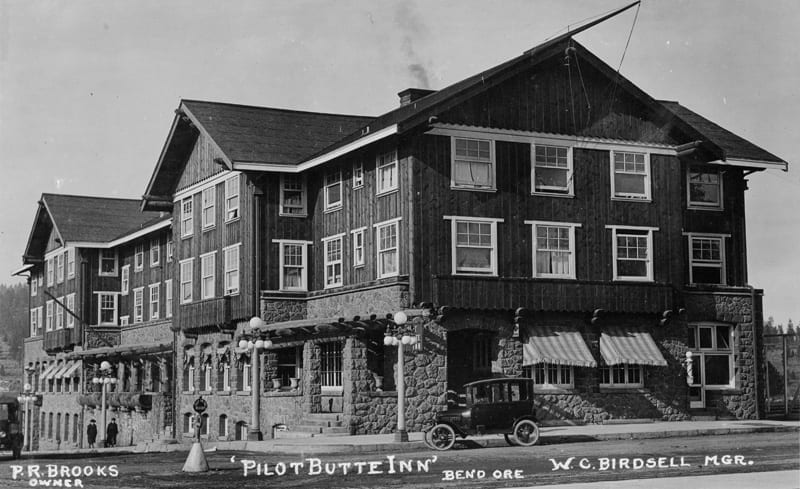 Maybe today, the story of Pilot Butte Inn would have ended differently, with the iconic building standing stately as a piece of living history. In a different time, it might have followed in the arc of the Tower Theatre, as a restored landmark and centerpiece of downtown Bend. Instead, the Swiss chalet-style hotel on the banks of the Deschutes River lives on in memories and photographs.

In half a century, the building went from being the community hub and pride of Bend to a neglected shell of its grandeur. Even a designation on the National Register of Historic Places in 1972 couldn’t save it. Less than a year later, Pilot Butte Inn was demolished. A headline from a Bulletin article on the day it was torn down in 1973 read, “Bend era ends with inn’s destruction.” Today, a bank, burrito joint and bakery stand in its place at the corner of Newport Avenue and Wall Street.

Using three-foot thick pine from the nearby forests and the river rock from the Deschutes River that ran just steps away, skilled carpenters and masons built the Pilot Butte Inn in 1917. The inn followed the opening of the two sawmills in 1916, solidifying Bend’s place as more than a homestead community. (Philip R. Brooks, a relative of the Brooks family of Brooks-Scanlon, Inc. financed the construction of the inn.) Designed as an alpine-style lodge by John E. Tourtellotte, Pilot Butte Inn was a destination for travelers, living out its best years in the heyday of motor tourism.

The inn was built with sixty guest rooms, additional construction over its lifetime added about one hundred more. The first floor had a large fireplace, private dining rooms for men and women, billiard and card rooms and a secret wine cellar. A picture window in the main dining room framed a panorama of the Cascade Mountain Range. Oregon was technically a dry state at the time of its construction, but the grand opening party had “no shortage of spirits” and brought people from all over the state, according to contemporary accounts. Famous guests at the inn included Oregon governors such as Oswald West. In 1934, Eleanor Roosevelt stayed at the inn and reportedly ate a planked trout in the dining room. 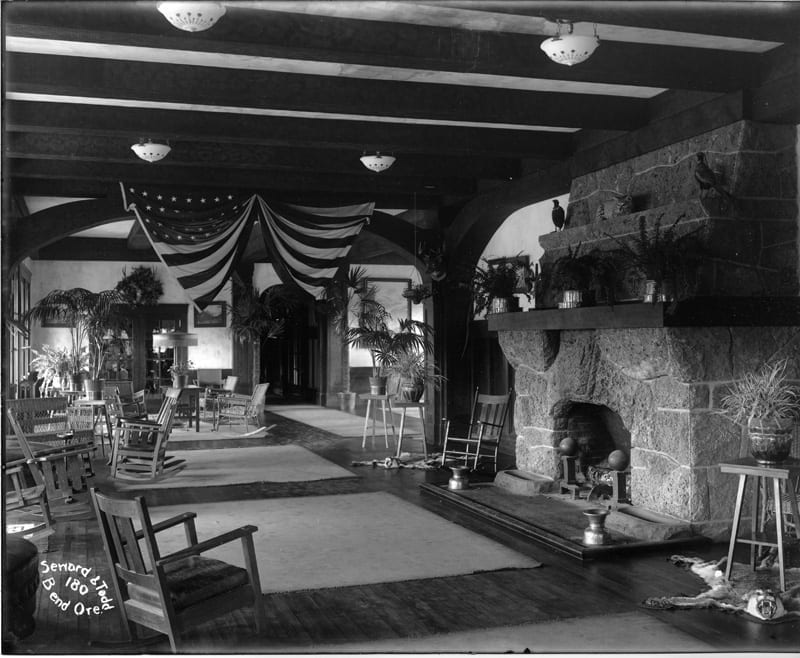 Bend historian Ila Grant Hopper described Pilot Butte Inn as the center of the town’s social life, with balls, banquets, conventions and weddings held there throughout the years. “But more than any other service, it provided community identity: it was Bend to outsiders, whose surprise and pleasure at encountering a hostelry of such excellence amid reaches of the interior were translated into grateful and lasting memory,” she wrote. “Should its familiar outline vanish from downtown Bend, something vital to the community spirit will be irrevocably lost.”

Beginning in the 1960s, the hotel went through a series of owners and fell into disarray. Local architecture student Jean Anderson was one of the strongest advocates for saving the hotel, but efforts to preserve the building were ultimately unsuccessful.

A piece of the inn does still remain in Bend, though. When the inn was demolished, the iconic stone fireplace was dismantled first, each stone carefully preserved so that one day the fireplace could be reconstructed. The fireplace now stands in the foyer of the Athletic Club of Bend, surrounded by historic photos and available for visitors (club members and non-members who come to dine at Bistro 28) who want to take in a genuine piece of some building blocks of Bend’s history.