You are here: Home / Business / Pioneer Ranch Knows the Beef 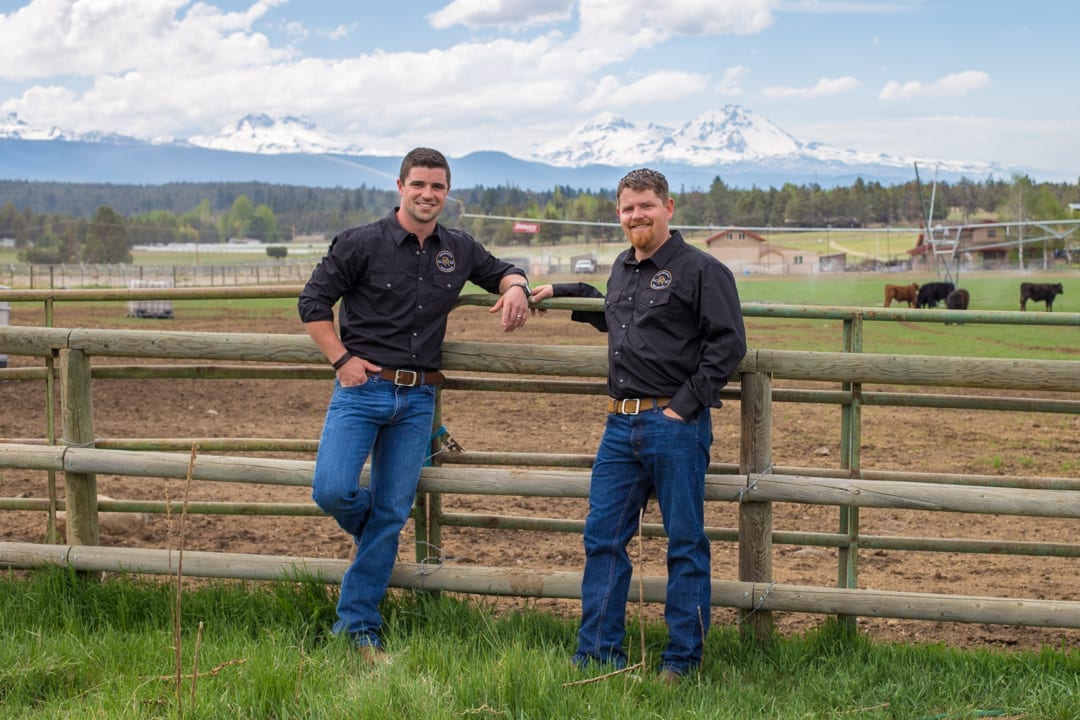 Beau Beach and Evan Moran at Pioneer Ranch in Tumalo.

There are no big iron gates at the entrance to the driveway that leads to Pioneer Ranch. There is no archway displaying the ranch’s brand. You won’t even find a horse on this thirty-acre property tucked between Bend and Sisters. What you will find is a herd of beef cattle lolling in a pasture framed by the Three Sisters mountains. The cows, a mix of beef cattle breeds, are the backbone of Pioneer’s booming artisan beef business. They are also the test subjects in owner Evan Moran’s ongoing quest to create the perfect steak.

Rewind to 2014. Moran, a pharmacist by trade, had recently relocated his family to Bend from the Fresno area. Moran was working at the Bend Rite Aid pharmacy and living on Bend’s west side when he started toying with the idea of buying some property and playing farmer. “It was really just to get out of town,” said Moran, during a recent tour of his property. “We went from one-third of an acre to thirty acres.”

Moran acquired five pigs within a few months after the move in 2015. At the same time, Moran had been developing a friendship with Beau Beach, the gregarious owner of Bom Dia coffee on College Way near Central Oregon Community College, where Moran would regularly stop in for a cup of joe. Beach is the product of a Cottage Grove logging family and grew up close to the land. A natural entrepreneur, Beach worked briefly in emergency services before realizing he was more suited to running a business than an ambulance.

Moran was going through a similar mid-career reevaluation when the two struck up a friendship. The duo started casually throwing business ideas around. Moran’s new property seemed like the perfect incubator for an artisan ranch concept. Moran would provide the land and handle the animal science. Beach would provide the entrepreneurial spark needed to differentiate Pioneer Ranch from the rest of the pack. With a handshake the business was born.

Just two years later, the operation has taken off. Pioneer Ranch is up to a population of nearly 100 beef cattle this year. The hog operation has outgrown a former horse corral and is set to move off-site to land leased from a neighbor. Customers meanwhile are lining up for Pioneer Ranch’s products, which are available in boxes of selected cuts of beef and/or pork through Pioneer’s website and available for pick-up at Bom Dia.

The key is flavor. The secret, said Beach, is a combination of breed and feed. When it comes to beef, the two believe they have hit on the perfect formula that relies on a traditional grass-fed pasture approach combined with a multistep grain-finish process that employs spent grains from local brewers and Bend Distillery. Pioneer takes a similar approach with its pigs, believing that good flavor can be developed. That has also allowed them to use non-traditional breeds, such as Berkshire pigs, one of the staples of Pioneer’s herd.

Beach credits Pioneer’s rapid growth in part to the unique product, but also Central Oregon’s conscientious consumers. “Bend is all about being local and being educated,” he said.

The response has Beach and Moran working long hours to meet demand, but it’s a good kind of busy. “It’s growing so much faster than we expected. Our business plan is changing on a daily basis,” said Beach.

Moran and Beach have big plans for the brand, for sure. In the meantime, you can sample their products as hamburgers, kebobs and more at regular tasting events at Bom Dia, where Beach is hosting a barbeque the first Wednesday of the month throughout the summer. You can also find them at the Tumalo Coffeehouse on Tuesdays, where they will be offering meals and selling their signature Pioneer Ranch select meat boxes. Pioneer will also be at all the requisite festivals, including Munch and Music, Bite of Bend and Bend Summer Festival.