You are here: Home / Adventure / The Tailgating All-Stars of Central Oregon

Ah, spring. The days last longer, the sun hangs higher, and the winter storms that bully our mountains are finally starting to chill. After a big day of play it’s time to kick back with refreshments, friends and a little entertainment, too. Want to up your own tailgating game? Learn from these Central Oregonians who take après outdoor gatherings to a championship level. 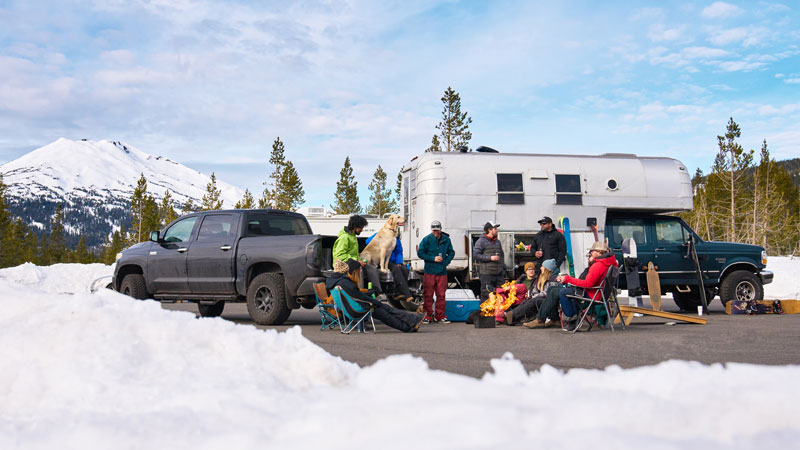 Keepers of the Mobile Lounge

Nadine Ruth and the Chix on Stix 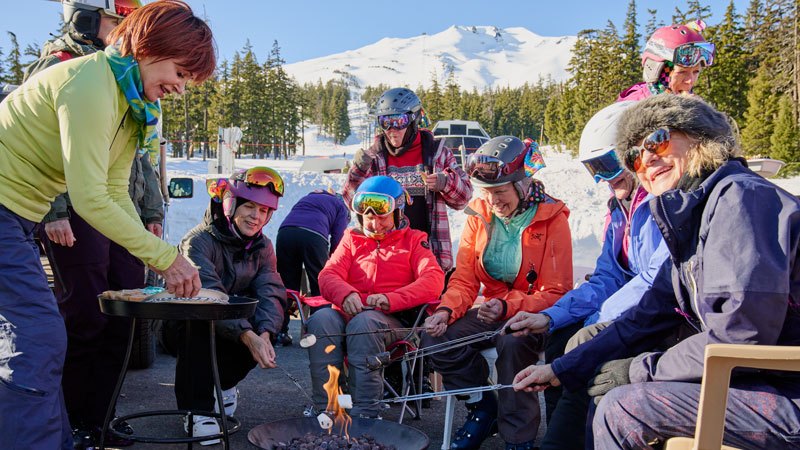 If you head up to Mount Bachelor on a warm spring day and see some ladies with flashy tie-dyed scarves dangling off the backs of their helmets, you should bow in awe before these “Chix” and then ask to follow them to their boisterous hang-out for lunch, the PALL.

The Chix on Stix clique goes back to at least 2005 when about a dozen women, nearly all of them retired and over 50, got together once a week for a day of skiing. Since then, the group has expanded to nearly sixty women, many of whom meet on Thursdays at ski racks outside the Sunrise Lodge. They’ll split up for the morning by ability and then meet back at the parking lot where Ruth’s pick-up truck acts as the gathering spot.

You can find her rig quite easily as she built a collapsible warming hut in the back of her truck using about $100 worth of PVC piping and sheets of heavy, clear plastic she picked up at Joann Fabrics. A portable propane fire pit keeps the space toasty while carpets make the bed less slippery in ski boots. If you’re still not sure, look for the words, Chix on Stix, emblazoned on the side.

Typically, everyone just brings their own lunch, but birthdays are cause for celebration. For Ruth’s seventy-fourth birthday last March, someone brought a barbecue and s’mores and fired up the tunes for dancing. “We all share a love for being outside and skiing,” she says. “I don’t ever want to give that up, which is why I have a new knee.”

The Master of Entertainment

If you head up to Benson Sno Park near Hoodoo Ski Area off Santiam Pass on a Friday or a Saturday night, chances are high you’ll find a crew of hard-bitten skiers and snowboarders sitting around watching a movie outside. There’ll be a fire going and maybe even a tuning bench set in the snow, complete with a hot iron to wax your boards. And is that a pot roast you’re smelling? Why, yes, it just might be.

Cameron Halmrast and his friends have their post-ski situation dialed. The 36-year-old web developer manager for Springfield-based Richardson, a performance headwear company, started skiing at Willamette Pass before switching to Hoodoo, where he has held a season pass for years. Being up there almost every weekend allowed him to quickly fall in with employees and friends who “post up” at Benson. “We don’t plan,” he says. “We’ll just connect with one another once we’re up there.”

Together they’ve created the ultimate place to recharge. Halmrast scored a $5,000 Panasonic projector for less than $100 at a sale in Eugene. With additional help from an Amazon Fire Stick, his phone and a 360-degree speaker, Halmrast can project ski flicks onto a 120-inch screen he brings along for immersive, al fresco entertainment. They’ll play bocce ball and build a fire. To refuel after a hard day of running laps off the Big Green Machine lift, Halmrast breaks out an Instant Pot to whip up meals like jambalaya, huevos rancheros and even a roast. Another friend went so far as to bring a smoker up there to finish it off. “The only issue was having the silverware to cut it,” he says.

Halmrast jokes the only thing they’re missing is the kitchen sink. “I’m just trying to bring some of the fun,” he says.

The Guy with the Coolest Rig 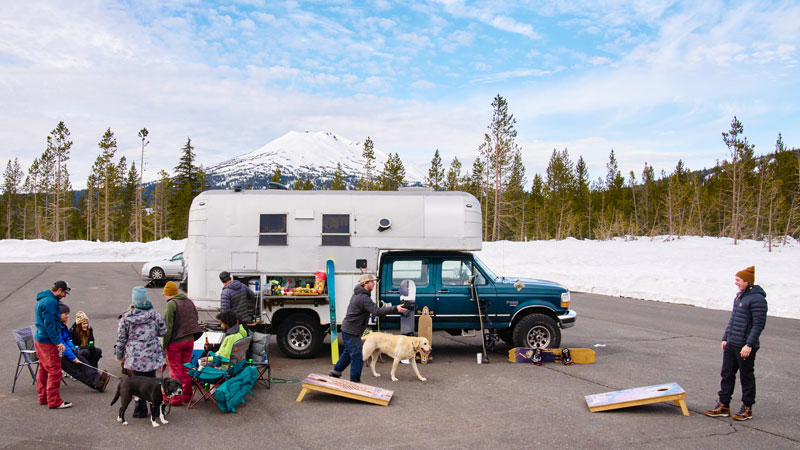 You’ve probably seen it parked against the snowbank at the Sunrise middle lot at Mount Bachelor and wondered: Is that a spaceship that crashed into a Ford? A James Bond villain vehicle? A steampunk’s fever dream? Nope, it’s Jeff Harris’ custom late-1960s vintage camper, the rig so many people naturally gravitate to when the day is done. 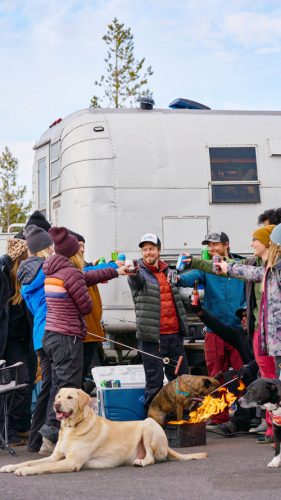 “My three design words are submarine, UFO and log cabin,” says Harris, 33, who teaches skiing and snowboarding at Mt. Bachelor. “I’m just really drawn to that ‘60s deco style because it’s fun and unique. I think I’ve built pretty much one of the only ones like this anywhere.”

Harris has spent years and untold thousands of dollars rebuilding and customizing the cab-over camper using the dilapidated husk of a Avion-brand frame he found for $1,600 on Craigslist. He knows what he’s doing. He first moved to Bend a few years ago to work on restoring vintage Airstreams for a small company in town and once even converted one of the classically retro silver tubes into a two-chair hair salon for a client in California. With his own rig, he’s installed steel plate countertops, a futon and floating, movable tables that can become a ski tuning bench. There’s a thirty-two-inch Smart TV up over the cab and LED lights that cast a cozy glow across his powder boards stored inside. An open floor plan means he can stretch out. “Even with people hanging out in here, it isn’t cramped,” he says.

Harris often takes his rig down to Wanoga Sno Park where the scene can get rowdy with snowmobilers tailgating after ripping around in the woods. Other times you’ll find him at Kapka Butte (“more mellow”) or even in Bend near the Old Mill when concerts are in town. “I can pump out some sound,” he says. “I mean, everybody is attracted to the thing. It’s pretty awesome.” 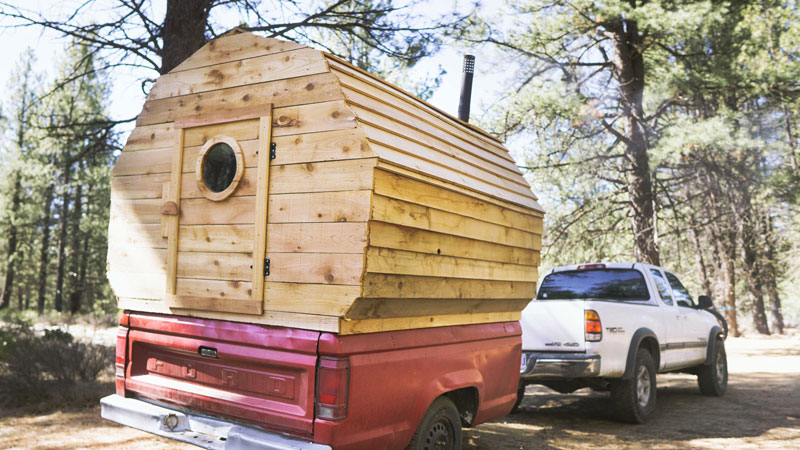 You bought a portable fire pit. You’ve got your gravity chairs and a folding table that’s perfect for holding an infrared, no-flare-up grill. Maybe you even have some battery-powered Christmas lights for extra ambiance when the sun dips low. But does your set-up include a portable wood-fired sauna? Tobias Scott Carleton’s sure does.

“I’ve always really enjoyed building stuff like saunas and hot tubs,” says the 25-year-old Central Oregon Community College student. “The ability to have a sauna I can bring around to places, it’s awesome.”

Carleton got his skills serving in the Coast Guard as a damage control guy who specialized in welding, plumbing and carpentry. He spent about forty hours building the sauna out of cedar fence wood mounted in the back of a trailer converted from a cheap truck bed he found online. Inside he added benches for six people with built-in firewood storage, a porthole window for watching the snow fall, string lights and a small wood stove that hunters might use in a warming tent. Metal tubing and flanges connect the interior of the stove to the exterior of the trailer to suck in fresh air that gets the fire roaring. “I also didn’t want to be competing with the fire for oxygen.”

“The stove gets ripping to the point it glows red,” he says, adding that a pot of water with eucalyptus oil atop the stove adds the vapor.

You can find Carleton at any number of the local trailheads where he loves to cast off on long mountain bike rides or at scenic viewpoints along Tumalo Creek. Last fall, scores of grateful kayakers piled into it at Benham Falls, where about sixty paddlers had gathered on a freezing day for an informal race to raise money for kayaker Alex Kollar, 28, who went missing on the Deschutes River in October.

Chances are good you may see two of these saunas floating around Bend soon, too. “I’m selling this one to build another one,” he says. “I’m always looking for my next project.”

The thing that separates memorable tailgating sessions from the mediocre really boils down to one thing: food. Burgers and dogs are great—especially if you make your own kraut!—but try these easy, make-ahead treats that you can heat and serve out of a pot.

Chicken and dumplings: Thick and
gut-warming, add a splash of extra veggie or chicken broth to the pot before warming.

Jambalaya: Shrimp, sausage, chicken, ham: all the food groups in one delicious bowl; add a splash of broth to the pot before reheating. Serve over rice or with tortillas.

Chicken Tikka Masala: Make it in an Instant Pot at home. Reheats beautifully.

Ramen: Technically, a two-pot endeavor but very easy and guaranteed to impress. Make the broth ahead of time and reheat when needed; cook noodles in a separate pot. Use tongs to dish wet noodles into a bowl, add paper thin slices of raw steak, bok choy, mushrooms and green onions to bowl; ladle piping hot broth over noodles and serve immediately. Let guests add their own chili oil, sesame oil, and shichimi togarashi, the Japanese seven-spice condiment that adds some kick. Savory Spice in the Old Mill sells it.

Read more of our past feature articles here.