You are here: Home / Business / How Travis Yamada Shaped a Community Out of Alternative Sports

How Travis Yamada, aka “the most humble dude ever,” became the unofficial ambassador of surfing and skating in Bend.

The Travis Yamada story picks up in the present tense, as he hovers over a surfboard-shaped piece of foam in the middle of a small, blue-walled room that serves as his workshop and corporate headquarters. Working deliberately, he saws out the rails, planes in the rocker and regularly pauses to pick up the blank, examining his work with the critical eye of a confident perfectionist.

Not far away, wetsuit-clad river rats are surfing Yamada’s boards at Bend’s Whitewater Park, stoked on the smooth green wave and on the laid-back scene. Just a few miles east, a new generation of skateboarders are ripping around the polished concrete bowls and ramps in the Ponderosa 2 skateboard park off Wilson Avenue. The riders may or may not know Travis Yamada, but his fingerprints are all over their urban playgrounds.

To understand that you must go back to where Yamada’s story begins—way back to the early 1980s in California’s Central Valley. It was there that Yamada, whose mother traces her roots back multiple generations, developed his cowboy work ethic, code of responsibility and his love of mountains. Those traits carried him through a stint as a professional snowboarder, fueled his drive to start his own businesses and saw him evolve from a skate punk to a skateboard ambassador, giving voice to a population that was often overlooked by the mainstream. 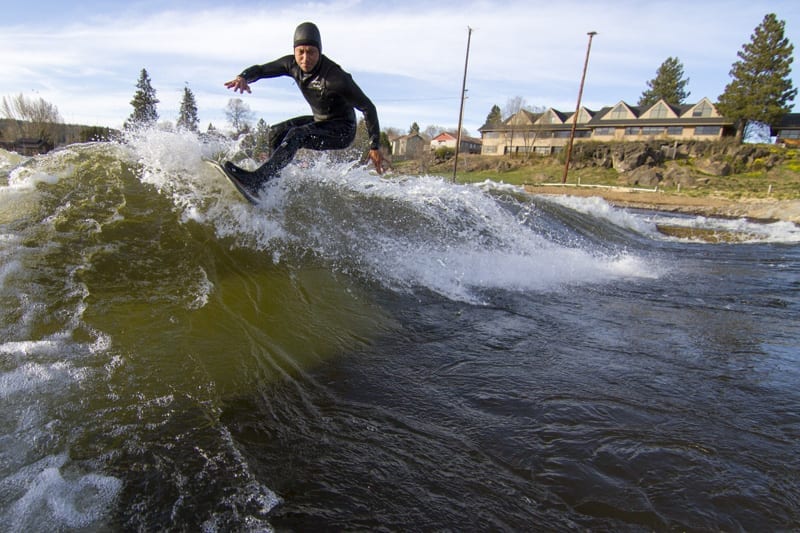 Jump back to Yamada’s latest enterprise, a freshwater and saltwater surfboard shaping company, dubbed Cubicle. Like Gerry Lopez, another Bend icon, Yamada has taken his talent for carving lines into cornices and curling waves and turned it into a passion for creating unique products that allow others to do the same. On the blue walls hang a master craftsman’s quiver of templates, saws, planers, calipers and sandpaper, all testifying to the complexity of building surfboards. “I’m not trying to reinvent the wheel,” said Yamada. “Surfers figured this out a long time ago.” He’s too modest to admit it, but Travis has also helped pioneer the evolution of river surfboards and river surfing, especially in Bend.

Innovation has followed Yamada ever since he first stood on a skateboard as a kid in the early 80s. His charisma and business acumen, combined with his skilled hands and his experience as a former pro snowboarder, have led Yamada to pursue a lifestyle rooted in surf, skate and snow. The Bend community has supported Yamada for more than twenty-five years, and in return Yamada has made this place more fun, in a sideways-riding fashion. 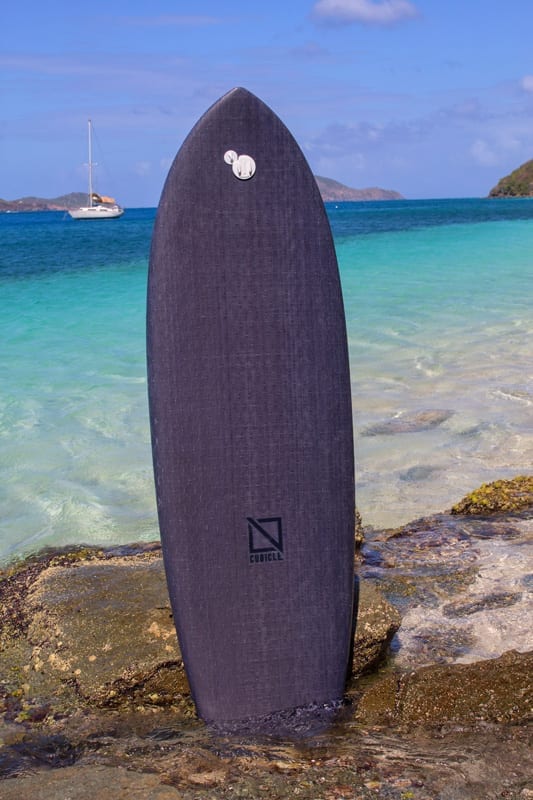 Yamada grew up on a cattle ranch in Sonora, California, a rural town in the gold rush foothills of the western Sierra Nevada, where skateboarding was culturally a crime. The son of a Japanese-American father and a mother whose family homesteaded Sonora, Yamada followed his own line early in life. Around sixth grade, Yamada discovered snowboarding in the back pages of Thrasher skateboard magazine. So his dad rented him a board and drove him up to Boreal, where Yamada wrapped his Air Jordan skate shoes in plastic grocery bags, stuffed them into his moon boots and slid down the hill. “I was hooked from there.”

Yamada’s commitment only gained momentum, and he let his life follow it. His evolution from rider to ambassador was, in some ways, as natural as a backside carve. In the early 2000s, Bend skaters had eyed up a plot of dirt under an overpass at Division Street, where the construction of the Bend Parkway had created an urban vacuum of sorts in the neighborhood just north of downtown. Inspired by places like Portland’s Burnside skatepark, Bend skaters envisioned a true grassroots skatepark. Eventually, to make it happen, a handful of skaters organized under the name PUSH, Promoting Urban Skate Habitats. Yamada served as PUSH’s de facto leader. “He’s a great ambassador,” said Christopher “Topher” Laws, a Bend skater and snowboarder who joined PUSH early on. “Travis knows how to read people, and he knows how to get his point across in a very professional way.”

By 2009, PUSH held its first of four fundraisers—actually huge parties downtown, with food, beer, live music and an auction of 100 skateboards painted by local artist friends, all proceeds going to the cause. In total, they raised close to $40,000. Though the Division Street project stalled, the seed had been planted. Led by Yamada and other veteran skaters, PUSH approached Bend Park and Recreation District about a collaboration.

Yamada’s diplomacy paid off, and his argument convinced people like Matt Mercer, the district’s Director of Recreation Services. “The most important thing Travis did was to challenge everybody, including the Park and Recreation District, to consider skate parks as essentially just another amenity in the development of a park, like playgrounds, tennis or basketball courts. And that’s just what we’re doing now,” explained Mercer. Ponderosa 2 finally opened in 2014, and Bend’s newest skate park, part of Rockridge Park, which opened this fall, included skateboarding from the start.

Meanwhile, work had begun on Bend’s Whitewater Park, which included a wave for river surfing. Yamada and friends had been riding standing waves in Central Oregon irrigation canals for more than a decade, a common, though illegal, practice. Hopes were high for the new whitewater park when it debuted in September 2015. Despite much fanfare, the wave, like other elements of the $8 million dollar whitewater park, was not performing as advertised. While some grumbled and kvetched, Yamada and others pushed back, urging the park district to rework the primary features for a better experience.

Ryan Richard, the Bend Park and Recreation District’s wave shaper, has worked with Yamada and the Bend Surf Alliance for more than two years now. “Travis’ best role in talking with Park & Rec is his levelheadedness. He’s always even-keeled, he doesn’t get amped up like a lot of other guys do,” Richard said.

Yamada doesn’t take credit for developing the river wave. But he did help organize the surf community, “to convey our message,” he said, “and not come off as a bunch of whiners.” Just as he did with PUSH, Yamada proposed collaborative solutions.

Scott Huggin, a surfer who worked with Yamada on the whitewater wave, likewise gives Yamada props. “Without Travis, I don’t know where the wave would be right now in terms of a surf wave. I don’t know if anyone would be surfing. Travis wanted a successful wave for the community, but also for himself!”

Yamada is proud of the role he’s played in the projects and he’s excited about the prospects for his company. Still, he keeps things in perspective. “There are people in life doing important stuff. This isn’t important; this is fun. Doctors are saving lives, and I’m making toys, basically.” 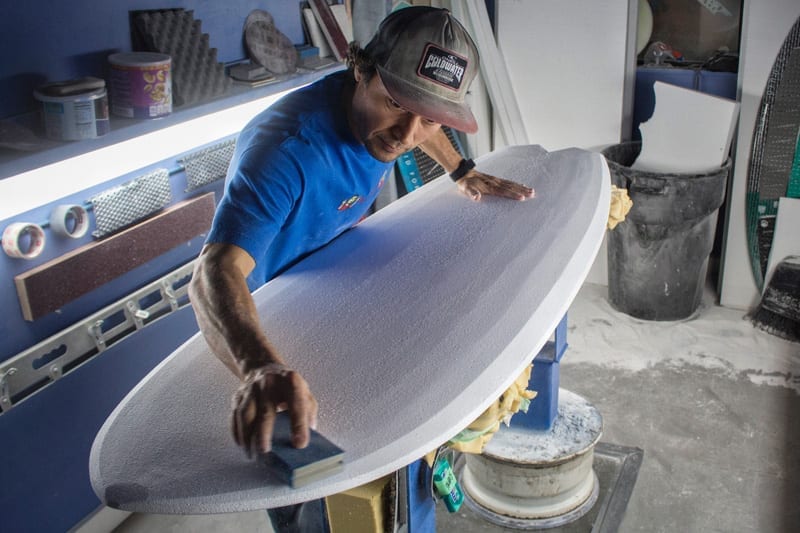 For all he has done, Bend is paying Yamada back in an indirect, double-edged way—by ordering so many boards that Yamada said he hardly has time to do product testing. Ryan Richard, who rides one of Yamada’s Cubicle boards, laughed at this: “I look over my shoulder and always see him creeping from the Colorado Avenue bridge! Still, when he surfs, he rips, man. He reminds me of a bee flying across the face, super agile, super fast.”

Yamada has focused himself on building his brand, which has him working such long days into the night. He has a problem with trying to do everything himself. It’s a weakness he’s aware of, a lesson he said he’s learned, but still hasn’t implemented. As Josh Dirksen put it, “He’s definitely not working at factory speed. He’s doing every board perfectly, how it should be done.”

Rewind back to Yamada’s pro snowboarding days. He’d been working construction during the summers to make ends meet so he could ride all winter. Then his knees got in the way. After two ACL reconstuctions, Yamada knew it was time to let the dream go. “It kinda fizzled out. But I was okay with that. I never thought being pro was sustainable anyhow.”

So he adapted to the new reality, shifted his focus to business and applied his skills in equally successful ways. First, Yamada started Deck Tech, a deck restoration outfit with a loyal following. Next came Paint Tech, a partnership with childhood friend Brent Rankin, who noticed Yamada’s “insane attention to detail.”

“I think Travis adopted his grandfather’s old cowboy ways of doing right by people,” said Rankin. “And that transfers into all aspects of business. Travis respects the people he works with and the clients he works for. It’s partly his boyish charm, his country gentleman style mixed with hip skateboard and snowboard kid.”

Around Bend, you’d be hard-pressed to find someone with a bad thing to say about Yamada. To his friends’ kids, he’s Uncle Travis. But Yamada himself readily admits that it’s not all parties and powder days. “I can be stubborn as hell. I like challenges, to a fault. And I’m really good at making things more complicated or difficult. I think I’m a bit of a masochist in that way.”

Yamada considers himself overly meticulous, “OCD-style,” yet he finds the positive in this like he does with whatever else he’s involved in. “I think that’s what has allowed me, in a short amount of time, to make these boards to surf shop quality. But I haven’t mastered it, and I’m not even close.”

Obsessive perfectionism may slow Yamada down, but the final product honors the countless hours spent designing, shaping, glassing and sanding a board. “Travis loves making things he can put his name on and be proud about,” said longtime friend Rankin. “He does things the way he wants, the way he’d want them done for himself.” Which is why fellow rippers like Josh Dirksen and Curtis Ciszek, who has a Cubicle pro model, ride Yamada’s boards.

“I think Travis’ genuine, legitimate drive for doing what he does is sharing what he loves. Being an ambassador of the sport, making amazing surfboards—he does it because he wants to share that experience with other people. He’s the most humble dude ever,” said wave shaper Richard.

Starting his own surfboard brand has provided Yamada with a welcome challenge, despite the requisite sacrifices. “Figuring out what somebody needs to surf better, being able to execute it, and then delivering something that will improve their surfing is more rewarding than going down to the wave and getting better myself,” Yamada said. “The best part is changing someone’s surfing—they couldn’t be happier. I’ve seen it a bunch. I love that, and I want to continue doing that.”