You are here: Home / Adventure / Uniting the Bouldering Community is a Tough Climb 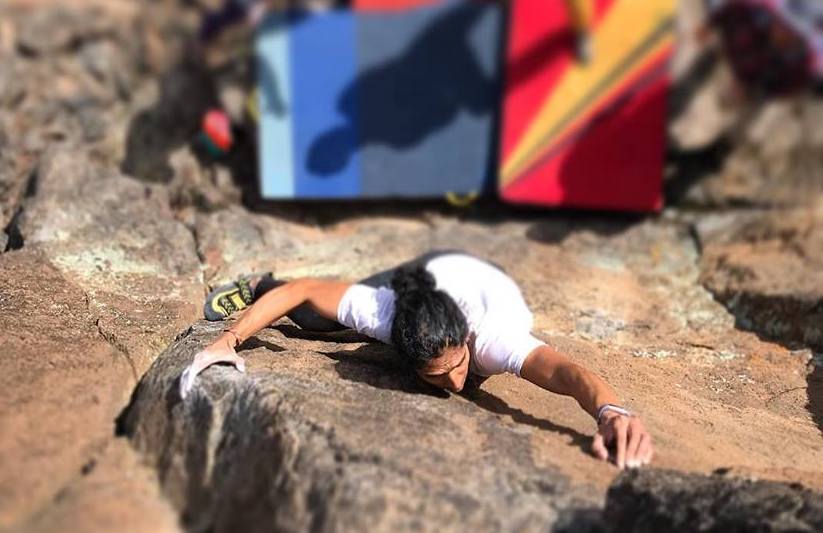 Any mention of rock climbing in Central Oregon immediately conjures up images of daredevil climbers navigating the sheer walls of Smith Rock State Park. Climbers flock from every part of the world to try their hand at summiting Monkey Face and get a taste of the beautiful Oregon scenery. While the rope climbing at Smith Rock is world-renowned, it’s only a slice of what the region has to offer climbers. Bend boasts many lesser-known bouldering sports right in town.

Bouldering is a style of climbing on smaller rock formations and uses “crash pads” as protection instead of ropes or harnesses. It started out as a means to warm-up and practice for rope climbing. Over time, however, with the spread of bouldering gyms, competitions and media coverage, it has evolved into its own subcategory of climbing. While climbers have been bouldering in Central Oregon for decades, up until last year, information about Central Oregon’s many bouldering spots spread through word of mouth from climber to climber.

Last fall, Jason Chinchen, a man of many trades including woodworking and graphic design, authored and designed Central Oregon Bouldering, the first guidebook for Bend’s bouldering areas. The book has more than 1,200 climbing routes or “problems” at ten areas near the Deschutes River Trail and off Cascade Lakes Scenic Byway.

Chinchen has lived in Bend intermittently since the ’90s, originally moving to Central Oregon to climb at Smith Rock. Over the years, he has also lived in Bishop, California, the epicenter for bouldering in the United States. There, the climbing community rallies around bouldering and has a developed guidebook with more than 2,300 routes. Upon returning to Bend, Chinchen found the outdoor bouldering community here underdeveloped.

“When I came back here, the climbing community was really focused around the climbing gym and around Smith Rock, and there were very few people bouldering,” said Chinchen. “I tried to find people to go out and climb with me, but I had a really hard time.”

When word got out about the book being published, there was some pushback. Local climbers argued that the book would bring more traffic, increasing risk of misuse and expose spots that had formerly been well-kept secrets. Alan Watts, the developer of many Smith Rock routes and the author of the Smith Rock climbing guidebook, explained this dilemma in the foreword of Chinchen’s book.

“Bouldering in Central Oregon has long been shrouded in mystery — a closely held secret protected by tight-lipped locals,” said Watts. “Guidebooks are a paradox. On the one hand there’s little question they bring far more people into bouldering areas once enjoyed by a privileged few. But on the other hand, the influx of people sparks development and brings fresh blood and energy to scenes that might otherwise grow stagnant.”

Mike Rougeux, the Climbing Program Director at Bend Endurance Academy (BEA), argued that the book continues the tradition of passing information down between climbing groups but in a different format.

Rougeux said that the book has solidified and legitimized bouldering in Central Oregon and established boulderers as actual user groups. These bouldering areas have seen more traffic recently, not just because of the book but because of the growth of Bend. The book includes ten areas, so instead of climbers being concentrated at a few of the more well-known spots, it actually spreads them out.

After publishing his book, Chinchen helped establish the High Desert Climbers Alliance (HDCA), a nonprofit dedicated to working with land managers to protect these areas and mitigating any problems caused by increased traffic. Newly-formed, HDCA has taken on the responsibility of protecting all rope climbing and bouldering in Central Oregon aside from Smith Rock, which has its own organization.

HDCA is now working with the Forest Service and has coordinated trail work plans at Meadow Camp, an area along the river with both rope climbing and bouldering. Rougeux is one of HDCA’s four officers, in addition to working with BEA. He is currently working with Central Oregon Trail Alliance (COTA) on the mountain bike trail being rerouted through the Widgi Boulders, near the Widgi Creek Golf Club.

“The biggest thing for us right now is putting the pieces in place for the continued growth of the sport and the growth of Bend,” said Rougeux. “We are trying to make sure climbers are represented in the community.”

Both the book and HDCA were created to bridge divides in the bouldering community.

“When you have a community that’s unified, we can get things done,” said Chinchen. “I think that my part has been done to give a central view and something for the community to gather around.”