You are here: Home / Home / A Touch of Modern: Bend’s historic Claypool home gets a major makeover

A historical home renovation should honor the past while looking to the future. That’s exactly what Justin Brevoort accomplished in his recent makeover of Bend’s “Claypool House.” 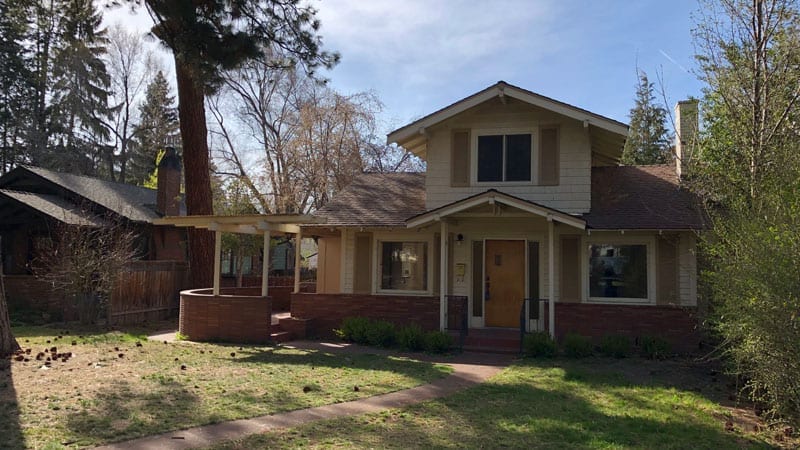 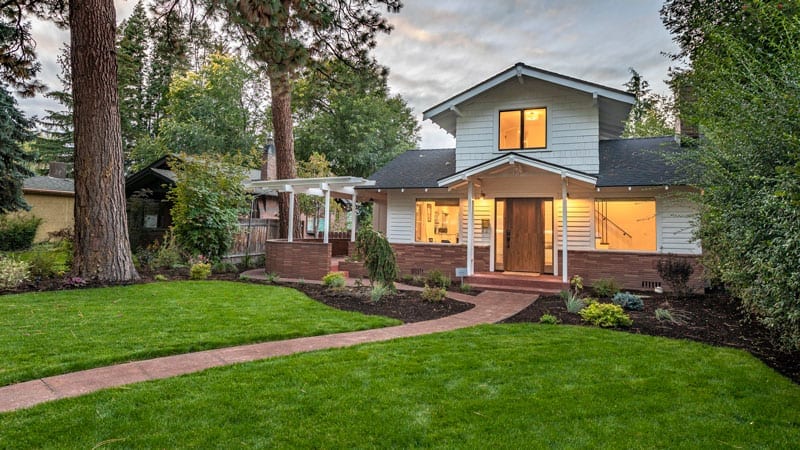 The Craftsman-style bungalow was built in 1919 and typical for the time: living room in the front, small kitchen toward the back, one bath on the main floor and bedrooms upstairs. There was nothing particularly remarkable about the Drake Park area home, save the fact that for almost a century it was inhabited by one family.

Guy and Doris Claypool owned Claypool Furniture Store on Wall Street from 1936 to 1999. They bought their modest home on Congress Street in 1929 for $1,500. There they stayed for more than eighty years, according to their son, Dale.

“In the 1950s, Dad sold the place and bought another home on east Eighth Street where everyone was moving,” Dale recalled. “That lasted about two months—Dad wasn’t comfortable in his new neighborhood. He bought his old house back, which cost him a fortune.”

Dale said that after his parents got the house back, they built a two-story addition in the rear, which had a fireplace, bath and entrance. His mother occupied the original part of the house until her death in 2010 at the age of 103. Dale sold the house in 2011, and ownership passed through a couple of hands before Brevoort bought it in May 2018.

“The first thing that grabbed me was how unique its architecture was for Bend. It combined Craftsman with elements of Southern California style, plus I liked its location in the Drake Park Neighborhood District,” he said.

But signs of recent neglect were showing. The siding was peeling off, and the roof was sagging. At one point, doors and windows were boarded over in plywood. “It was an eyesore on a street where other homes around it had been remodeled,” Brevoort said. 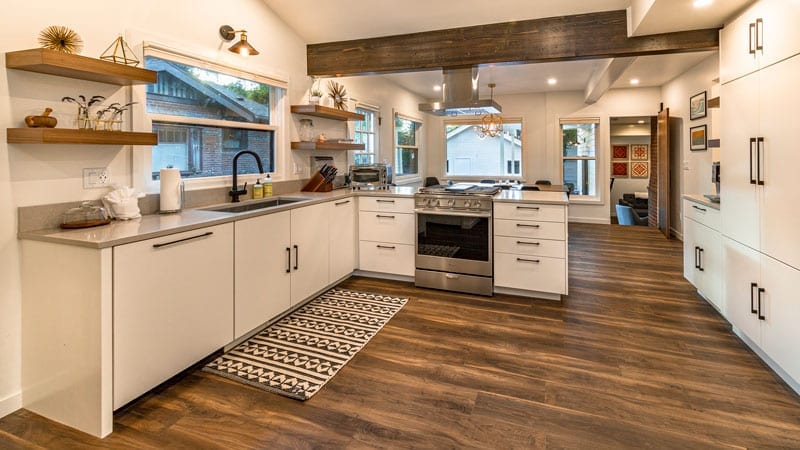 Large windows, a high ceiling and white cabinets draw chefs and visitors alike into the cheery space for hanging out or sitting around the dinner table.

A native Oregonian who grew up in Keizer, Brevoort spent many family vacations in Sunriver and Bend. He attended Central Oregon Community College and was a “snowboard bum” in the ’90s. Brevoort now lives in Hermosa Beach where he has a design firm, Creative Labz. Buying the Claypool home was an opportunity to reconnect with Bend. But it was also a significant undertaking to manage remotely. As an experienced home builder and remodeler, Brevoort envisioned a restoration that would bring the residence into the 21st century.  Open spaces and modern finishes set the tone on the inside while the home’s exterior was renovated to meet the city’s historic preservation codes on the outside.

He assembled a team of designers, including his cousin Josh Brevoort of 0-plus, and Seth Ehlinger and Kadi Driver of Dos Designers. He selected Ryan Carroll Construction to handle the building phase, and Michelle Redo helped with the interior design. “We tried to balance modern building concepts with the home’s century-old roots while also adding creature comforts,” he said.

The first step was to gut much of the interior and pull out old wiring and plumbing. New walls, insulation and windows came next, along with a floor plan that preserved the 1950’s-era addition while transforming the main level into a great room that created a casual gathering space. While maintaining the ceiling height in the living room, the builder removed the attic over the kitchen, opening the area and bringing in more light. 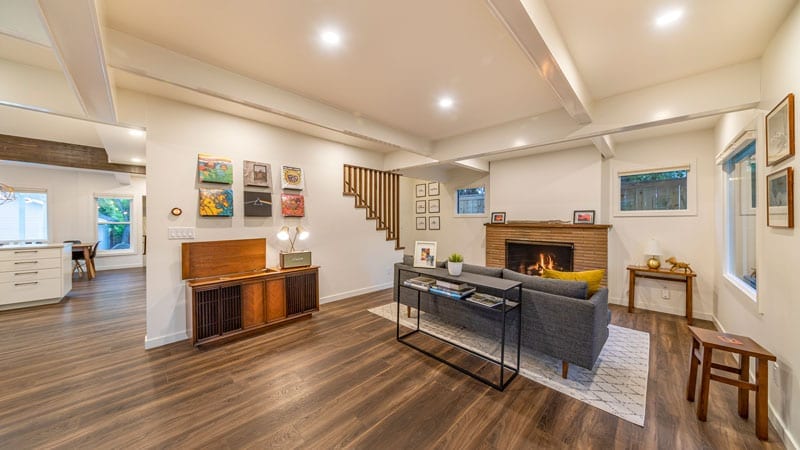 Living room and original fireplace decked out in mid-century furnishings, including the RCA Victor record player.

A Japanese-inspired staircase with vertical, walnut slants beckons visitors upward to the second story. The front, east-facing bedroom features the original upper window visible from the street. At the other end is the west-facing master bedroom where the team replaced two windows with five, modernizing the back corner of the home and revealing a bird’s eye view. The master bath features a converted vintage credenza with two sinks in place of a traditional vanity.  Between the two bedrooms is what Brevoort calls a “flex” room with sleeper sofa, a closet housing the washer and dryer and space for storage. A second upstairs bathroom is just off the hallway and contains a sink from the original house and a front porch light repurposed for the vanity. All the baths have black and white natural stone hexagonal tiles, quartz countertops and subway tile in the showers. 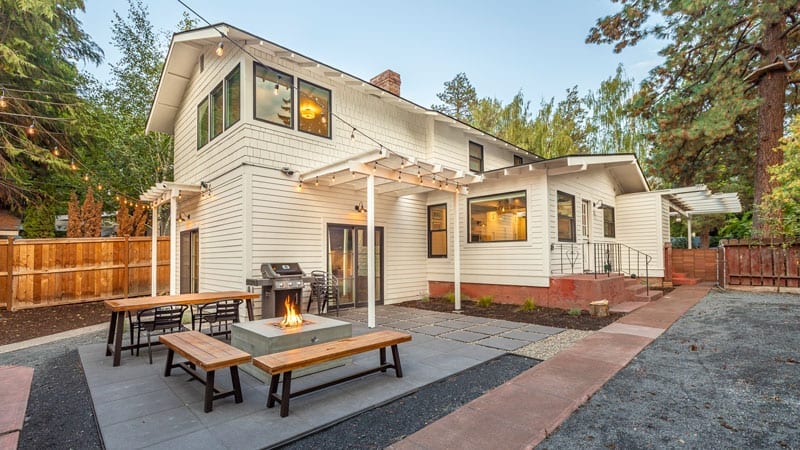 A new patio, pergolas and a gas firepit are some of the exterior upgrades.

Brevoort in the home.

The exterior also got a facelift. With approval from historical preservation groups, Brevoort’s team painted the entire home white, removed visual clutter, like overhead wires. They added sliding doors to the kitchen and rear addition, removed false window shutters and added pergolas on the west and south sides to blend with an existing open-porch pergola. The team also redid the entire yard with contemporary walkways and planting beds, and created a back patio with concrete pavers, a fire pit and outdoor seating and dining. It also preserved a curved, Roman-brick wall encasing a small veranda.

The interior décor and furnishings honor early 20th-century style trends, including art deco and post-war or mid-century modernism. A functioning RCA Victor record player stands beneath a wall covered in vinyl records that guests can enjoy. (He received city approval to use the home as a vacation rental and believes that this will allow him to share its history and location with Central Oregon visitors.) Most of the furniture is walnut, and an eclectic array of colorful artwork, including Shepherd Fairey prints, hang throughout the residence.

In the case of the Claypool, he’s rescued a bit of Bend’s history and repackaged it for another generation. “I’m passionate about real estate,” he said. “By building or improving structures, a person can leave a mark or legacy.”

Share This Article
« Float On: Embracing the art of nothing at Easy Float Bend
John Paul: An atypical jeweler »