You are here: Home / Adventure / Where to Cycle in Central Oregon This Summer

Explore the region on two wheels by checking out these scenic bikeways and fun biking routes. 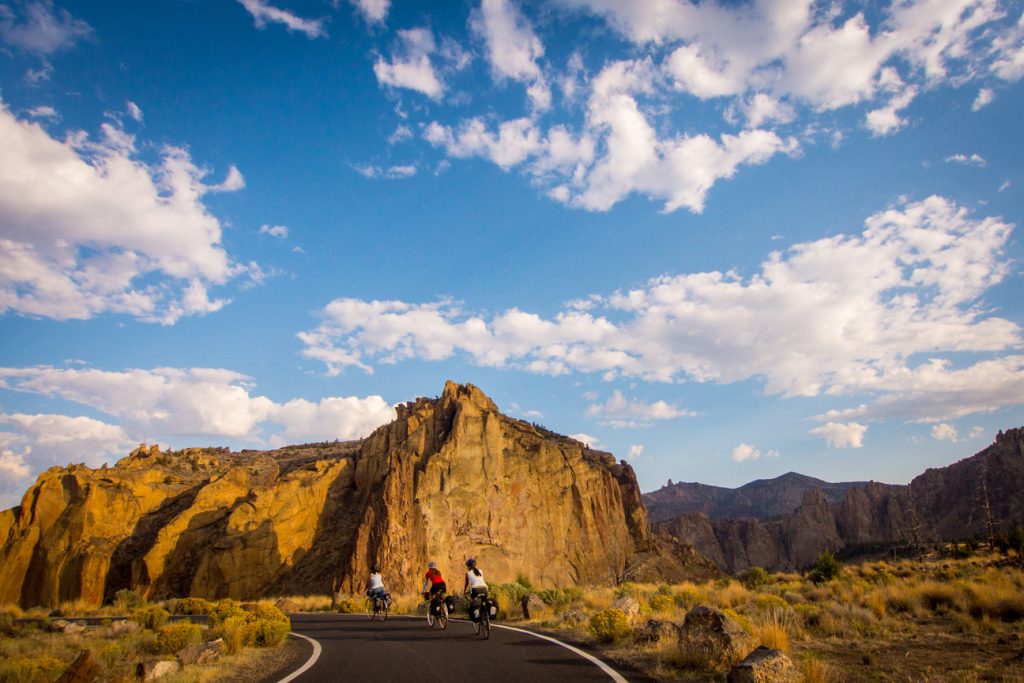 Oregon is a cycling mecca, especially in the summer, with more than a dozen designated scenic bikeways around the state. These routes take riders on journeys that combine scenery and history, winding through farmlands, over mountains and along rivers. The bikeways showcase some of Oregon’s small towns and are major contributors to the state’s rural tourism economy. Central Oregon has a number of designated bikeways that showcase some of the region’s diverse geography.. Here are the best routes to ride this summer.

Distance: Up to 24 miles
Difficulty: Easy to challenging
Don’t Miss: Stopping at the headwaters of the Metolius River.

Twin Bridges Scenic Bikeway starts at the heart of downtown Bend in Drake Park. Over the thirty-six-mile loop ride, travel through Shevlin Park just outside of Bend and then end at Tumalo State Park before turning around. This ride has a few challenging hills, but it’s great for beginning road cyclists. A note of caution: This route was designed to ride only in the clockwise direction for safety.

Distance: 36-mile loop
Difficulty: Moderate
Don’t Miss: Stopping for fuel at the Tumalo food truck pod, where you’ll find a solid mix of food to eat as well as beer on tap to rehydrate.

If you’re a beginner road cyclist, or if you’re looking for one of the easier scenic bikeways for a day, check out the Sisters to Smith Rock Scenic Bikeway. The thirty-seven-mile ride will take you on a Old West style tour of the region, starting in the small town of Sisters, then following scenic and low-traffic rural roads to Smith Rock in Terrebonne. The route distance is one-way, so you can turn this into a two-day trip by camping at Smith Rock, then heading back along the same route that offers a challenge with more uphill climbs.

Distance: 37 miles
Difficulty: Moderate
Don’t Miss: Lunch at Terrebonne Depot, with a stunning view of Smith Rock on the side.

If you’re looking for solitude and stunning views, check out the Sherar’s Falls Scenic Bikeway. About two hours from Bend, this route takes you through some of the charming river towns in between the high desert and the Columbia River Gorge. Starting in Maupin, one of the most popular places for fishing and rafting in the state, the route starts with a tough but short climb out of town, then rewards you with unobstructed view of Mount Hood and the Deschutes River. Then you’ll loop around toward White River Falls State Park, the eponymous Sherar’s Falls and back into Maupin.

This loop begins and ends in Madras and winds through the rural farmland in Central Oregon. You’ll pass through the small towns of Culver and Metolius. This is a great route to bikepack and camp on the shores of Lake Billy Chinook. While the route is a few miles shorter than other scenic bikeways, it doesn’t skimp on hills to climb.

Distance: 29 miles
Difficulty: Moderate
Don’t Miss: Round Butte Overlook Park, where you can take a break and try to spot the wildlife like golden eagles that frequent the area.

One of Oregon’s newest scenic bikeway designations, the Crooked River Canyon Scenic Bikeway starts at Rimrock Park in Prineville and winds along the rural roads and parallel geologic rock formations that will intrigue and inspire. Ride along the Wild & Scenic Crooked River, stopping for a break or lunch at any scenic spot on the water and ending at Prineville Reservoir before turning around.

Distance: 37 miles total
Difficulty: Moderate
Don’t Miss: Stopping at the Tastee Treet in Prineville, where you can treat yourself to a classic cheeseburger and milkshake after the ride.

Share This Article
« Weekend Roundup: May 23-28
Take A Dip In These Alpine Lakes This Summer »