You are here: Home / Home / Hawk’s-Eye View: Home Inspired By The Wings Of A Bird

An alpine-view home inspired by the wings of a bird of prey. 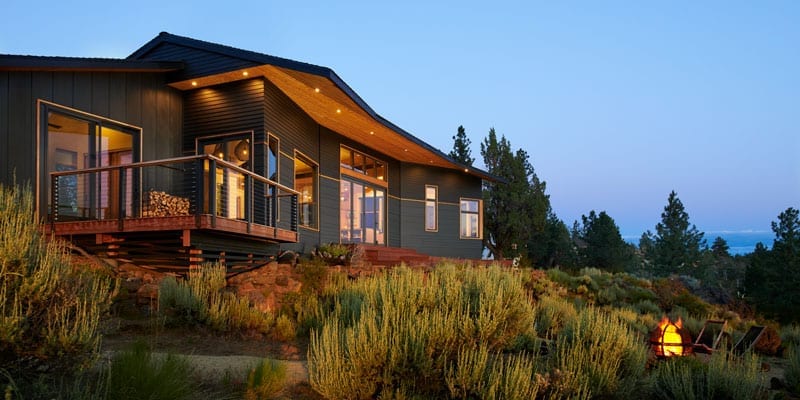 It’s hard not to notice the large lava rock boulder embedded in the concrete floor just inside the entryway of Glenn and Suzanne Walker’s home near Sisters. But at the same time, the rock blends into the new home the way it once blended into the land on which the property sits, overlooking a sage-hued meadow and gentle bend in Wychus Creek.

The rugged landscape is Central Oregon to the core, with majestic mountain views and abundant wildlife—including a resident Red-tailed Hawk that appeared each time designer and architect Wendy von Kalinowski visited the property. That hawk, in fact, became the inspiration for the project, with the floorplan of the modern home reflecting the outline of a hawk’s wing extended for flight and the design taking on the name, “Hawk’s Wing.”

It’s all just part of the vision of Studio von Kalinowski Design, a partnership with Wendy’s husband, master craftsman and builder Mark Smeltzer. The unique setting was a perfect match for the studio’s mission to work hand-in-hand with clients on creating a holistic design that brings daily inspiration to their lives. “Each project is a design journey and working with the Walkers became a creative collaboration of expressing the design concept all the way through in every detail,” von Kalinowski said.

Along with the lava boulders, the home’s interior is styled with raw materials and elements befitting the landscape. Custom pine planks milled into bench seats and bedroom side tables were both made from wood harvested on site. Hot rolled steel panels with matching flame effects, sculptural pendant lighting and built-in niches for personal treasures are unique and reflect the home’s surroundings. 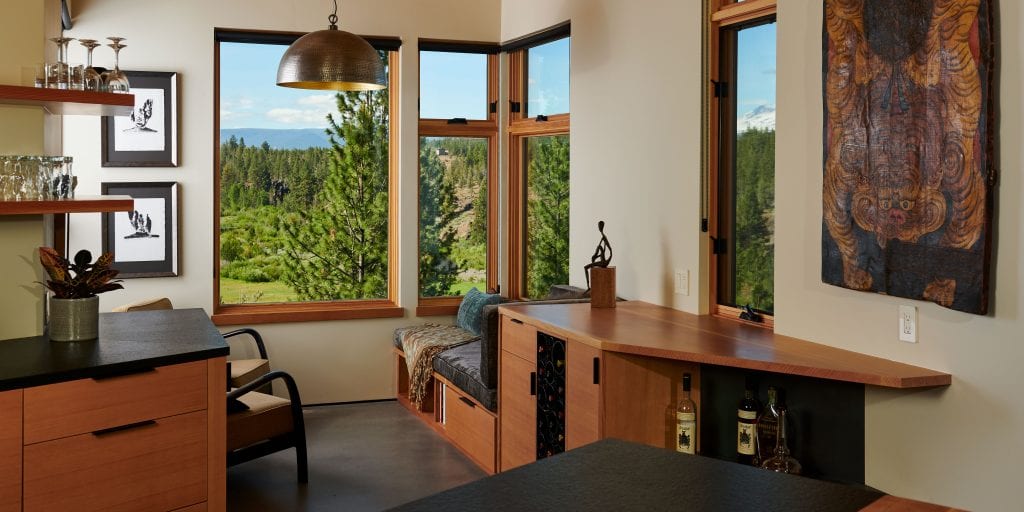 Massive, charred beams above the main living area represent the wings of that Red-tailed Hawk. “Wendy never stopped revisiting her ideas with us to be sure it was what we wanted,” Suzanne said. “The entire process was inclusive, and we so appreciated that—and her eye for detail—at every turn.”

The single-level home sits on a rimrock cliff overlooking Willow Springs Preserve, a 130-acre protected area along Wychus Creek managed by the Deschutes Land Trust. Views of the meadows and the mountains beyond dominate the living room, dining area and kitchen thanks to massive windows and bi-folding doors. With light pouring through every corner of the home, it’s as though the design brings the wilderness inside.

“We love the way our home captures the expansive views,” Suzanne said. “The careful placement of the windows frames the different peaks from the Three Sisters to Mt. Jefferson. It gives each living space its unique perspective.

The home is actually a little larger than the Walkers initially wanted, but von Kalinowski was able to create a coziness within the 2,700-square-foot layout. With a home office “wing” for Glenn, and dedicated spare bedroom for visitors, it serves the family’s desired multi-functional needs.

“My goal is always to design spaces that support, nurture and inspire those that will live in their home,” von Kalinowski said. “For me, this home captures not only the physical elements and aesthetics that define its unique setting, character and richness, but also the holistic side of my clients’ lifestyle.”

For the Walkers, yoga and meditation are central to that lifestyle so von Kalinowski designed a space in the master bedroom for yoga and a small, inviting alcove off the living room that doubles as an extra sleeping space. “We start every morning “sitting” together, be it in meditation or contemplation and study,” Suzanne said, “so we wanted a cozy east-facing sacred space where we could wake with the sun and welcome the day in our way.” 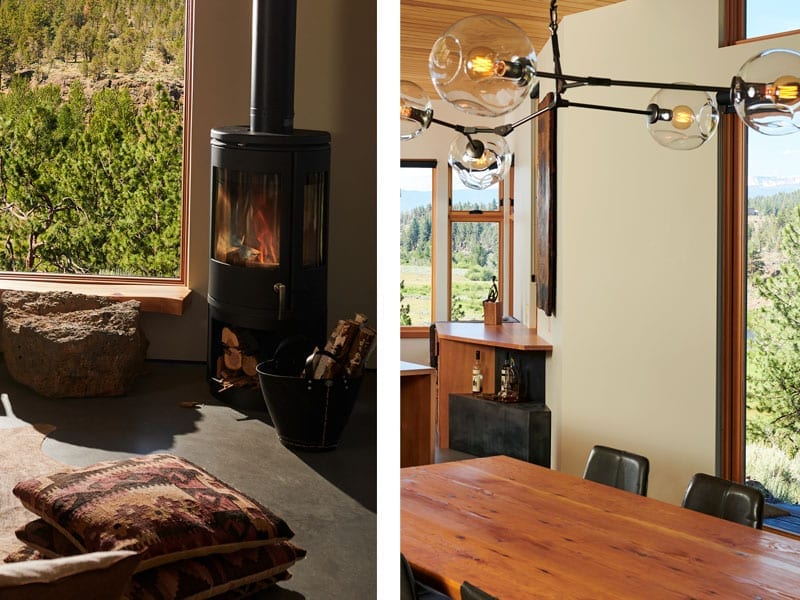 Glenn is also a musician. A separate music room showcases several of his beloved bass guitars and gives him a creative retreat of his own within the home.

Outside, the home is both striking and remarkably unassuming considering the exterior is much darker than the other homes in the area near Aspen Lakes Golf Course. von Kalinowski said the color palette for the home’s finishes are “all visible within the soft plumage of the hawk if one could get so close, but more easily found on the surface of the site itself.” The burnished color of lava rock, the soft grays of juniper trees, the charred charcoal color of trees once struck by lightning help the home once again both stand out and blend in.

Bryan Rhodes, the design team’s official “rock guru,” was able to create lava rock steps that look like they appeared naturally, leading from the wrap-around back deck to a pebbled sitting area and fire pit. Lava rock berms are extending arms from the rocky ridge, built up in front to add to the topography and create additional separation from the home to the road. And a septic system is virtually unnoticeable thanks to strategically placed trees and rocks.

The Walkers selected plant materials used both inside and out that were either native to the area or would further enhance the native landscape. “From plan to finish, the concept stays within the site’s natural elements that inhabit the immediate and surrounding environment,” von Kalinowski said. “The design focuses on the uniqueness of the property.”

Suzanne said the home turned out exactly as they hoped. “It’s challenging to explain and express what you dream your home to be,” Glenn said. “You use feelings and words that your designer has to interpret into physical spaces and Wendy did just that.” 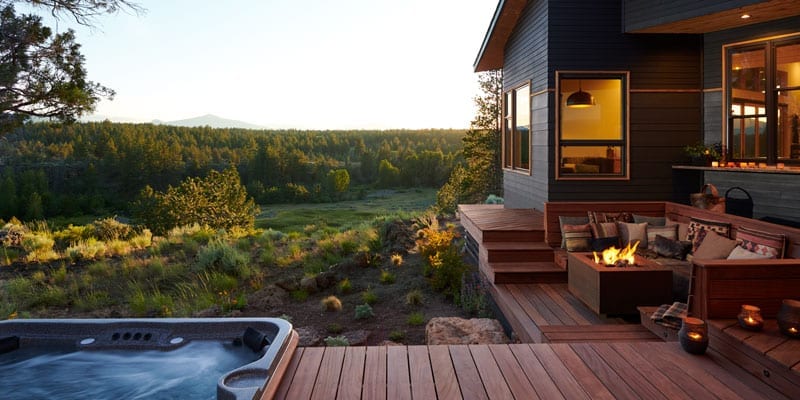