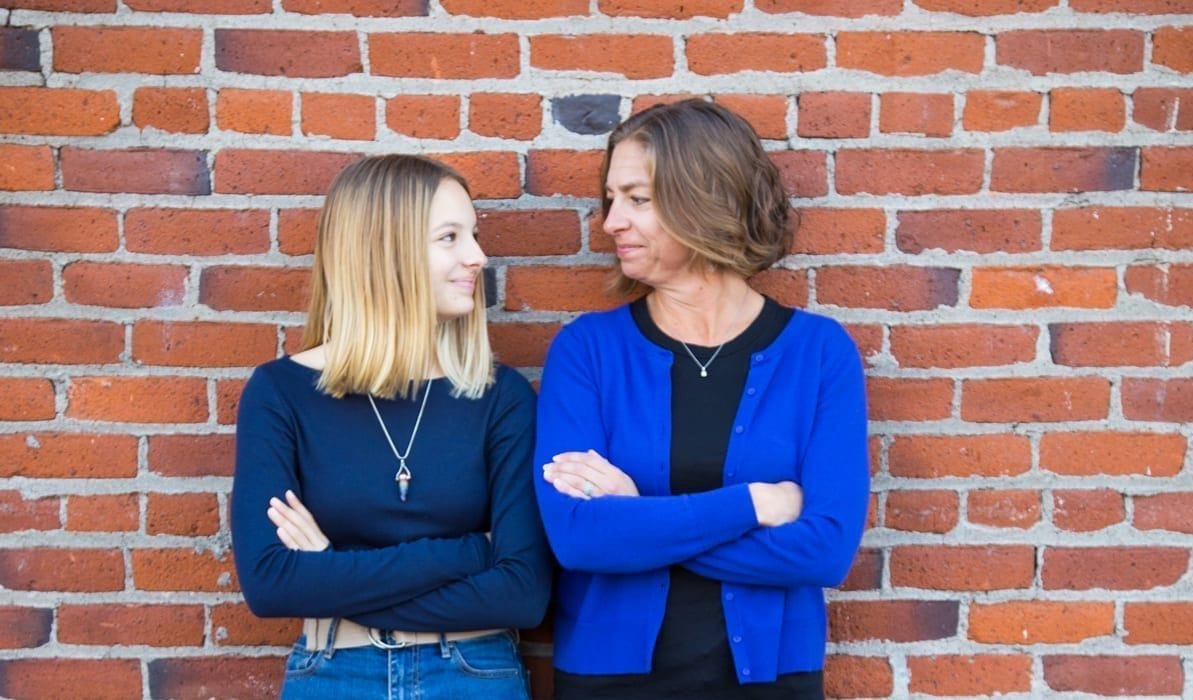 What was the inspiration to write a book together?

Libby: On a stormy night four years ago, I said to my mom, “What if weather patterns represented people changing?”
Kim: I scribbled what she’d said on a piece of paper. I knew at that moment we had to write a book together.

Kim: We began weekly brainstorming sessions at a sandwich shop in Bend while Libby’s little sister had dance class next door.
Libby: We did all the concepting and character development together, stealing names from family members and out of books on the sub shop book shelf. I loved creating people straight from scratch.
Kim: Then I began writing chapters and bringing them to Libby…
Libby: …and I would fix them!

What were the biggest challenges you faced?

Libby: Time. I had school, mom had work. We fit it in where we could, around activities and on the weekends.
Kim: Writing fiction was a blast but from the start, but really whipping a whole novel into shape was much harder than I expected. I had no idea what I was getting into. A third of our first draft ended up on the cutting room floor.

Tell us about your book’s setting.

Kim: The story takes place in a small rural town on the Oregon Coast, similar to where I grew up.
Libby: People who know Oregon will recognize a lot of familiar places, from the beach to Mount Hood.

What was it like to kill characters off on the page?

Kim: Delicate. I needed to kill five or six people without upsetting a young reader.
Libby: I said, ‘Mom, just kill ‘em’. I think we should have done more to upset the reader!

What impact did writing a book together have on your relationship?

Libby: We have the same type of mind and love dark humor, so it was easy to work together.
Kim: We are a lot alike and made a natural team. Writing is typically a solo sport, and it was wonderful to not be in it alone for the first time.

This project took four years. How did your perspectives change over that time period?

Kim: I started writing a book with a ten-year-old and finished writing it with a 14-year-old. That’s a period of life full of a lot of change. The story elements that mattered the most to Libby shifted over time.
Libby: Like romance.
Kim: There is debate about our protagonist. I think she has an innocent crush on the weather man.
Libby: She definitely does not!

Who is your favorite character?

What’s one thing that each of you learned about the other through the book writing process that you might not otherwise have known?

Kim: I knew Libby had a rich imagination and loved storytelling, but I didn’t realize the depth of plotting and character that she could bring to a project.
Libby: When my mom starts writing something she will not stop until she’s happy with it.

What are readers most enjoying about The Sixth Storm?

Libby: Fast pace, fun mystery, a brave female lead, and my friends say they can really relate to the characters.
Kim: The second half is a page turner, and there is a delicious plot twist at the end.

Will there be another book from you two?

Kim: This has been so much fun, but I am tempted to turn the reins of fiction over to Libby for the long haul.
Libby: I guess we’ll just have to wait and see!