You are here: Home / Home / Life on the Edge 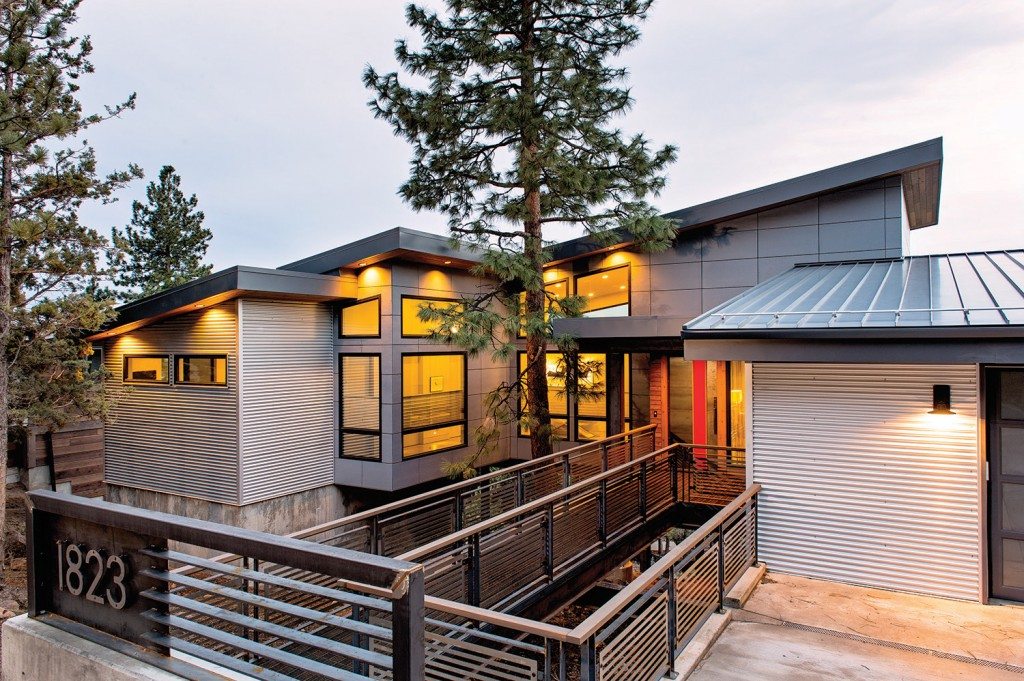 A distinctive modern structure juxtaposes elements, and blends into its steep,
rocky  perch in Bend, appearing as if it landed there.

Dan Slape of Bend frequently talks to passersby in his West Hills neighborhood. That’s because of his house.

The distinctive modern structure, home to Slape and his wife, Debbie Benson, is a juxtaposition of wood, cement, metal and glass angles which blends into its site. “We just wanted it to look like it landed here, and we wanted to maintain the integrity of the site,” said Benson. Another more practical priority was that the couple did not want a lawn or to even own a mower.

The challenge for friend and Bend-based architect Neal Huston was to design the home with only one story. Huston used stilts to perch the house on its steep, rocky site. A catwalk takes friends and visitors from the street level to the front door, a wood-and-steel design by Huston, which accents a tree nearby where Slape proposed to Benson.

Huston continued using the exterior architectural materials on the interior, with cement floors, metal beams and raw-edge wood counters in a half-bath and as an accent to the island.

“I really wanted the look of an industrial loft here in Bend,” explained Slape, who grew up in Prineville but lived for many years in the eastern U.S. And Benson agreed, though at times she asked him to take it down a notch or two. “I always think of the eventual resale value,” said Benson, who is a real estate agent.

The home’s tree-house-like feel is enhanced by twenty-foot- high ceilings and south facing, floor-to-ceiling windows that look out over Bend. Its layout is as mindful of the views outside as it is of the flow of rooms inside. The master bedroom is situated to one side of the combination living, dining and kitchen area to provide privacy and take advantage of the view.

“We didn’t realize it when we were building the house, but we can also see the Old Mill and the river,” said Benson. “That was a happy surprise.” On the other side of the public areas are two guestrooms and a bathroom. The only room that does not look out over the city is a guest room used as a home office.

Once settled on the layout of the 2,400-square-foot home, Slape and Benson enlisted the help of interior designer Carol Gregg and spent evenings searching online for design elements they wanted in their home. One of their first purchases was a yellow-green and pink rug for the living area to add color to the otherwise neutral palette. Pink turns up again in a master bathroom lighting fixture, and the yellow appears in the kitchen’s upper cabinets and the knobs on the stove.

Combined with the playful touches are clever interpretations of functional elements such as corner drawers in the kitchen cabinetry, frosted glass in the master bath to allow for natural light while providing privacy, a fireplace that doubles as a defining line between the living and dining areas without obstructing the view, and a wall of windows that folds back upon itself for egress to the deck.

The couple agrees that the house turned out to be exactly what they wanted, in exactly the right spot. Despite Benson’s attention to resale value, both agree that Huston also designed a home that they will never have to sell. “There is not a stair here, and we can ‘age in place,’ ” said Benson. “We’ll never have to leave.” 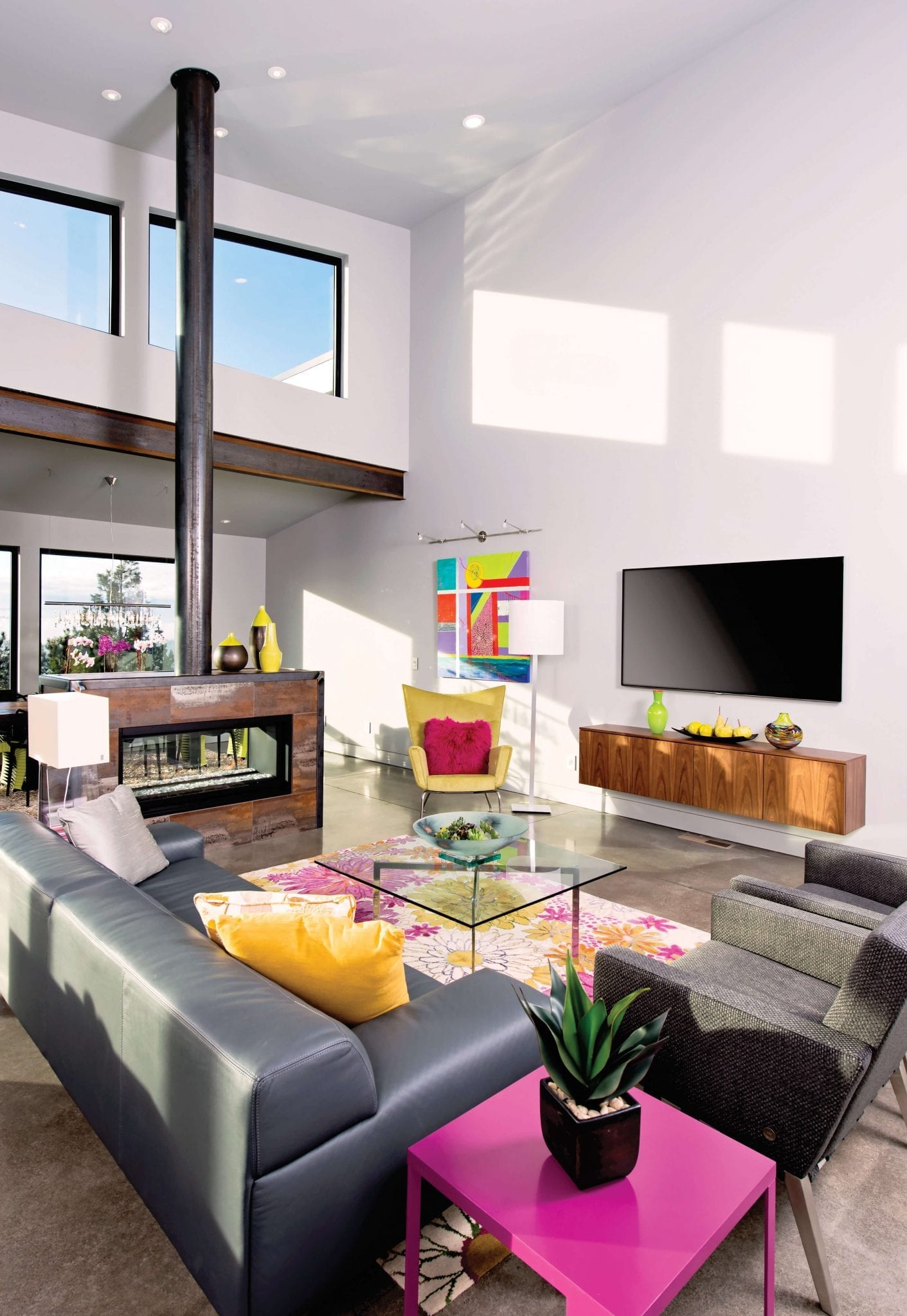 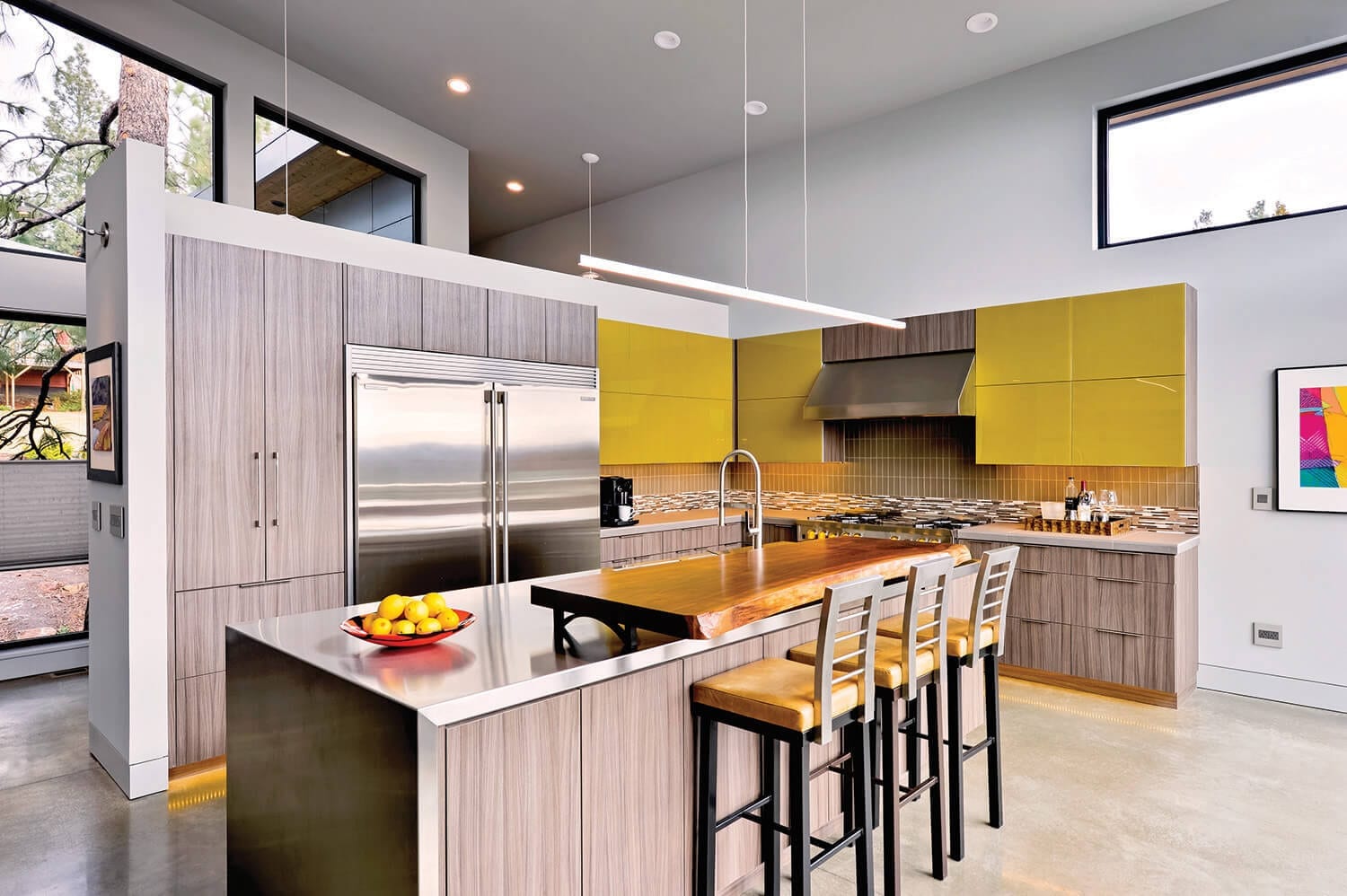 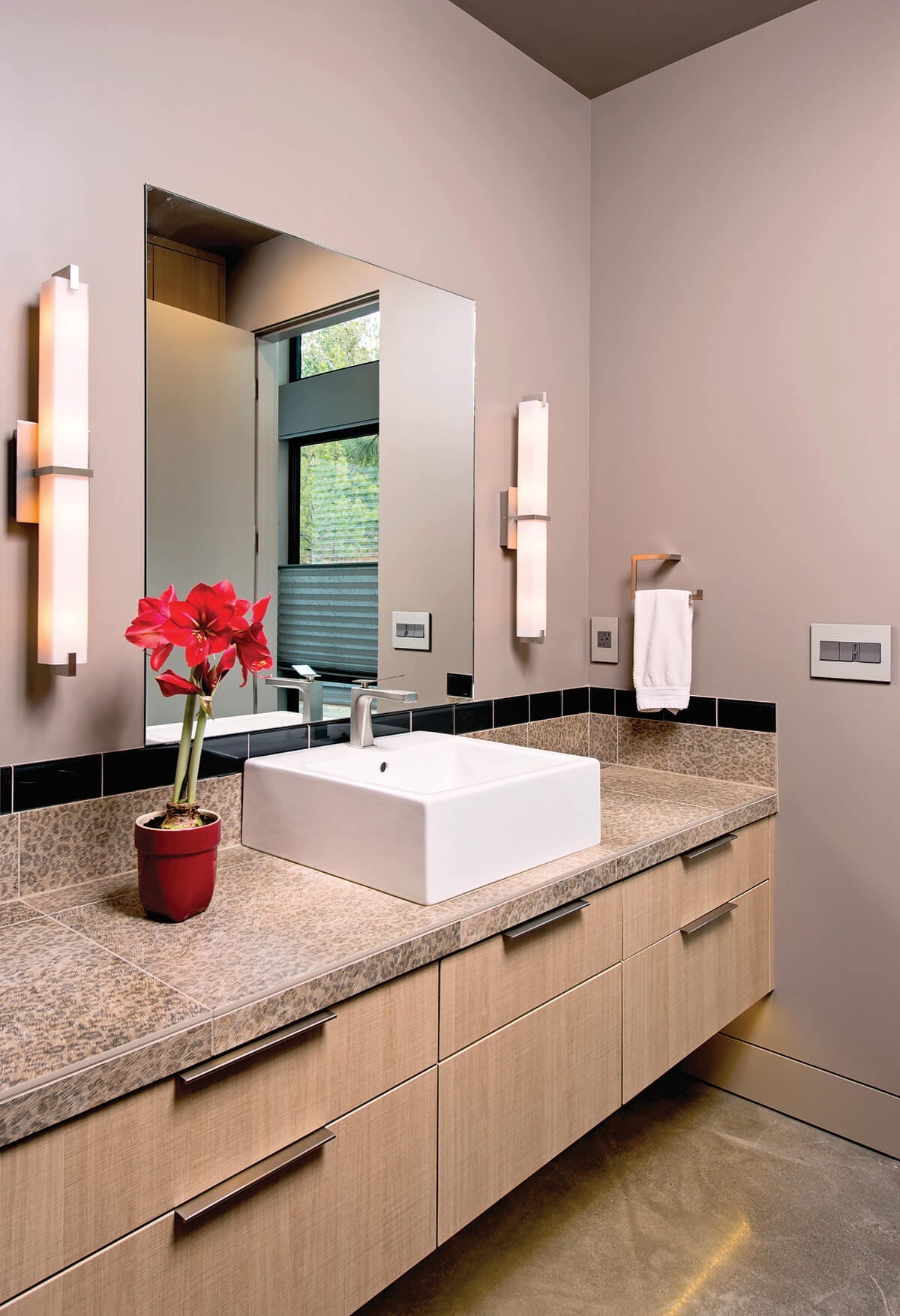 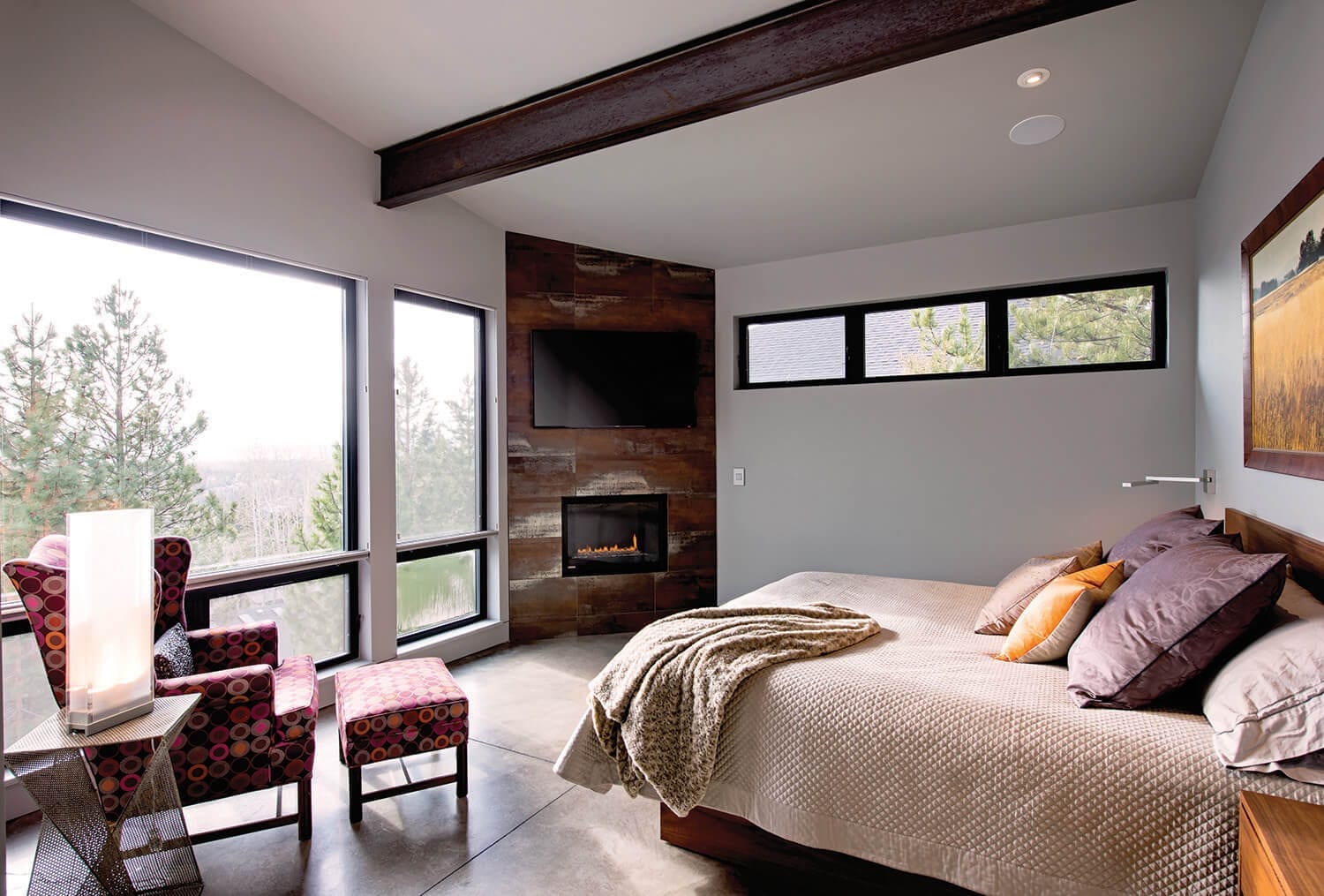 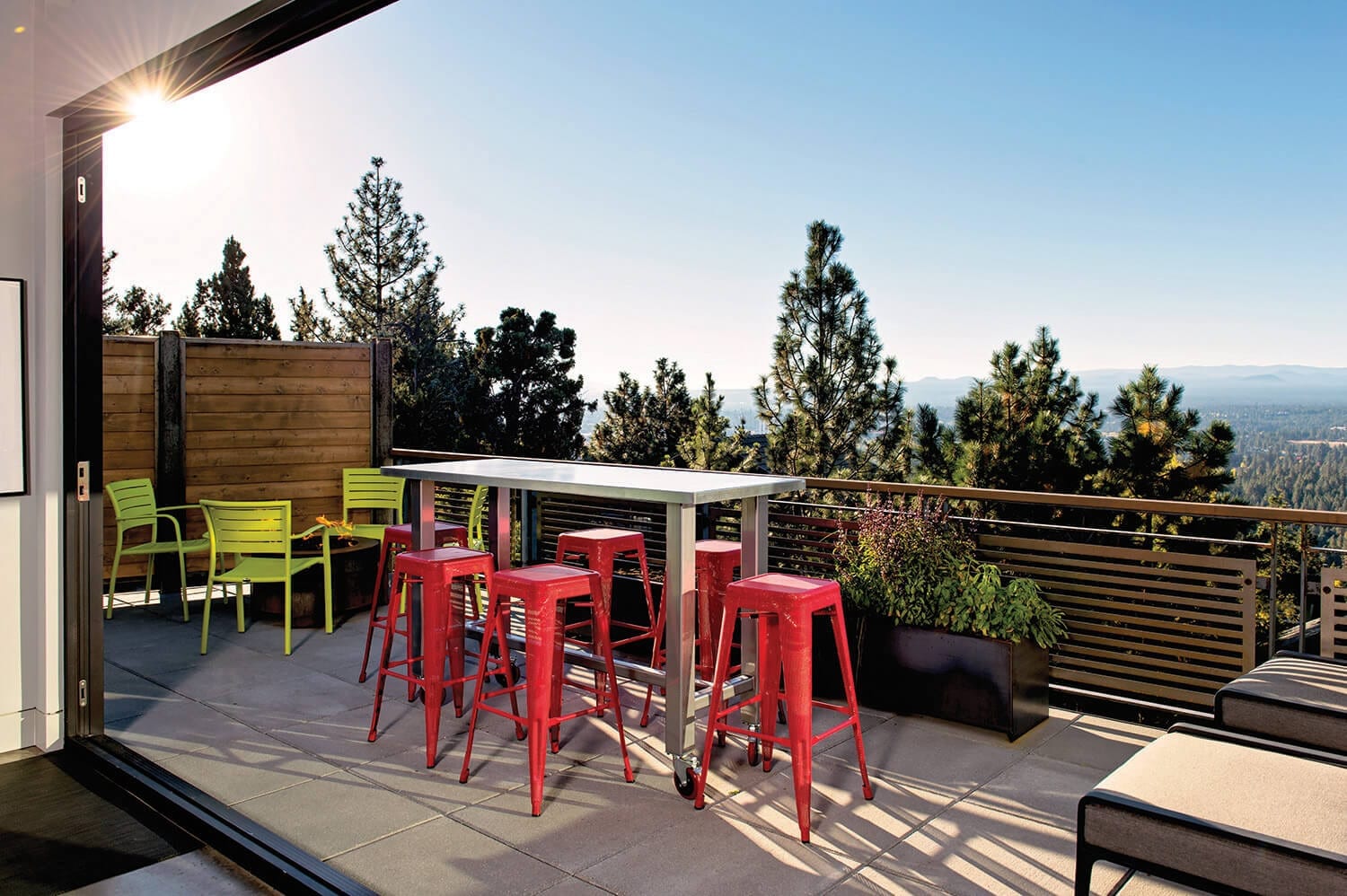 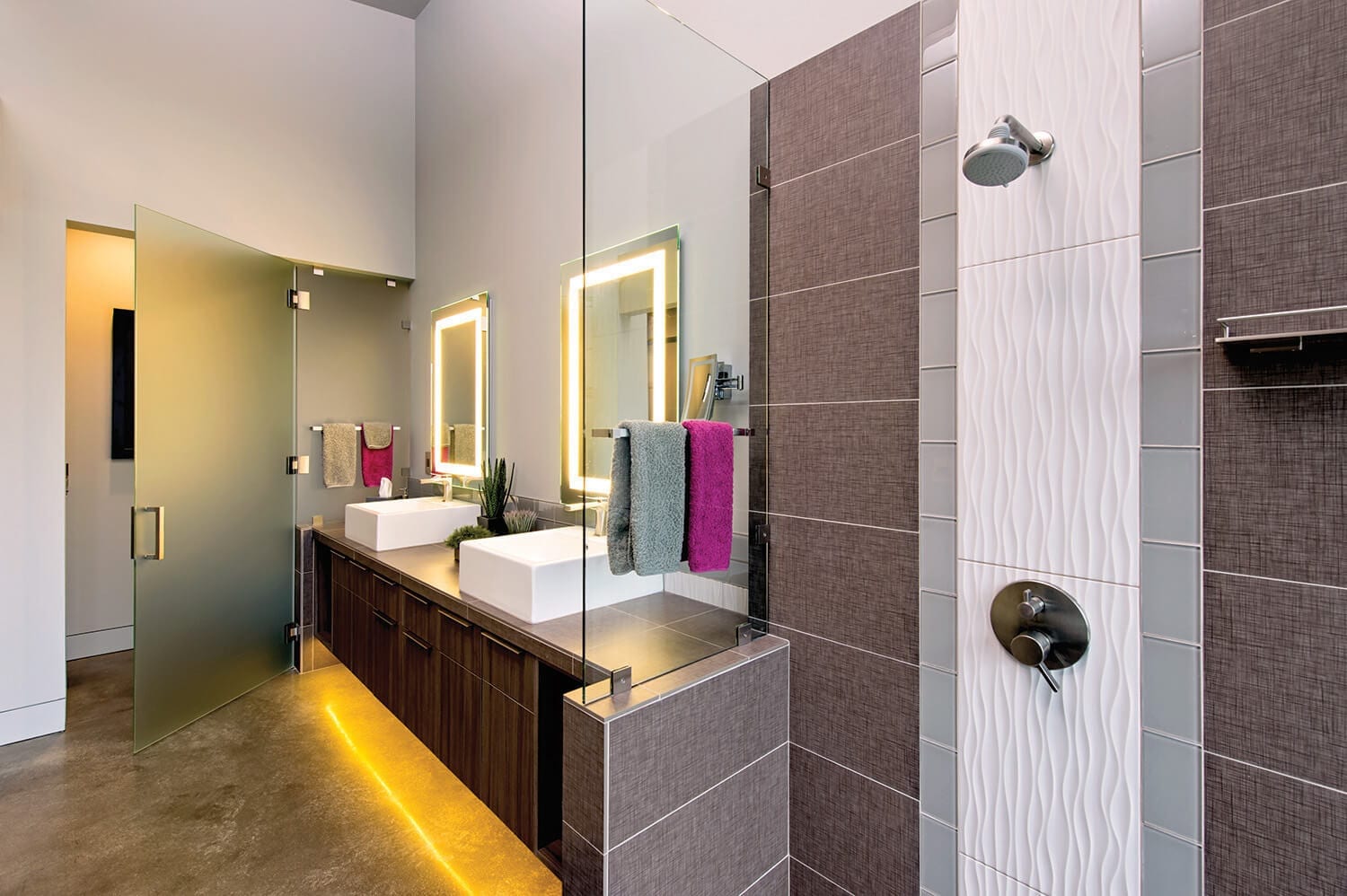 Share This Article
« Family Pass(times)
A Mosaic of Care »