You are here: Home / Home / A DIY Home Renovation in Maupin

A Bend couple decides to retreat to the little town on the Deschutes River and renovate a century-old home. 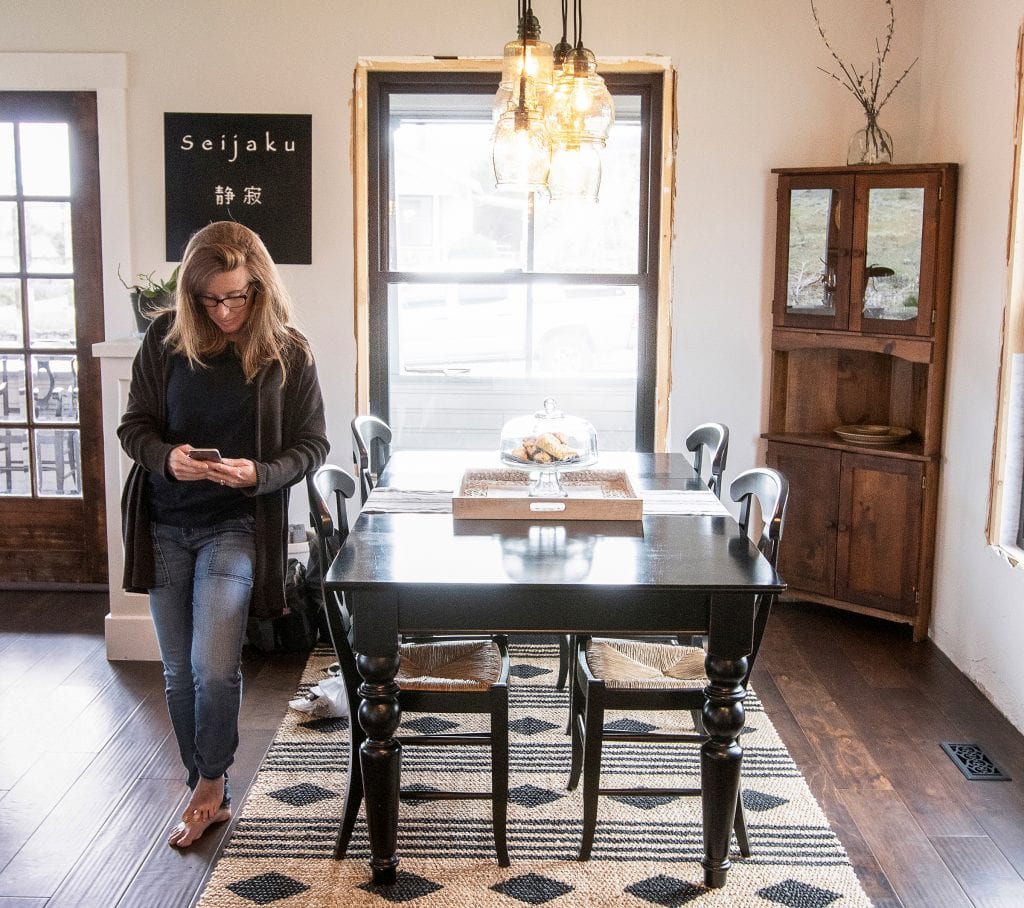 Kyle Suenaga in her Maupin home.

The first thing Kyle Suenaga noticed when she walked in the house was that it smelled 100 years old. Not that it was a bad thing. Just that it smelled like this house, on the corner of a Maupin neighborhood that overlooks the Deschutes River, had 100 years of life in its floors and walls, which it did, and just needed some TLC.

Kyle discovered Maupin a decade ago when she took her two sons on a rafting trip for the weekend. After that, they started visiting year-round to retreat from the Bend area. “We’d just come up here to unplug. No cell phone reception, no TV. It was awesome,” said Kyle.

That’s changed in the past decade. Today, Maupin not only has cell phone reception but also high-speed internet, which makes living there full-time a much easier transition for people like Kyle and her husband, Stan, who spent the majority of their lives in cities. By way of contrast there are about 430 full-time residents in Maupin, though the population booms to a couple thousand in the summer, with seasonal residents and tourists drawn to the world-class rafting and fishing. 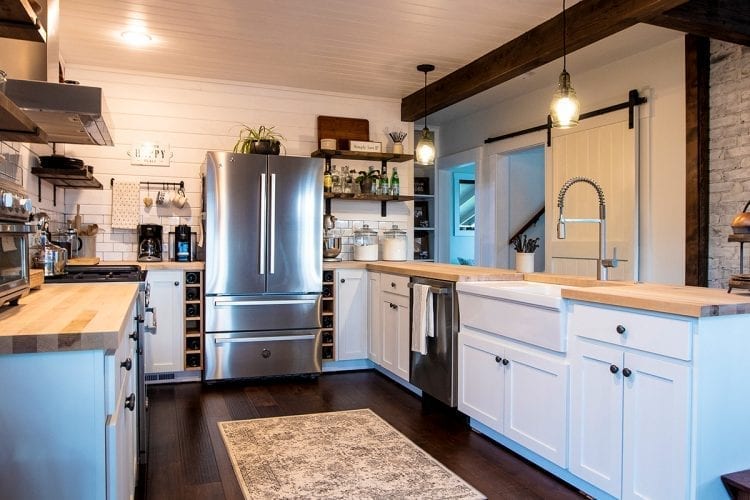 The kitchen was the first room to get a full makeover in the century-old home.

Last year, the Suenagas were living in Bend but wanted a change of pace; Maupin fit the bill. When the century-old grey house on the corner came up for sale, they took the leap and decided to take on the fixer upper themselves.

“We moved in on a Friday and Saturday and started ripping up carpets on Sunday,” said Kyle. The asbestos abatement and roofer came on Monday. Kyle kept her job as an English teacher at Mountain View High School until the end of the school year, and Stan retired from his work for the government. By the summer, every day was devoted to renovating the house.

“Every single day was a project—that usually took three days longer than I thought,” said Kyle. “They make it look so easy on DIY shows.” (The modern farmhouse style popularized by HGTV’s Joanna Gaines is prominent throughout the remodel, replete with white shiplap on the walls.) “We tried to do it systematically, and then it ended up that everything was torn apart. And we’re still married,” said Kyle with a laugh.

While they were sledgehammering the lath and plaster walls and replacing the white shag carpet with hardwood floors and tile, they slept on cots on the screened-in front porch and cooked on the back patio throughout the summer. They didn’t have electricity for months; extension cords ran the coffeepot and fans—the latter of which is a necessity during Maupin summers that consistently hit three digits. 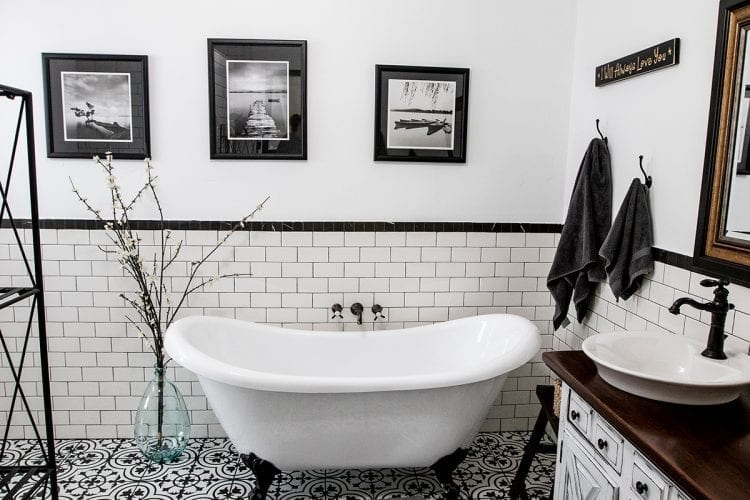 They tackled the kitchen first. The couple took down two walls, which opened up the front of the house. Butcher-block counters and white cabinets replaced the dated laminate and plywood and provide a modern farmhouse look. The trendy open shelving was also practical for Kyle, who said that she’s too short to reach upper cabinets. The backsplash is a white subway tile with black grout, which Kyle learned probably should have been done after the house’s siding was replaced. (The pounding damaged the fresh grout, which had to be redone.)

Each home renovation comes with a unique set of challenges, particularly when it’s being done in a rural area.

Kyle described the process of getting subcontractors to Maupin as “hell.” It took months to get a plumber and an electrician to the house, and the couple decided to forgo gutters when they still couldn’t find someone to install them. Most of the wait is because of booming construction in The Gorge and Central Oregon has delayed subcontractors. So they learned to do a lot themselves and relied on the help of some family and friendly neighbors. One night while eating at The Riverside restaurant in Maupin, they were talking about needing to patch some cement in their walkway. A construction worker who was in town to work on Maupin’s new civic center offered to lend supplies and a hand. 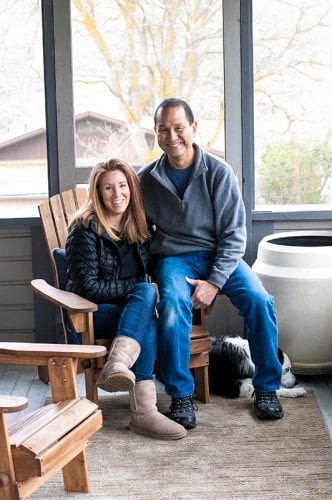 Kyle and Stan on the porch where they temporarily resided during the peak of the remodel process.

Make it Your Own

Charming quirks appear around every corner. In the living room, Kyle found a patch of brick on a wall and decided to expose it. Turns out, it was just leftover from an old fireplace. But that corner of brick remains, and she whitewashed it as an accent.

“Our mantra is, ‘It’s a 100-year-old house.’ We’re going for rustic,” said Kyle. “Not perfect,” added Stan. “Doing the work yourself, we just stumbled through it. You spend a lot of time on it, you call it good.”

There are two bathrooms on the main floor, one that had been remodeled by the previous owners, and the other was without a toilet. They kept it as a bathroom anyway, adding a clawfoot tub, standalone shower and embracing the idiosyncrasy of a bathroom without a toilet.

A sliding barn door now opens to the stairwell. Upstairs, a landing area has a powder room tucked in an alcove. That was a remnant of the house’s previous life as Maupin City Hall. Kyle learned that at some point, the original city hall burned to the ground, and the city officials turned this house into city headquarters. The three bedrooms upstairs had been used for offices.

They’re still waiting for new trim for the windows and need to install doors upstairs. They haven’t done much to the exterior yet, which will be tackled next. They’re eager to get started, but then again this is Maupin. And they didn’t come here to rush.