You are here: Home / Culture / Justyn Livingston Finds Art and Meaning in the Mystery of Glazing Tile

After more than a decade glazing tile, it’s still a mystery to Bend tile artisan Justyn Livingston. But to her, that’s part of the art. 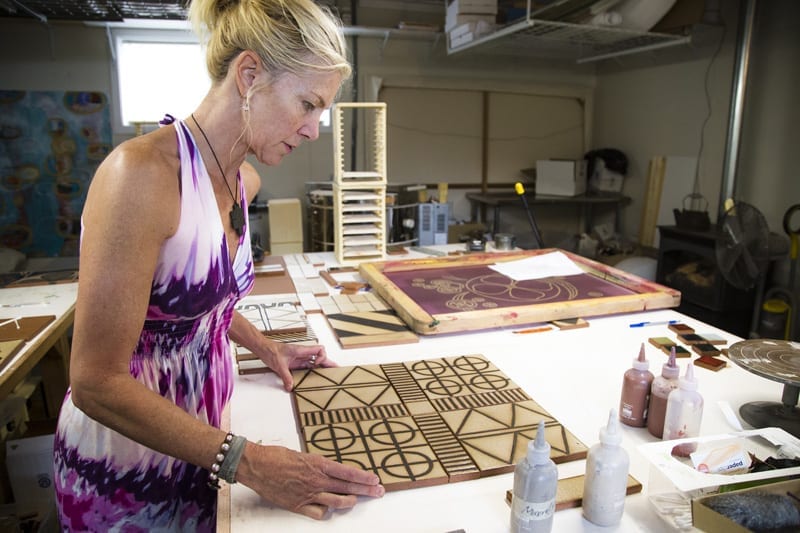 Justyn Livingston lays out tile in her Bend studio.

There’s an aspect of unpredictability to glazing tile. Variations in the clay can reveal a gradient of colors that come out differently each time they’re fired. After more than a decade glazing tile, it’s still a mystery to Bend tile artisan Justyn Livingston. But to her, that’s part of the art. Predictability doesn’t really suit Livingston, anyway. Her career has taken her from international fashion houses in San Francisco to rural villages in Romania and, eventually, Central Oregon.

Bendites and visitors may recognize her work from the soaking pools at McMenamins Old St. Francis School, where she designed the tiles in the style of a Budapest bathhouse. Her craft, under the name Metolius Ridge Tile, is featured in commercial properties and private homes. 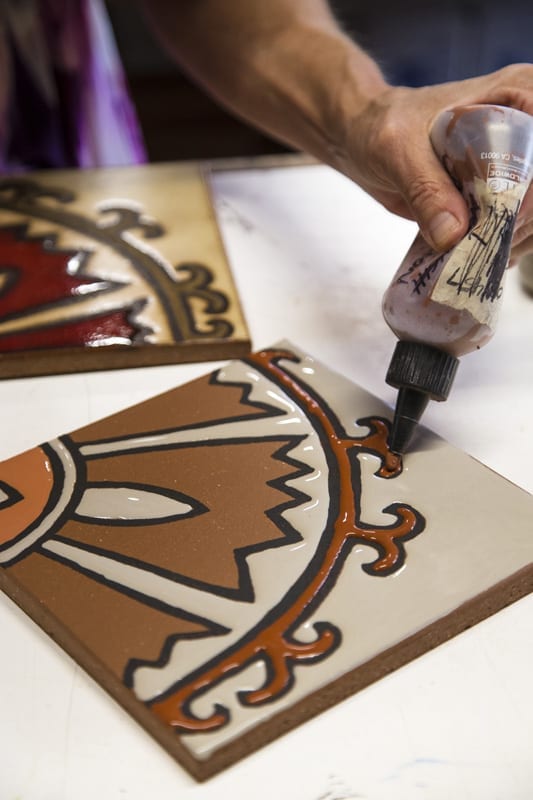 “My intention for this is to choose something [my clients] are going to love for a lifetime,” she said. “While I pay attention to trends and fashion and stuff in a way, I hope that this comes off as really classic.”

In the case of McMenamins’ Bend soaking pool, Livingston said the highest compliment she received about the project is that it feels old; she aims for her tile work to be long lasting and sustainable.

The irony is that Livingston was previously a textile designer for the international fashion brand Esprit, where trends and fast fashion were the modus operandi. She landed at Esprit in San Francisco in the early 1980s, after leaving home at 16 and then living in Paris for a year teaching ice skating at 19 and making her way back to the Bay Area in her twenties.

Livingston eventually became the head of the textile design department at Esprit, where she designed textiles for all the company’s products, including men’s and women’s clothes and bedding. A combination of burnout, freelance opportunities and lower living costs brought her to Camp Sherman in the 1990s. She was able to freelance for Esprit and Pottery Barn and made ends meet by working at the Kokanee Café.

Then, Livingston was recruited to work as a design consultant for Aid to Artisans. Her first job with them was in Tonga, working with basket weavers. The work took her around the world throughout the decade. She worked in Mexico, Romania, Guatemala and Chile to help indigenous artisans continue their traditional craft in a way that was sustainable and profitable in the modern economy.

Back in Central Oregon, she started working with clay and tile and collaborated with Susanne Redfield of Kibak Tile in Sisters. The collaboration was the jumping off point for Livingston to pursue her own business, Metolius Ridge Tile. In 2004, she landed the McMenamins gig that has served as a springboard. 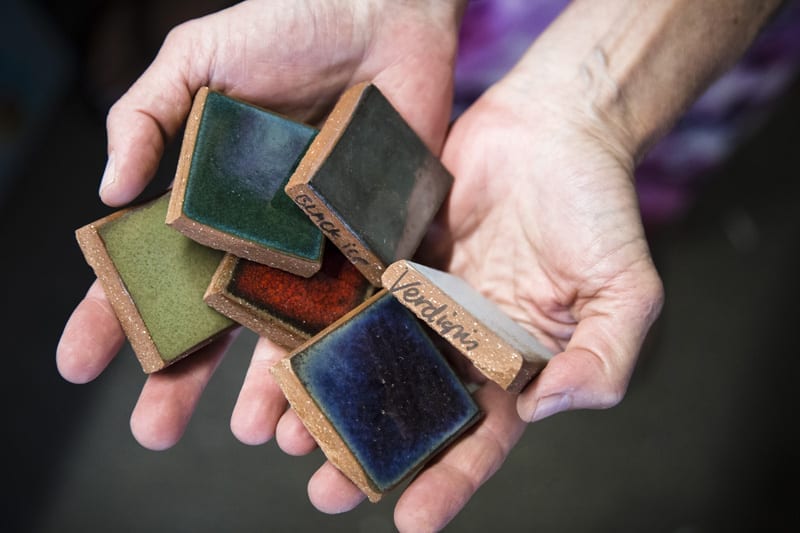 From her studio in Bend, she cuts the tile, hand glazes each piece and fires them in her kiln. She uses only red quarry tile because “it enlivens glazes like no other color,” she said. “Because of the minerals in the quarry, it has this sort of chemistry, this alchemy, with the glazes, which is mostly fabulous, sometimes unpredictable.”

The unpredictability is a key element in her work that makes it stand out in a sea of assembly-line products. She aims to create an overall product where each tile pattern looks the same, but not manufactured.

“One of the biggest challenges is creating consistent inconsistency,” she said. “That’s part of the beauty, right?”