You are here: Home / Home / Every Room In This House Has A Stunning View

Set into an outcropping above the Deschutes River as it tumbles through Tumalo, a modern home is built on the foundations of principles, patience and respect. 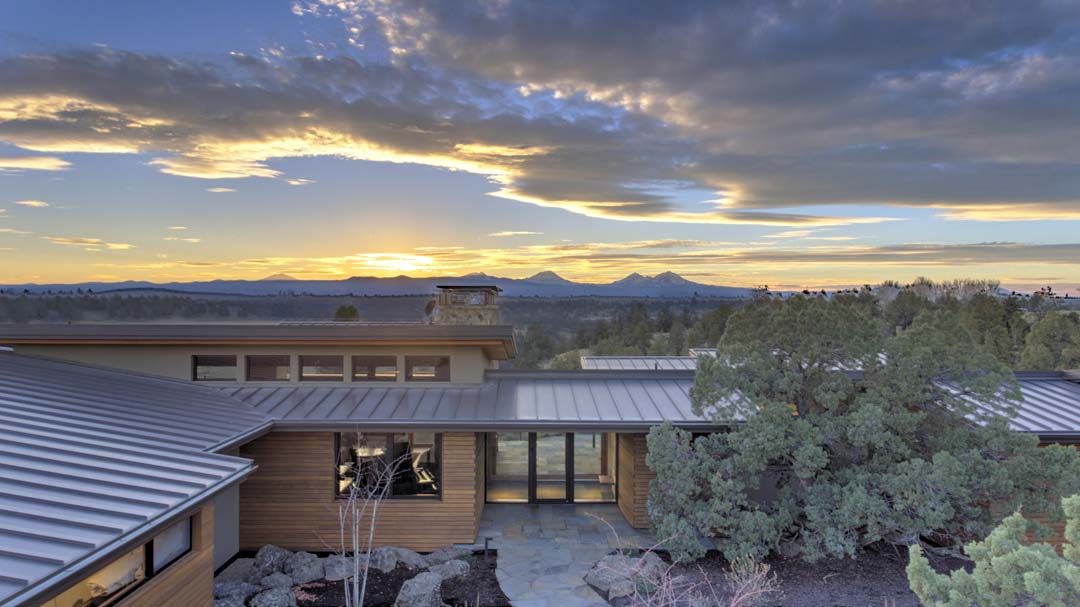 Rare are the buildable sites in Central Oregon where one can see both the river and the Cascades. The challenge for principal architect Nathan Good and lead architect Lydia Peters of Nathan Good Architects was to design a home that not only took advantage of the views without disturbing nary a rock or tree, but also addressed the homeowners’ criteria in aesthetic design, self-sufficiency and environmental impact, as well as in human factors, including aging in place and universal design.

“Site dictated the design,” said Good of the slim band where the home sits with its mandated river and mountain views. “It was challenging to design a building that could be woven around ghost juniper trees, boulders and other features.”

Working with builder Dennis Szigeti of Leader Builders and a team of landscape experts and subcontractors, Good and Peters set about fulfilling the homeowners’ wishes in a four-year-long project.

Surrounded by stone patios and wrapped in natural stone, plaster and locally sourced wood, the low-slung home is visually tied to its surroundings. It also boasts an abundant use of glass to permit views from the house, through the house and, even from the front walk, over the house. 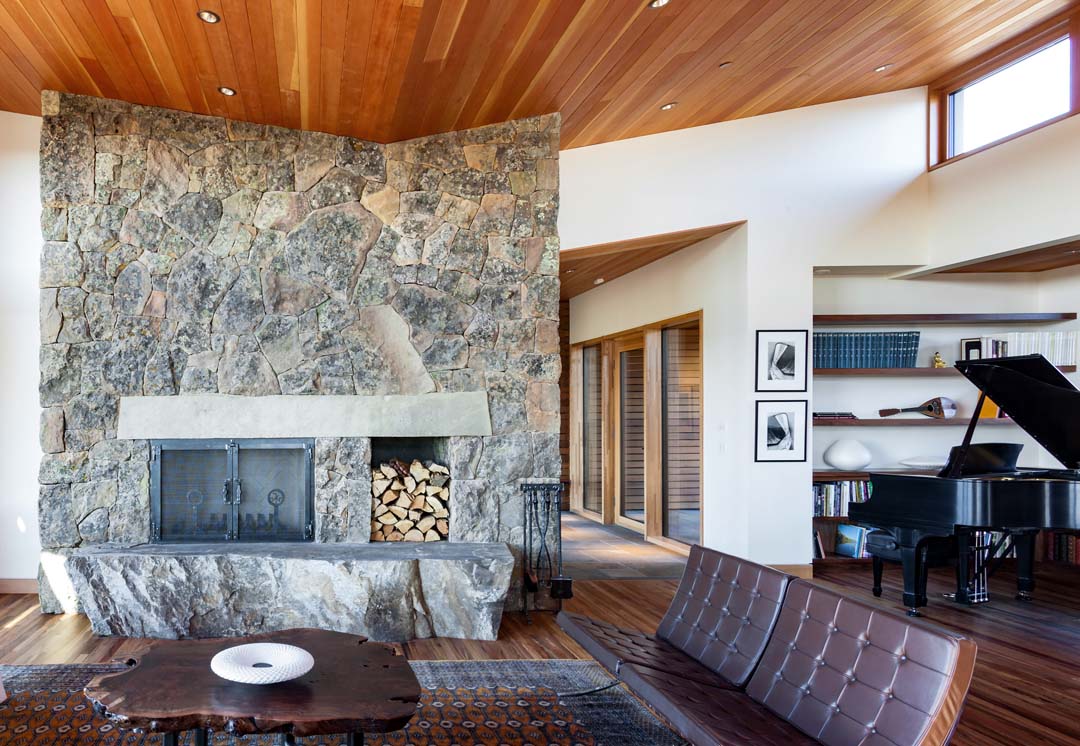 Named Kalorama (from the Greek for beautiful vista) by the homeowners, the finished structure is formed in deliberate zones to delineate the home’s public spaces and private areas. To the left of the main entry sits the great room, the center of the 4,000-square-foot house. Anchored by a massive wood-burning fireplace set on a single raised hearthstone, the spacious area accommodates a welcoming seating arrangement, an expansive dining table, a music area with grand piano and a large open kitchen—all of which have views of the Cascades. (Only one room in the house is viewless, pointed out builder Szigeti, and that’s the wine cellar.)

Meeting the couple’s request that materials be sustainable and welcoming are a fir ceiling, fishtail oak floors made from repurposed shipping containers, a wood, live-edge dining table, frames of European larch wrapped around triple-pane windows and cherry wood kitchen cabinetry. The further use of wood in the floating shelves near the piano and in the bookshelves that form a pony wall by the staircase leading downstairs reinforce the space’s welcoming warmth.

Strategically positioned by the kitchen are a pantry, a mudroom (complete with a dog shower) with access to the garage and a solarium/greenhouse where the couple can grow small fruit trees, flowers and vegetables. (Cold frames are conveniently set just outside.)

Also by the kitchen is an elevator installed to accommodate guests who cannot use stairs and to ensure accessibility for the homeowners as they age in place. 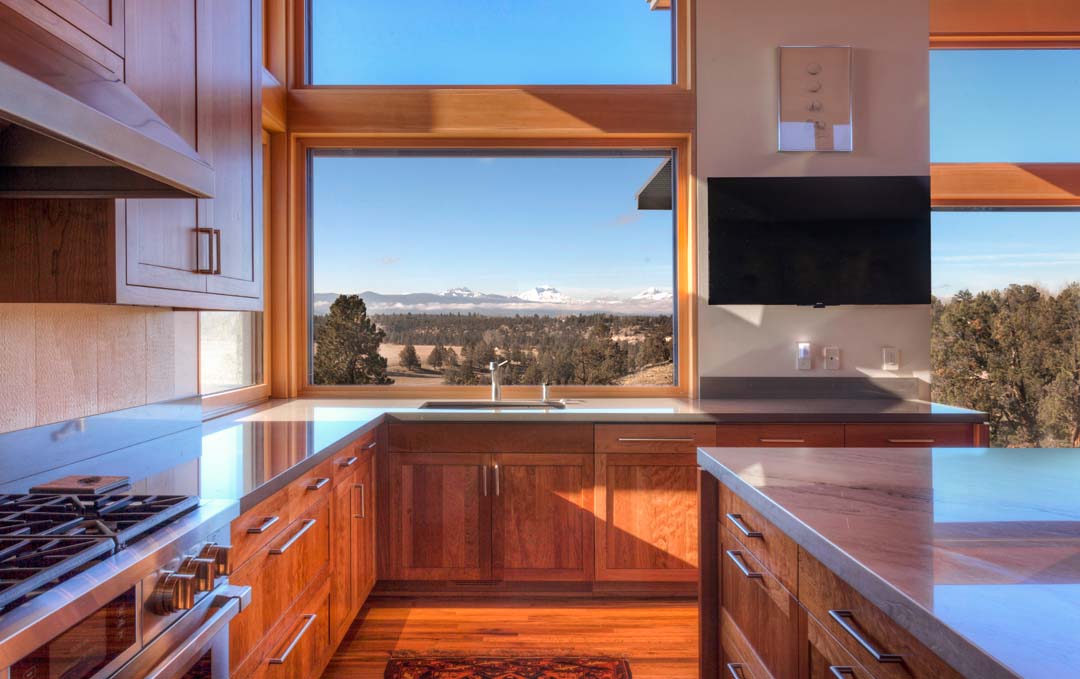 Upstairs and on the other side of the front entry is the homeowners’ sanctuary. Separated from the public space by a wood pocket door, a hall gallery of wood bookshelves and storage drawers face two offices that look toward the mountains. The offices’ shared wall is also a sound barrier to suit the working styles of the wife who wants perfect quiet and her husband who wants to play music. Past the offices and per the couple’s instructions, the bedroom was created as a simple sleeping space with a nearby laundry room, spacious closet and master bath.

Throughout the home, the use of common materials such as wood and stone, fittings such as bookcases, and design features such as live edges, chevrons and the home’s Kalorama logo provide visual unity.

Chief among the couple’s wishes was a sustainable and self-sufficient home that could be a harbor in all conditions. “There are eighty-four solar panels on the roof to provide power,” explained Peters. Other practical features such as LED lighting, exterior solar shades, an EV car charging station and connecting the solar panels to Tesla Powerwalls helped the all-electric LEED platinum home garner an energy performance score of zero. Elsewhere on the property, a HAM radio tower, potable water cistern and orchard ensure self-sufficiency.

With retirement in view, the homeowners made aging in place and universal design a priority. In addition to the elevator, doorways are thirty-six inches wide to accommodate wheelchairs. Intentional design decisions, such as zero threshold showers and grab bars in the bathrooms, ergonomic door and cabinet hardware and abundant lighting (even in the closet rods), were made throughout the house to ensure the couple will continue to successfully live in their home. 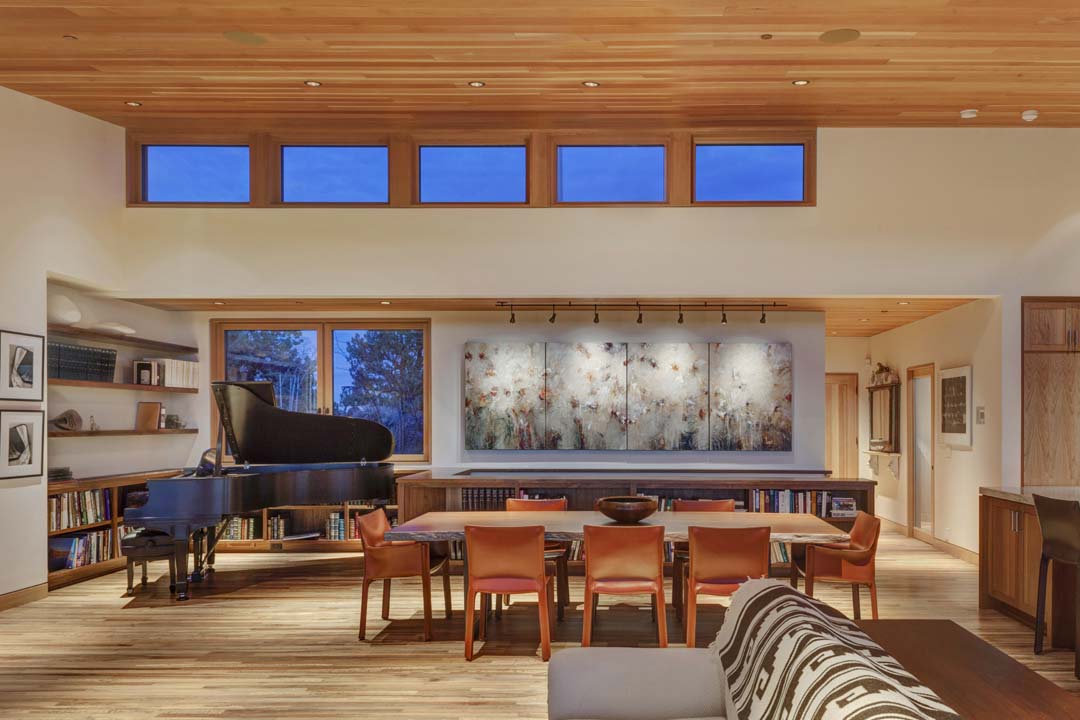 The project was not without bumps. While the lot had been purchased in 2008, the homeowners decided to put construction on hold for two years during the recession. It was a break that became serendipitous because much of the technology used in the completed home, such as the Tesla Powerwalls, had yet to be invented when the project first started. And, pointed out Good and Peters, the interval was also a testament to the couple’s dedication to their original vision because there were few changes when the project started anew.

Builder Szigeti credits the relationship between the architects, the homeowners and all the other professionals and subcontractors to the project’s success. “Everyone listened, everyone was respectful of everyone else,” he explained. “All the subcontractors who started with the project finished with it, too. Everyone felt valued.”