You are here: Home / Culture / Mural of Influential Musicians Steals the Show at Silver Moon Brewing 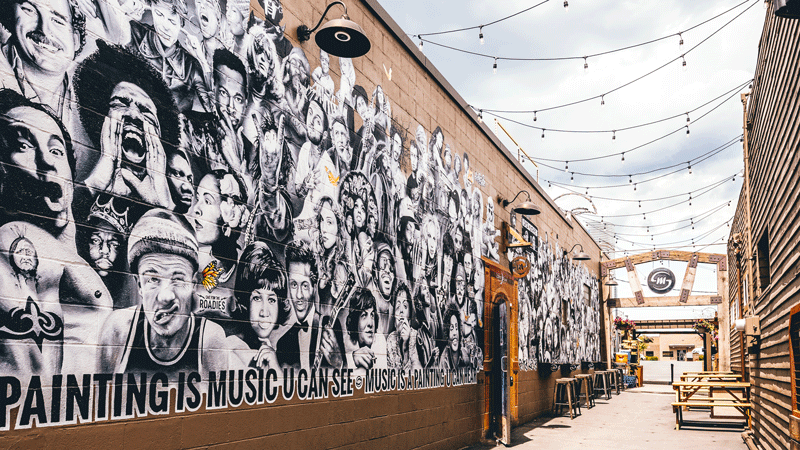 Fast forward to 2019, and Hoogen had built relationships with James Watts and Matt Barrett, who took over Silver Moon Brewing in 2013. Meanwhile, the city had loosened the mural code; Hoogen’s vision was ready to become reality. 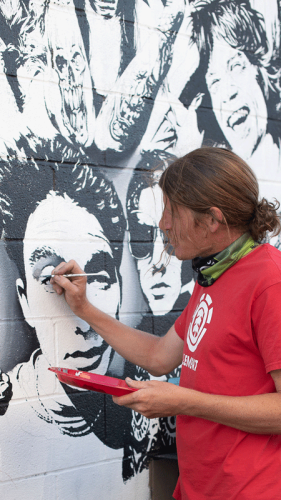 “They lifted the ordinance and right away when [Watts and Barrett] got the news, they said, ‘I know who we want to paint our mural’,” said Hoogen. “I had planted those seeds years earlier, but destiny knew that I was going to paint a mural in that alley.”

The alleyway now displays Hoogen’s “SMB Mixtape” with Side A and Side B: a monochrome compilation of portraits of ninety-nine famous musicians in remarkable realism, chosen so observers could find their favorite musician and appreciate the mural from their own perspective. Over four-month stints during the past two summers, Hoogen spent most of his time in the alleyway, drinking beer and painting. Typically, being an artist can be reclusive work, but Hoogen joked how often he’d hear an “excuse me,” followed by a request, or demand, naming the next artist he should paint. Often, he agreed.

Hoogen’s work was inspired by musicians and their ability to create common ground and unity between people. This was his criteria behind each idol he painted, including Bob Marley, Peter Tosh of The Wailers and Dolly Parton. “You think about these artists, about what they did. You think about their music and about how everyone’s together, and you’re looking at beautiful human beings from all races and nationalities,” said Hoogen. “Everybody thinks they’re looking at music, but what you’re looking at really is the human race coming together—unity and positivity and love and rhythm to the people.”

When Hoogen decided on the mural theme, Watts and Barrett were quickly on board. Given Silver Moon’s rapidly growing music scene, painting ninety-nine of the greatest musicians of all time was relevant, said Watts. He and Barrett were immensely supportive through the painting process, providing Hoogen with living space, paying for his gas and expenses and offering an open bar along with a generous paycheck. They even welcomed Hoogen’s dog, Bubba, who has since passed but can be found in the mural. 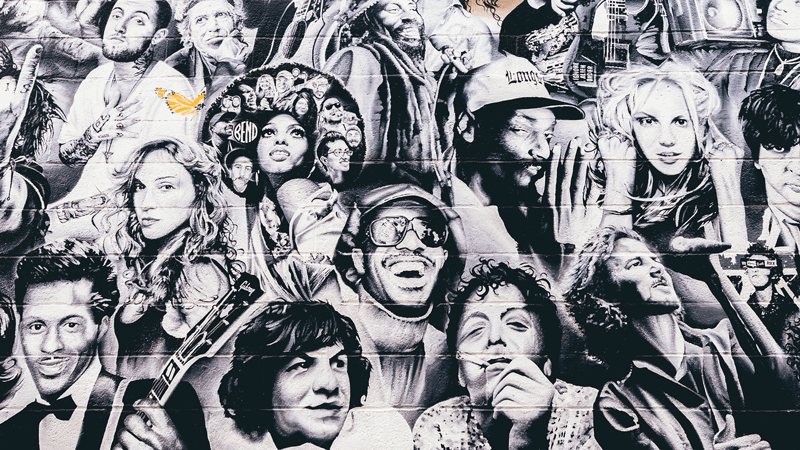 Hoogen attributes the ability to paint with consistency for eight months to the support and opportunity to be comfortable and himself at Silver Moon. “It was the hardest thing I’ve ever done, staying consistent,” said Hoogen. “To just get in the zone and dial one after another perfectly became really powerful for me, especially with outdoor house paint in ninety-degree heat that dries in a second. I felt like the universe painted the whole thing, and I just channeled it.”

There’s still an unpainted section in the alleyway that Hoogen intends to return to. Perhaps the mural will be “Bonus Tracks” featuring additional musicians, or a completely different theme—observers will have to see for themselves in the upcoming years. As for this summer, Hoogen will be painting a mural for a private home project called River Sol, located near First Street Rapids.

See it for yourself at Silver Moon Brewing.

Read more on our local artists by clicking here.