You are here: Home / Culture / History of the Redmond Potato Show

The potato has a long history in Central Oregon, and some local festivals such as the Deschutes County Fair trace their roots to the humble spud. 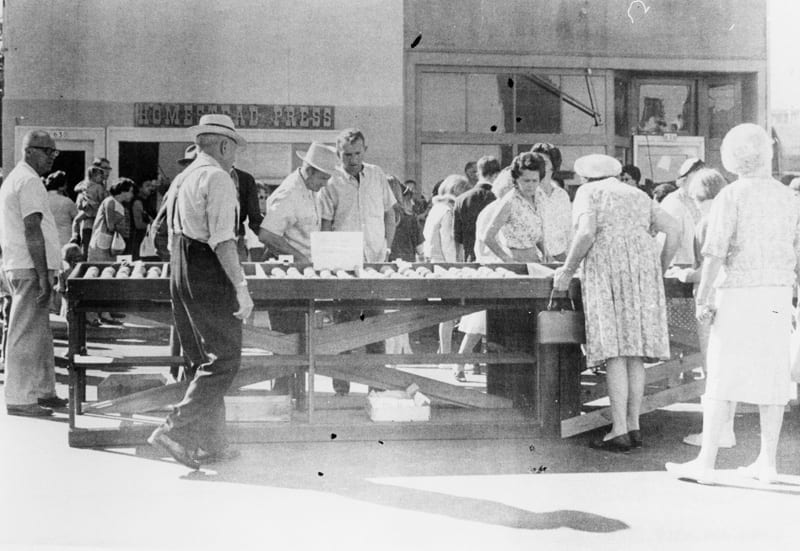 The humble Russet, the Yukon gold, the fingerling, the baby red and—had history been a little kinder—the Deschutes Netted Gem. Once the major export crop of Central Oregon, the Netted Gem occupies a special place in local lore, if not on dinner plates. Think of it as the Oldsmobile of spuds—a brand that once led an industry, but fizzled in a changing economy heavy on mass production, subsidies and cheap imports.

Yes, before Central Oregon emerged as a hub for craft beer production and an outdoor recreation destination, it was known as the potato capital of the West. At the peak of production in the 1950s, Central Oregon had an estimated 5,000 acres, or roughly seven square miles, dedicated to its internationally award-winning variety, the Deschutes Netted Gem.

The Central Oregon potato crop gained fame in 1906 when the first Redmond Potato Show was held. Fred Stanley, a leader in the Central Oregon Irrigation Company, founded the show to promote the varieties of potatoes grown in the region. People traveled on horse and buggy for the event, which showcased twenty-six varieties of potatoes its first year. The show continued annually each fall, and Bend and Redmond grew to be friendly rivals in the potato industry.

For the better part of a century, the show was a highlight of community and civic life, the culmination of a year’s worth of toil in the fields and a celebration of the region’s bounty. Held each fall, the Potato Show helped spur the creation of the Deschutes County Fair in the early 20th century and was incorporated into the larger celebration.

In the late 1950s the festival became a standalone event again in downtown Redmond with an attendant celebration that included firefighters engaging in a downtown water fight, a community barbecue and revelry. The dollop of sour cream on top of the celebration was the coronation of an annual Potato King and Queen that reads like a who’s who of Redmond civic figures.

But success didn’t come easy to Redmond’s pioneering tuber farmers. In 1912, the potato crop began to spiral into “chaos,” according to a 1922 issue of the nationally distributed Potato Magazine. The problem was too much diversity in crops and a lack of consistent supply.

Just two years later, the market rebounded with the introduction of the Deschutes Netted Gem, which “produced an excellent quality of potato under the peculiar climatic conditions of Central Oregon.” Potato Magazine wrote that by 1922, the crop was in an “enviable position” due to the “value of standardization, advertising, and organization when applied to an industry carried on by progressive farmers.” The potatoes grew in popularity and won awards at international potato shows.

Over time, the region became the small fry in Oregon’s potato crop, with production peeling off to the east where processing plants in nearby Eastern Oregon, cheap land and ample water took Oregon’s production to a new scale. With the decline of the potato crop, there was little left to celebrate in Redmond but the memory of a once thriving economy. By 1970 the Potato Show was no more. The festival was revived briefly in 2006 in honor of Redmond’s Centennial celebration.

Today, the legacy of the Netted Gem and Potato Show live on in the Deschutes County Fair, celebrated each August in Redmond with plenty of pageantry—even if the former star of the show, the Netted Gem, hasn’t attended for some time. 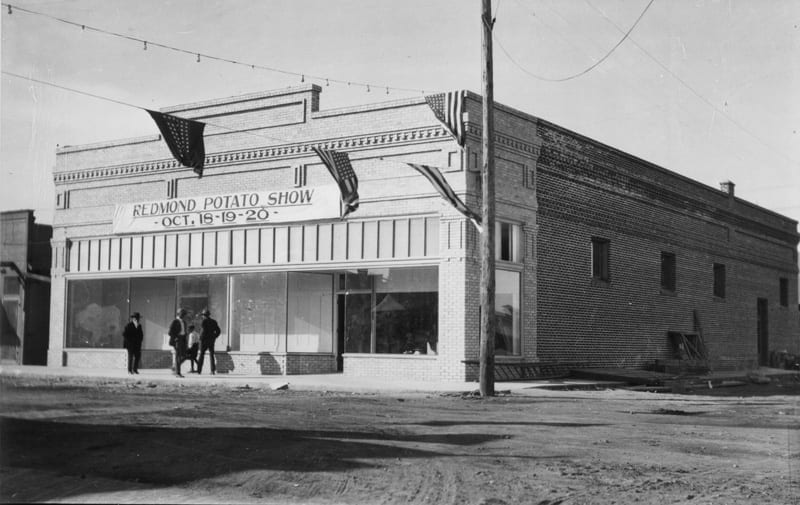 New building at 6th and Deschutes Avenue in Redmond, circa 1918. Photo courtesy of the Deschutes County Historical Society. 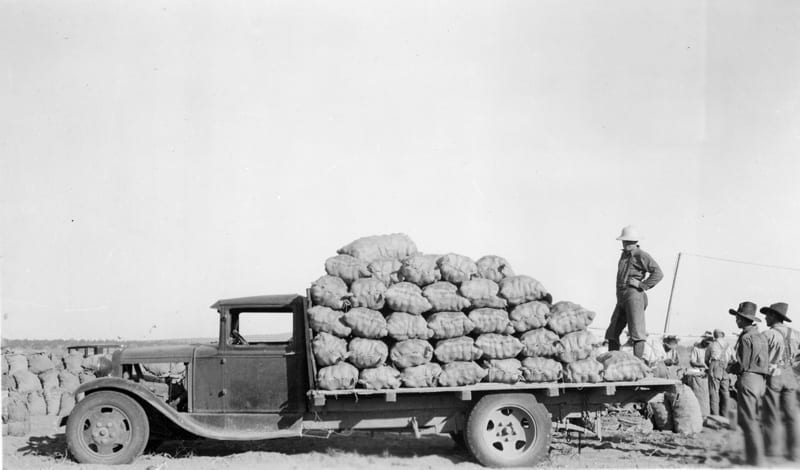 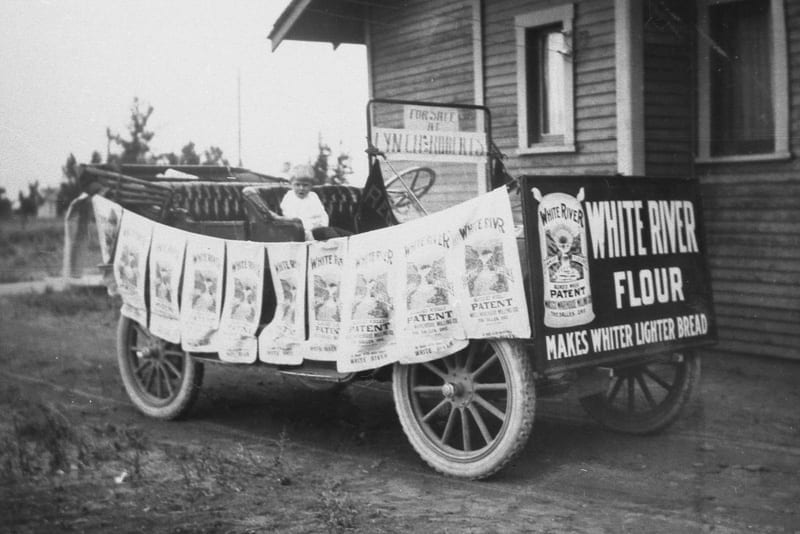 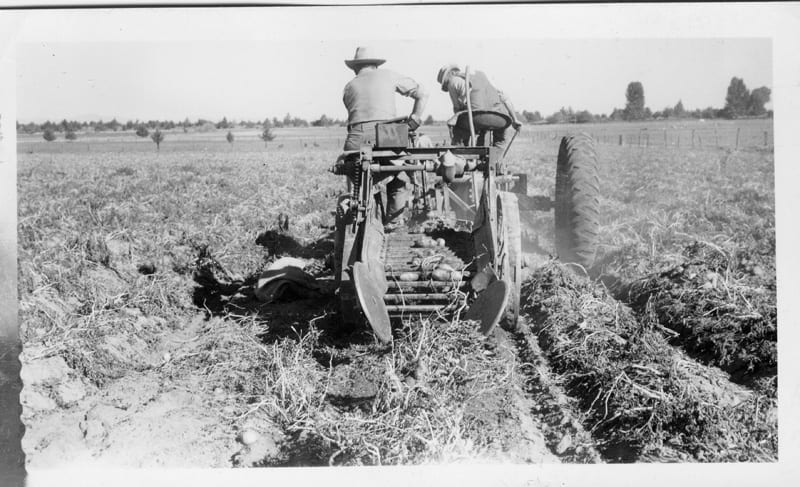 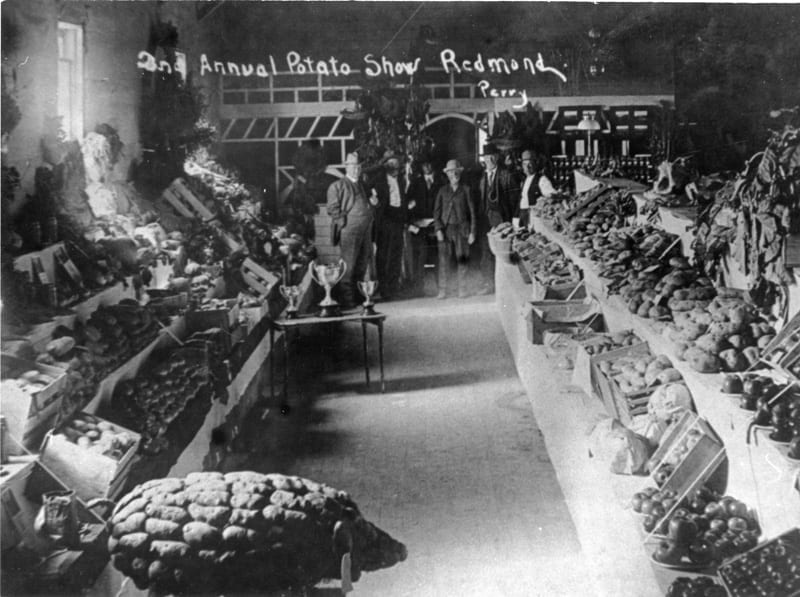 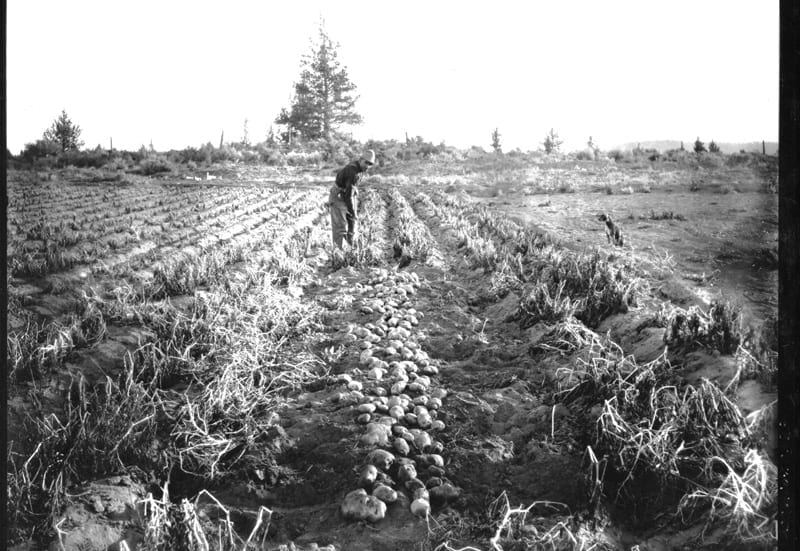 Man with a dog digging in a potato field. Photo courtesy of Deschutes County Historical Society 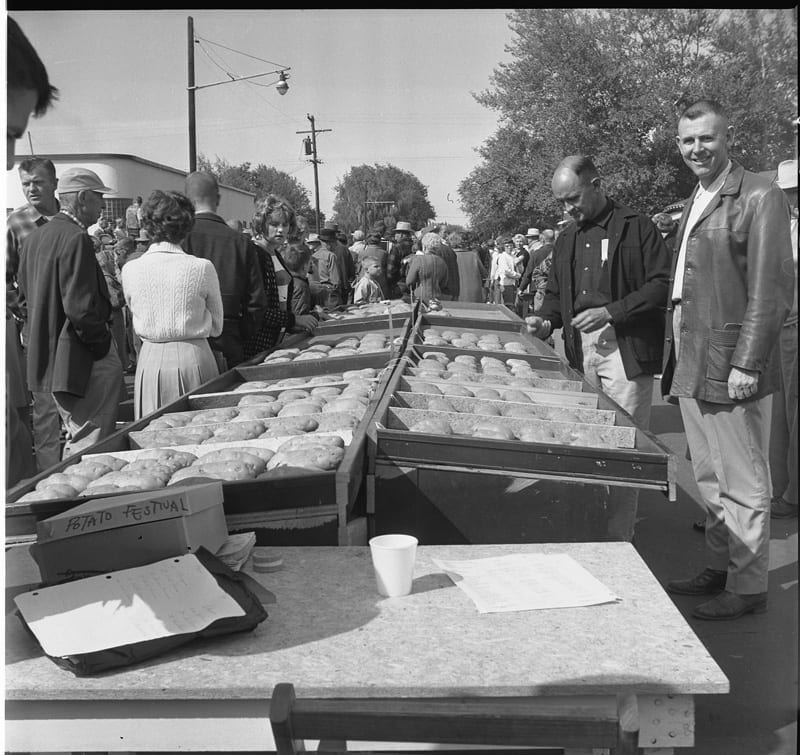