Rick Bartow, a late Native artist who lived most of his life in Newport, Oregon, is featured in a traveling retrospective exhibit of his work that will be at the High Desert Museum beginning January 26. 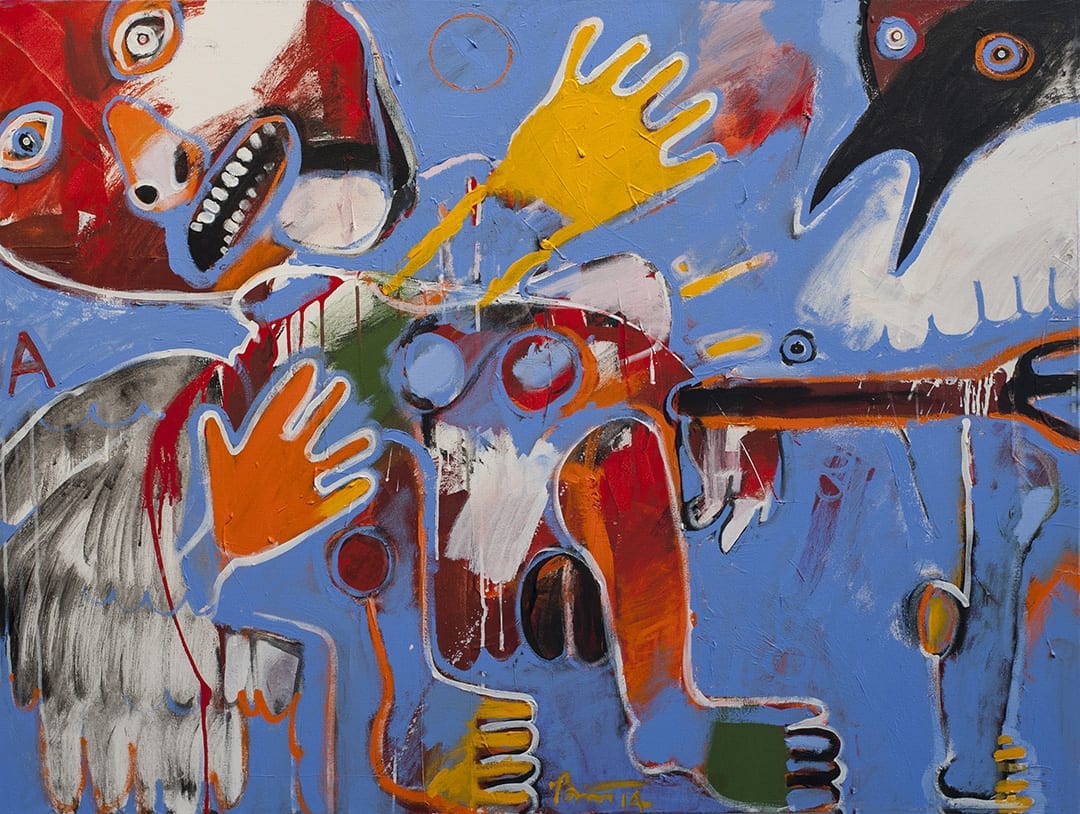 A rare treat awaits visitors to the High Desert Museum when an exhibit by Rick Bartow, an internationally recognized American artist with deep roots in Oregon, opens January 26. Organized by the Jordan Schnitzer Museum of Art, University of Oregon, the retrospective, “Rick Bartow: Things You Know But Cannot Explain,” brings four decades of Bartow’s powerful, gripping, and sometimes humorous drawings, paintings, prints and sculptures to his home state after traveling to nine other American museums.

Bartow was a lifelong resident of Newport where he was born in 1946 and died in 2016. His mother was white, and his father a Wiyot Indian of the Mad River Tribe of northern California. This dual heritage greatly influenced his art.

“Rick worked from an intercultural position, embracing both,” said Charles Froelick, a friend and owner of the Froelick Gallery in Portland. “He was at the forefront of intersectional identity, and yet his work was simply about being human.”

Another lasting influence came from his experience in Vietnam. The Army drafted him in 1969 after he graduated from Western Oregon University. While in Vietnam he worked as a teletype operator and played music for dying and wounded soldiers, earning a Bronze Star for his service. But he came home broken from what he’d seen.

“I had buried a lot of monsters with alcoholism and drug abuse and when they started getting out of the box, I lost the lid and couldn’t put it back,” Bartow told Cultural Survival magazine in 2007. That struggle is reflected in Bartow’s gripping work. In fact, the exhibit takes its name from a graphic-on-paper drawing of a tortured figure, mouth open in horror, with a hand seeming to reach outside its paper prison. He completed this painting in 1979, the same year he sought help from an elder of the Siletz Reservation and got sober.

“There’s a lot of intense emotion in his artwork,” said Froelick. “I was asked many times whether the artist was a sad or angry person. People were afraid to meet him,” he recalled. “I’d have to laugh because Rick was a most delightful person, mild mannered and very gentle.”

Bartow’s work took off after 1985 when William Jamison of Jamison/Thomas Gallery in Portland offered him a solo exhibit. Following Jamison’s death in 1995, he joined the Froelick Gallery and by 1997, he was among twelve Native artists who contributed sculptures for display in the Jacqueline Kennedy Garden at the White House.

In 2012, he carved a pair of twenty-foot poles from a 400-year-old red cedar. He topped one pole with a bear, the other with a raven. The two, titled “We Were Always Here,” stand at the entrance to the Smithsonian’s National Museum of the American Indian and overlooking the National Mall.

He had a lifelong fascination with animals and the stories told in all cultures about them that manifested in his artwork. His paintings and drawings often contain a human head on an animal or animal features on humans in the seamlessness of life. “He was equal parts observant, irreverent, scholarly and goofy, and constantly intrigued by the connectivity between humans, other animal and the spirit realm,” according to his longtime friend and companion, Erin Tormey. “The nexus was endlessly inspiring to him.”

He was a guitarist and singer, and performed around the Northwest. In Newport he was known as a generous man who donated his work to charity events, played music at benefits and at local venues with his band, the Backseat Drivers. The group also appeared at the Sisters Folk Festival.

“He was excited by life and inspired by its complexities—the poetic, the dark and the joyful mysteries,” recalled Froelick. “His work didn’t have a political agenda, and that’s why I believe it’s so powerful and impactful. He simply expressed his art from his own genuine sense of self, and that’s why he’s so respected and why people keep writing about him. His worldview was highly elevated but had plain spoken directness that made it so searing.”