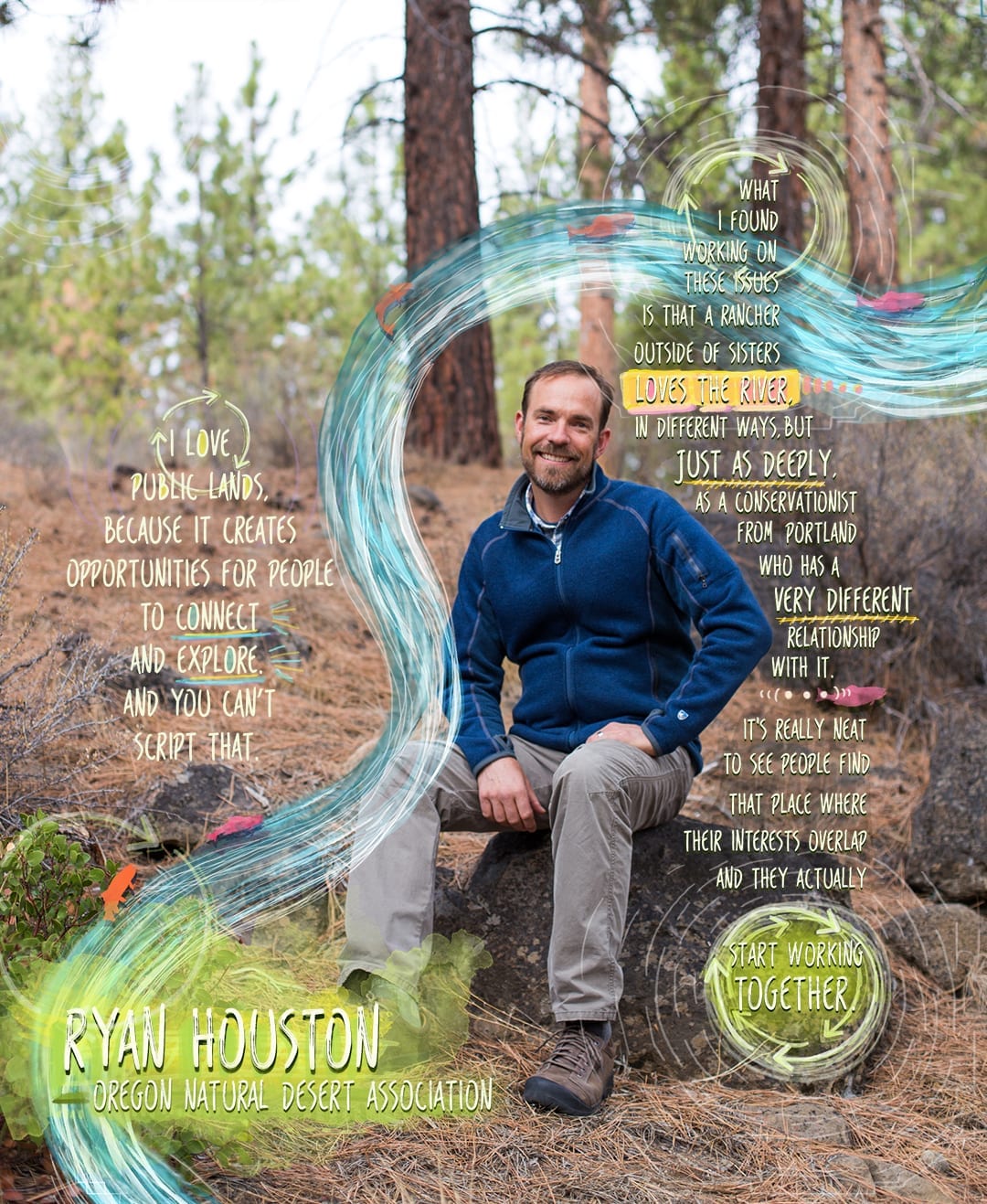 Ryan Houston, the recently named executive director of the Oregon Natural Desert Association (ONDA), spent his free time in the desert of Southern California when he was growing up. “I’m a westerner,” said Houston, 44. “I like the wide open spaces and the big sky of the West.” He spent almost two decades leading the Upper Deschutes Watershed Council, finding common ground between public and private interest to protect and restore the Deschutes River. Houston said he feels fortunate to join ONDA, a nonprofit dedicated to the preservation of Oregon’s desert, in this moment. “It has a tremendously talented professional staff in place, and it has a lot of accomplishments under its belt,” he said. “We know who we are, we know what we want to do, and we stay focused on that.” Here, Houston talks about his desert education, finding common ground for environmental conservation and why public lands matter in Oregon.

On a Desert Education

Unlike most folks who grew up in San Diego who went to the ocean any chance they got, when I had free time, I turned toward the desert. When you head out of San Diego and head over the mountains, it’s a lot like Oregon, where suddenly the wide open desert appears. My earliest exploration was with my older brother. And I had some science teachers in middle school who were interested in introducing people to the natural world. They opened the door. I’ve always been interested in ecology and biology and the desert. When you apply all that to conservation values and a love of environmental protection, it all sort of fits together.

On Science and Conservation

Especially in today’s political environment, it would be easy to interpret that there’s just no common ground between different political interests. What I found working on these issues is that a rancher outside of Sisters loves the river, in different ways, but just as deeply, as a conservationist from Portland who has a very different relationship with it. One may vote Republican and one may vote Democrat, but it’s really neat to see people find that place where their interests overlap and they actually start working together. That’s not always possible, but it’s inspiring because it reminds me that we have a lot more in common than what divides us.

On Finding Hope in Small Wins

Part of the challenge of the environmental or conservation field is that it’s littered with all sorts of depressing stories. The pieces that inspire me are the small wins where you actually see measures of progress. Out in Whychus Creek, salmon and steelhead are coming back for the first time in fifty years because of the reintroduction effort that was started in the 2000s. There was a fifty-year period where salmon and steelhead were completely blocked from coming up the Deschutes River and going into places like Whychus Creek and the community of Sisters. There’s probably a day in 2019, where you and I could go out there and see one. We’re at small numbers—five, three, eight. But they’re actually there. Those are big deals. To think that in this time period, we can actually make those kinds of changes, that’s actually inspiring.

Oregon has a lot of public land. It’s important for Oregonians to remember. Wherever we come from—whether you’re a fifth-generation Oregonian or you’re a recent transplant from another part of the country—this is something really special and it’s something you need to pay attention to. The occupation out on the Malheur reminded people that public lands can’t be taken for granted. In fact, all 350 million in the United States are public land owners. That kind of a shift is really important for the work we do. It’s easy for people to go to look at deserts and see them as things like wastelands. As people get a little closer to look at the desert ecosystem, and understanding that it’s all of ours, you can see people stepping into a stewardship role.

On The Next Generation

The most rewarding thing for me as a parent is being out in the open spaces and watching those guys really explore their world. In early July I took my 10-year-old girl and my 13-year-old boy out in the desert east of Steens Mountain for eight days of just bumming around. We fished in the rivers and we hiked. One day, we drove in this dirt road, to an area with a unique geothermal hot springs. As we got out of the car, the kids were looking around and there was this beautiful veneer of small pebbles across the landscape. Both of them got down on their hands and knees, and I think we spent two hours crawling around and checking out the rocks. Just that freedom is the kind of experience that I like to create for them. That’s why I love public lands, because it creates opportunities for people to connect and explore. And you can’t script that.