You are here: Home / Culture / Santiam Pass Ski Lodge Gets a New Life Thanks to Oregon Couple

The Santiam Pass Ski Lodge, a historic but neglected ski lodge off the highway, gets a new lease on life thanks to the dedication of one Oregon couple. 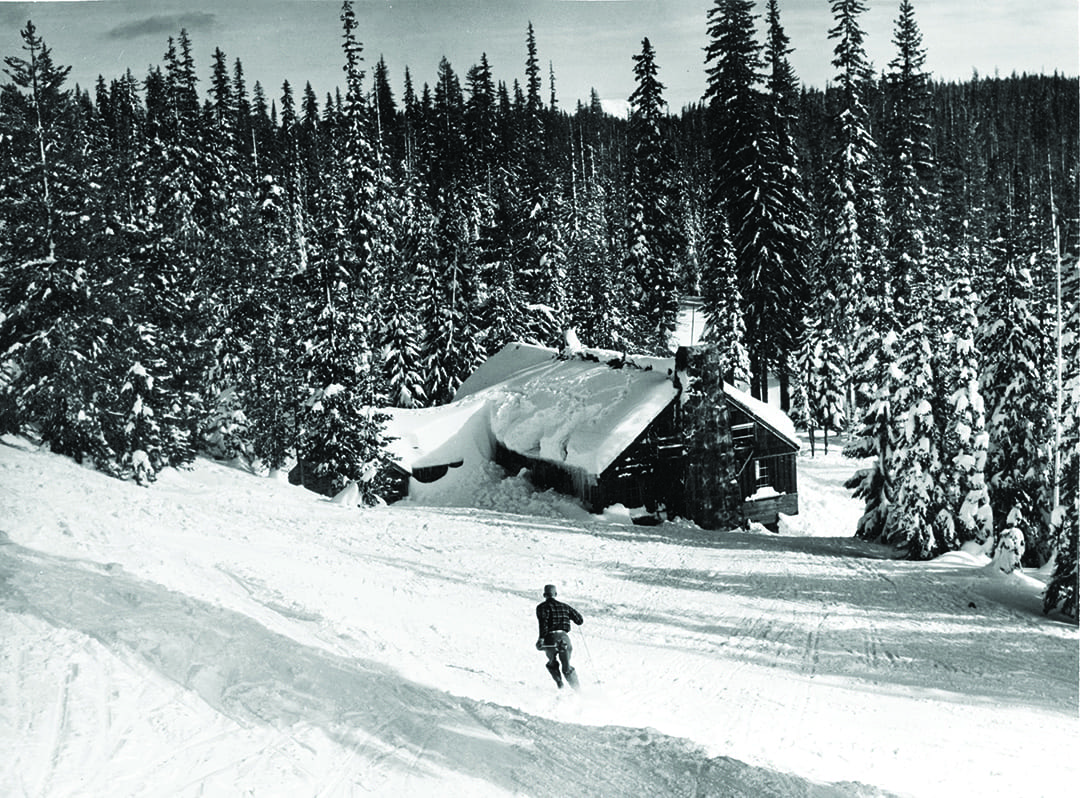 Dwight Sheets’ first memory of the Santiam Pass Ski Lodge is of being a child, standing inside the lodge and looking around at the seventy-five windows, feeling like he was outside. It’s a memory that has stuck with him for decades even as the iconic lodge slipped into disrepair.

After seeing the building sit vacant for three decades, Dwight and his wife, Susan, made the restoration of the lodge a personal mission. Today, the massive task of revitalizing the long-neglected lodge is looking less like a pipedream. In November of 2018, the lodge was added to the National Register of Historic Places. It’s a designation that has taken decades of work, and, along with recognizing the significance of the lodge, will help with the costs of the renovation in tax credits.

The lodge was built as a Civilian Conservation Corps project in 1940, just a year after Hoodoo Ski Area began operating. It had a rope tow, overnight lodging and was popular with skiers, but Hoodoo took off because it was more easily accessible from the road.

By the 1950s, it had been turned over to the Presbyterian church and used as a retreat center for the next three decades. In 1986, the church opted not to renew its permit, and the lodge was boarded up. No one came forward to claim the lodge, so it sat empty. But it wasn’t forgotten.

In 1989, Catherine Lindberg, an archeologist for the Willamette National Forest, began the work of getting the lodge on the National Register of Historic Places, cementing its place in Oregon history. It was also key to securing its future thanks to the protection and benefits afforded such places. She wrote an evaluation of the lodge, detailing much of its history and recounting stories from the skiers and travelers who had experienced it in the 1940s and 1950s.

In 2000, some internal support structure was added to keep the aging lodge from collapsing, but still no one showed interest in taking on the lodge. In 2003, the lodge was almost lost. The B&B Complex Fires burned more than 90,000 acres of the Cascade Range and threatened the lodge, but a team of community members and wildland firefighters wrapped the Santiam Pass Ski Lodge in Kevlar, cut a fireline around the perimeter and were able to save it even as the forest around it burned. 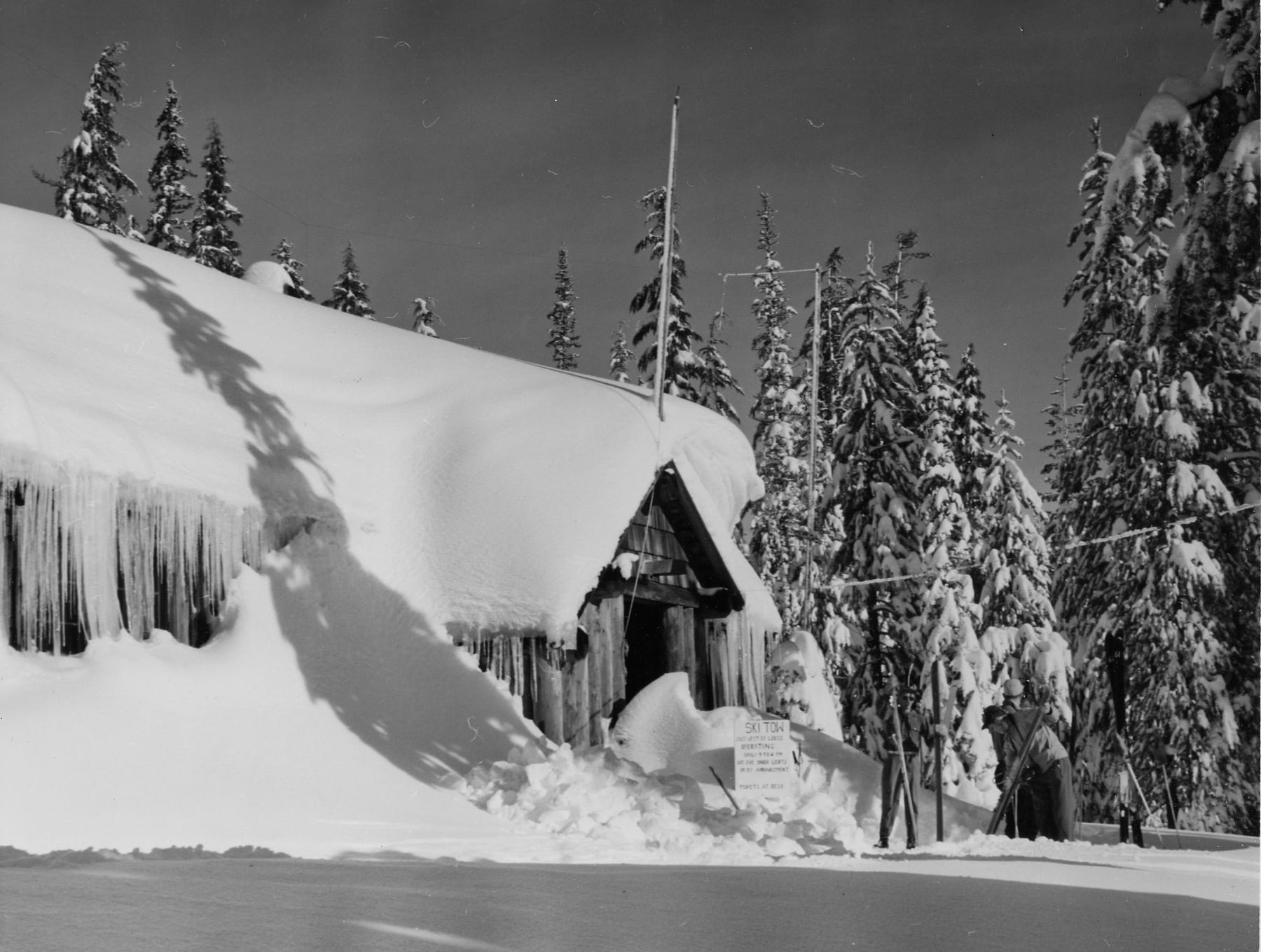 While clearly many cared about the lodge, no one was ready to take up its revitalization as a cause. That is until Dwight and Susan Sheets toured the lodge with a ranger in 2016. Dwight, a former college professor, and Susan, a former music teacher, decided they wanted to take on the restoration project and revive the lodge for the public. They’ll be operating the lodge under a special use permit that was given to them in January of 2018. They formed a nonprofit, Friends of Santiam Pass Ski Lodge, to raise funds for the project, which they estimate will cost up to $3 million.

Darren Cross is the McKenzie National Forest district ranger and is aiding the Sheets during the restoration project. “I give them a lot of credit for taking this on in the public interest,” said Cross. “It’s a unique and important site for [the Forest Service].”

Cross said the Santiam Pass Ski Lodge is at a location that will draw people year-round who are visiting Hoodoo Ski Area, Ray Benson Sno-Park, Big Lake and the Santiam Off Highway Vehicle Area.

With the permit in hand and some funding secured, Dwight and Susan can start the renovation, beginning with restoring the iconic windows that captured Dwight’s imagination as a young man. They will also remove some of the outer additions that were added after it was built, restoring the original architecture of the lodge.

Dwight and Susan envision the lodge as a rest stop along Santiam Pass as well as a destination for cultural events. They plan to add new ADA restrooms (“Something that’s really needed as you travel along the pass,” said Susan) along with a cafe with snacks, desserts, drinks and maybe a gift shop. In the winter, the area is used by snowshoers and cross-country skiers, and the Sheetses expect that the lodge will still be used as a warming hut. The main level upstairs will be an event space, and they are hoping to draw music and arts events.

“The thing that stood out for both of us, is we wanted it to be enjoyed by as many people as possible,” said Dwight.