You don’t get much more local than Sally Russell. 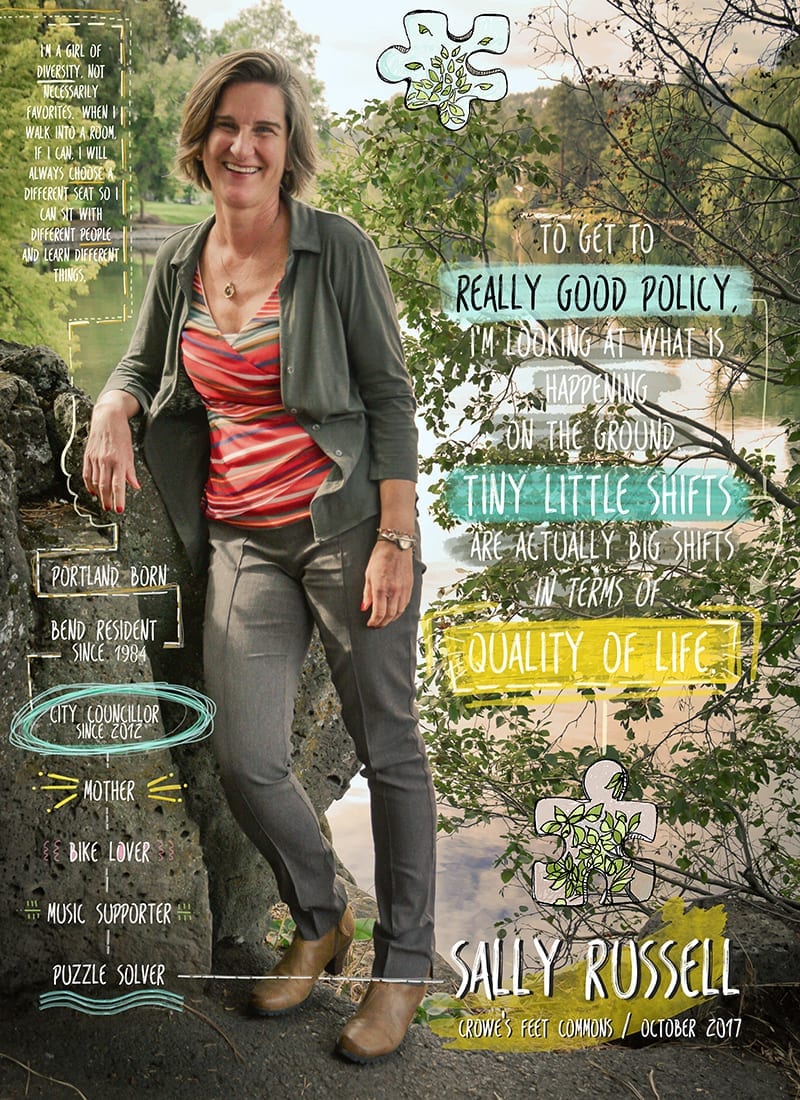 A fifth-generation Oregonian who has been in Bend for more than thirty years, Sally Russell has raised two daughters while contributing to a host of civic and cultural institutions, including serving as the executive director of Cascade Cycling Classic and the Cascade Festival of Music. She has served on the Bend City Council since 2012. Russell recently spoke with Bend Magazine‘s Theresa “Teafly” Peterson about Bend’s evolution.

I grew up in Portland. My family is from Portland. We have deep roots in Oregon. My father’s family came across on the Oregon Trail. I have a set of maps my mom and dad found, as a matter of fact. My family built a cabin up at Elk Lake in 1932. My sister and I would bum as much time as we could from our relatives who were staying there. Then, I followed a boyfriend here in 1984. He left. I stayed.

On What It Means to Be Local

The thing I loved best when I moved to Bend—we still have some of it—is that we always waved to each other. We always knew everybody’s name. There was always this sense of place and belonging. Really, Bend still is a place where there is a sense of belonging, of being accepted and being drawn in, I hope, for everyone in our community. That was very much what drew me to Bend in the beginning. We knew each other and if we didn’t, if we were passing each other at an intersection, we still waved. There was this sense that “We’re in this together.”

With the new influx of people, there are so many opportunities! One is the opportunity to meet people you have more in common with. The music offerings, culture and art offerings are now so much broader. If you look at food, art, culture and music, all of that is really rich. When I first moved to Bend, we only had country western music—and that’s okay! I can listen to country western music, and my daughters love it, but there comes a moment where you want a little change. Now we have that.

I’m a girl of diversity, not necessarily favorites. When I walk into a room, I will always choose a different seat if I can, so I can sit with different people and learn different things.

I always played with the idea of participating in a way where I could contribute to the policy-making of the city where I live and raised children. I served on the planning commission for a while, so I had a really good understanding of what it could be like. Believe me, when you are standing underneath that cold political waterfall, you are never quite ready for it—no matter how much you prepare.

To get to really good policy, I’m looking at what is happening on the ground. Tiny little shifts are actually big shifts in terms of quality of life.

Bend goes through all these boom and bust cycles and you have to reinvent yourself and be very flexible. The hardest bust was for sure the one that began to manifest in 2006-2007 and then really locked-in by 2008. That was tough. We lost businesses, we lost people. It was tough, tough. Bend in some ways has recovered. One of my goals in terms of my leadership role in this community is to try to really look at these boom and bust cycles over time and to look at strategies to stabilize our community to be more resilient.

Many people don’t know, but I was a formidable mountain bike racer. I won a bike marathon in Germany, like eight hours on the bike. I have an endurance factor. I played piano for ten years, so I have a huge appreciation for music as a way to communicate. I’ve taken all these passions—my passion for the outdoors, my athleticism, my appreciation for the written word and my appreciation for people who have different values and points of view—and put them together to solve the puzzle, and I love these kind of puzzles.