You are here: Home / Home / This Home Could Be A Modern Art Museum 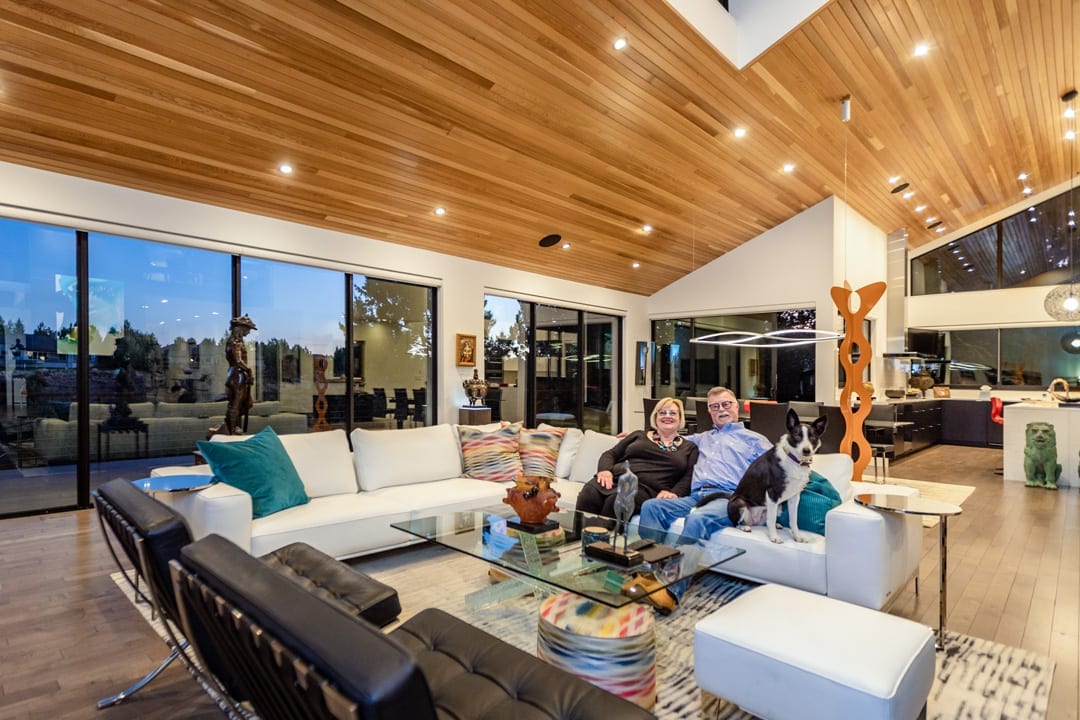 When Thom and Cyndie Bell moved from Orange County in 2004 and bought a property west of Redmond, they chose the house for the view. Set high on a canyon cliff overlooking a stretch of the Deschutes River just upriver from Cline Falls State Scenic Viewpoint, with the peaks of Mount Jefferson and Mount Bachelor in the distance, the home offered a birds-eye view of rimrock, the river, wildlife and plenty of sky. The eight-acre parcel was just enough for their two horses, a border collie named Ranger and themselves.

But the house itself, built in the 1980s, needed updating. The Bells, who are retired from the advertising business in Los Angeles, are avid art collectors with vivid and specific design ideals. By the time they were ready to renovate their home, they’d spent years contemplating exactly what they had in mind to recreate Ranger’s Ridge.

The four-year project, completed in 2013, took the house down to the studs, added 1,500 square feet, incorporated dozens of floor-toceiling windows, and completely transformed the house. The result is a stunning 4,200-square-foot modern home filled with works of art and offering views at every turn. 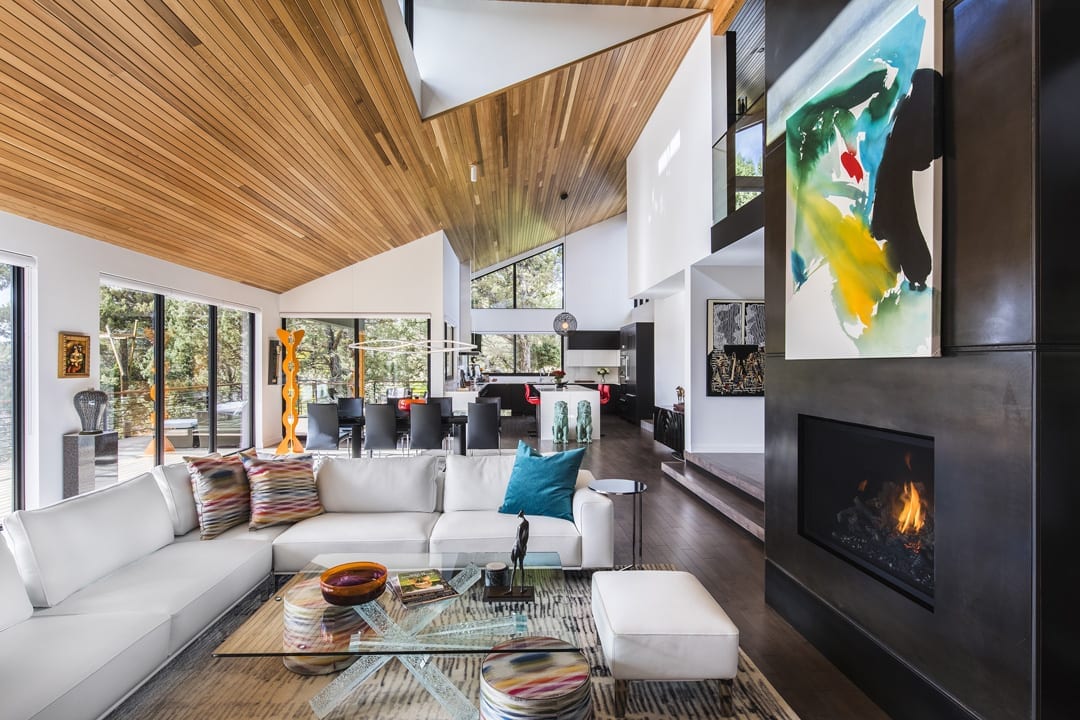 The dominant design concept for the redesign was “open.” The couple doubled the number of windows in the house, turning walls into windows in many places. “The floor to ceiling windows opened things up considerably,” said Thom. “Every view was enhanced.”

To get a sense of the home’s aesthetic, step into the master bathroom. While primarily a utilitarian space, it’s a gorgeous one. The room incorporates an uninterrupted row of horizontal windows at eye level, through which are old-growth juniper trees covered in green lichen, and beyond, chocolatecolored river canyon walls sliced through by the blue cut of the river. Cyndie loves the room for “the views and the light,” she said. A glass shower, deep tub, and tile and wood accents balance out the room.

The bath illustrates the grandeur of the home, throughout which great measures were taken to maintain precise design elements and an open feeling. For instance, the supporting wall near the front entry, which extends to the second floor alongside the stairway, was constructed as a screen wall instead of a solid wall, meaning stacked, vertical-grain fir beams separated with steel supports. Guests’ eyes can see easily, if not completely, through the slots between the beams, maintaining light and openness.

The wall, as well as a striking handpatinaed metal fireplace, were the two most challenging features of the home to complete, said Dan Stockel of R&H Construction, contractor on the home project. He said that working closely with the Bells to adhere to their high-concept design ideals was challenging but rewarding. “In Thom’s view, perfect does exist,” he explained. “It was great to see our crews pushed to achieve that.” 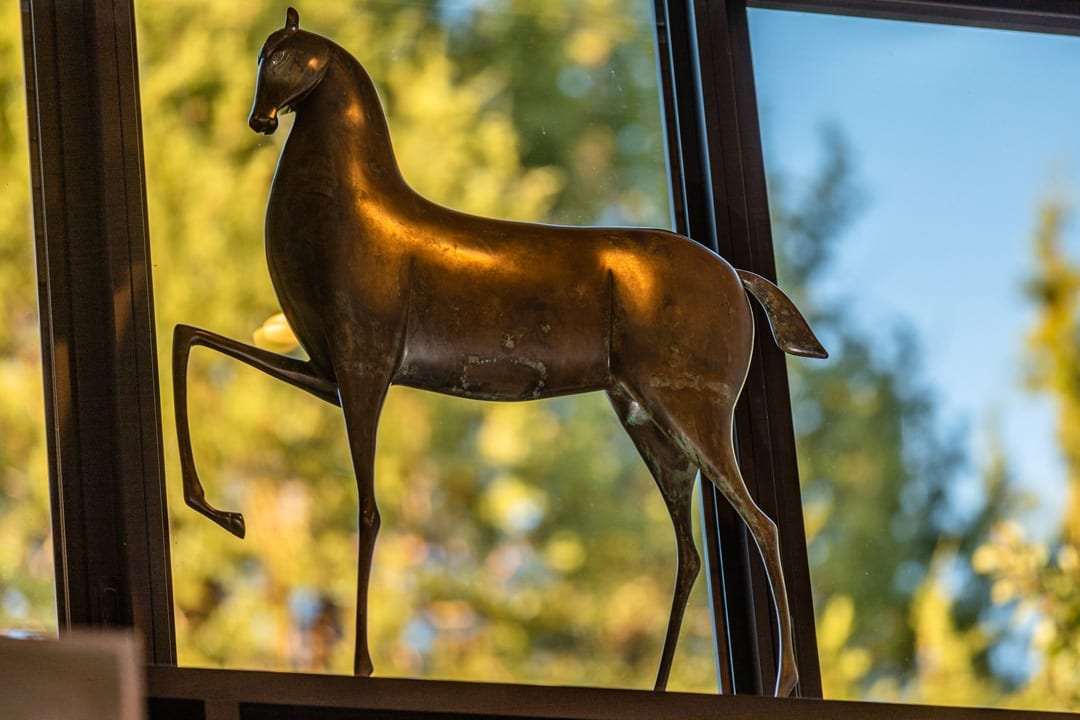 This Egyptian horse sculpture in bronze is centuries old and tops a high bookshelf. Photo by Brandon Nixon.

Every wall and every room in the house is adorned with art. Paintings galore and sculptures in metals, ceramic and glass are everywhere. “Our vision was that our home be like a museum gallery,” said Thom. “We collect museum-quality pieces with classic, iconic design. We look for timelessness and lasting design principles.”

A reproduction of Donatello’s David perches near the living room windows. Carved stone busts sit on tables. A polished horn of a Texas longhorn adorns the kitchen counter. A stylized Egyptian horse several centuries old sits high on a bookshelf in the upstairs lounge. A spectacular contemporary mixed-media painting is hung from the back of the fireplace. Five lengths of fused glass in varying colors cling to the laundry room wall.

“Our aesthetic is contemporary mixed with antiquity,” explained Thom. “Modern balanced with classic.” The furniture and fixtures are as much of a work of art as the artworks themselves. A white leather couch is partnered with black leather Barcelona chairs in the living room. Nearby, the dining room table has a clever set of gears within that retract the table’s leaves, depending on number of guests for that meal. “We want every room to have a balance of color, form and texture,” said Thom.

One piece of art is particularly personal. It’s a torch from the 1984 Olympics framed in plexiglass and secured to a dining room wall. “The torch had been carried across the U.S., runner to runner,” recalled Cyndie. “I was the last runner in Orange County, and carried it to the stadium.” 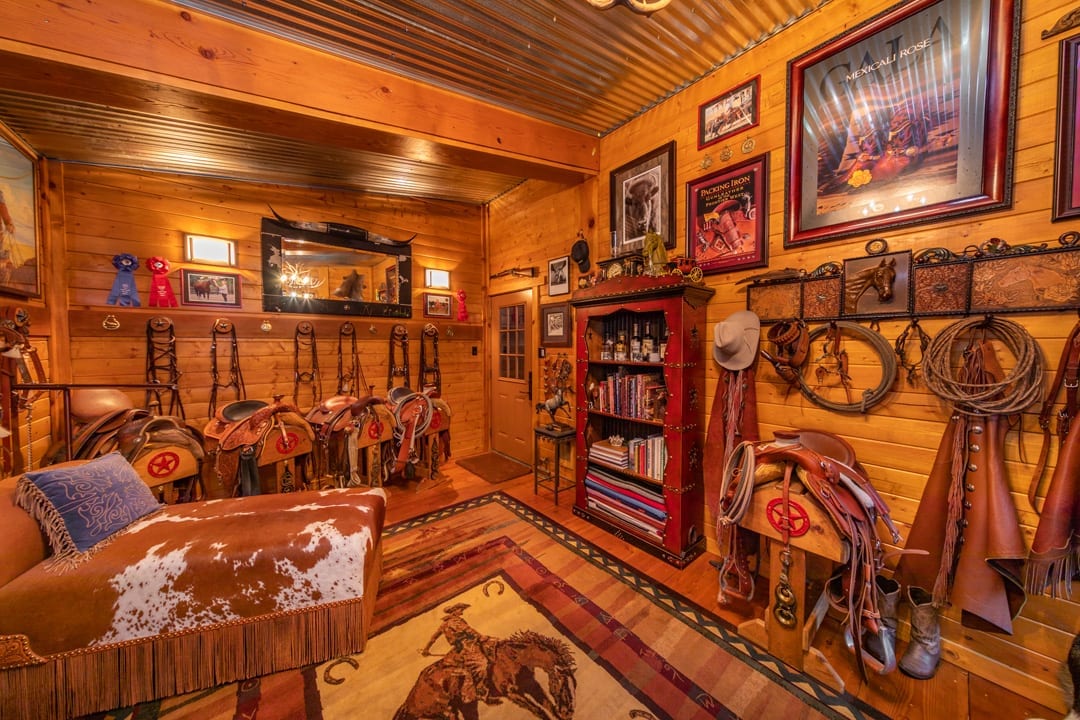 If the house is a museum of antiquity and contemporary art, the tack room is a spatial immersion in Western culture. Thom is an avid horseman who enjoys cutting competitions and formerly participated on a mounted search and rescue team for San Bernardino County. Equally laden in artworks as the house, the tack room exudes classy, cowboy charm. “This space is totally different than the house,” he said.

A shelf of whisky glistens in an antique cabinet; leather tooling backs a coat rack; signed rodeo posters line the walls. A cowhide chaise lounge accents the center of the room. Saddles hang from the wall, indicating that for all of its beauty, the tack room is a working space, too.

But About That View 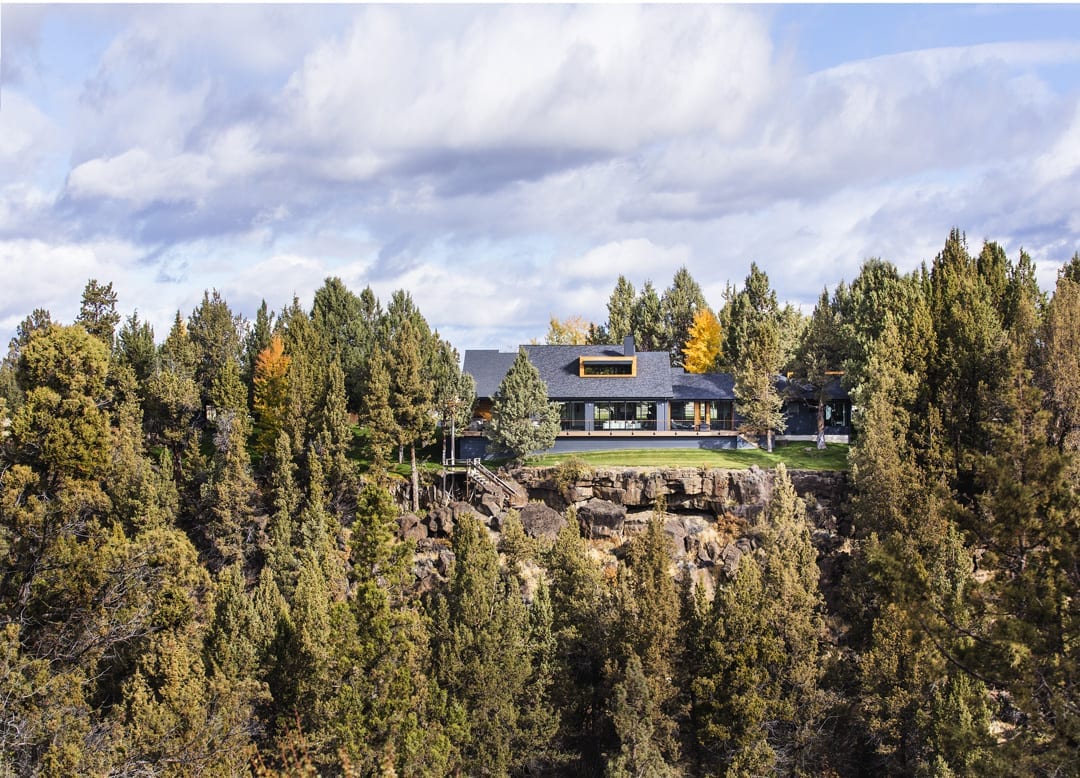 The former deck, Cyndie said, was multilevel with many different, disjointed heights. “We leveled it all out,” she explained. The wide expanse of composite decking is the perfect platform to take in what drew the Bells to the site in the first place. “We see eagles, osprey, hawks,” Cyndie said, gazing down upon the river. “At night the moon reflects in the river. The trees change. You can really see all four seasons portrayed here.”

Thom stood near, taking in the expansive view. “We feel very blessed,” he said.