You are here: Home / Adventure / Cowboys and Golfers Meet at Silvies Valley Ranch 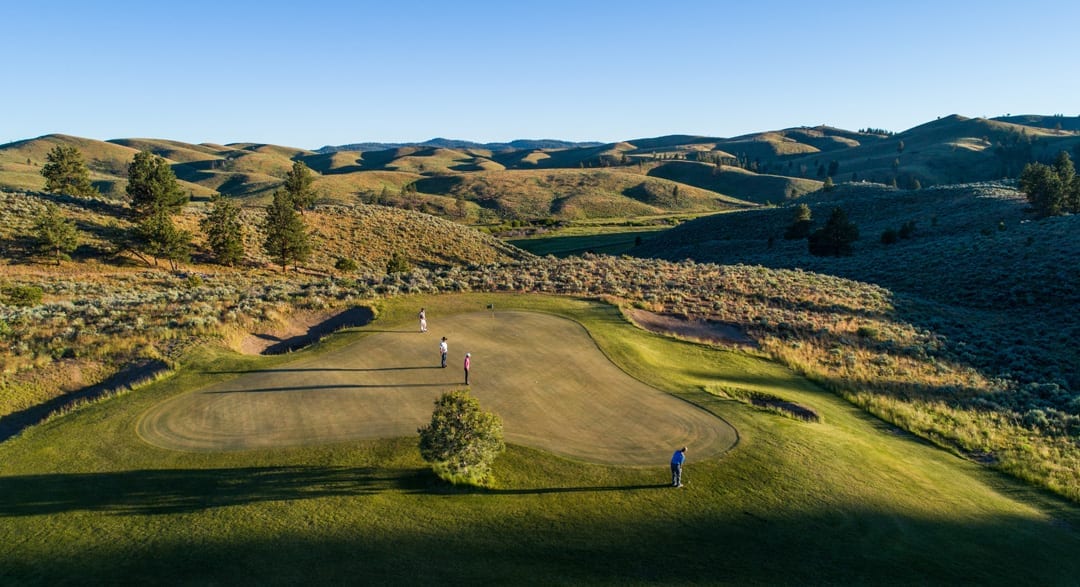 Scott Campbell isn’t the kind of person who does anything halfway. Campbell is the veterinarian who did for animal care what Ray Kroc did for the hamburger, turning a sleepy Portland veterinary practice into a multimillion-dollar pet hospital empire. So when Campbell, now semi-retired, returned his attention to his native Eastern Oregon, folks who knew Campbell expected that he would come up with something big. He didn’t disappoint.

In late 2017, Campbell unveiled his latest venture—part luxury resort, part dude ranch and totally Oregon. Silvies Valley Ranch Retreat and Links is a 140,000-acre resort and golf destination located between Burns and John Day that ties the region’s colorful ranching history with what Campbell sees as its economic future.

Campbell grew up in nearby Burns, about forty-five minutes south of Silvies Valley, not far, at least by Eastern Oregon standards. It was in Burns that he developed his early interest in animal care, tending to horses and cattle on his family’s ranching operation. Campbell’s career took off in the late in 1980s when he grew his traditional veterinary practice into Banfield Pet Hospitals, a business franchise that pioneered concepts like health insurance for pets.

It’s no accident that Silvies Ranch sits far from the nearest city or international airport. Campbell wanted a project that showcased the diverse geography and natural beauty of Eastern Oregon, while also addressing the persistent lack of economic investment and job opportunity in places like Burns, where unemployment remains high and wages stubbornly low. Campbell looked to Bandon, another formerly depressed town on Oregon’s coast, and saw the economic transformation that followed the development of Bandon Dunes Golf Resort. 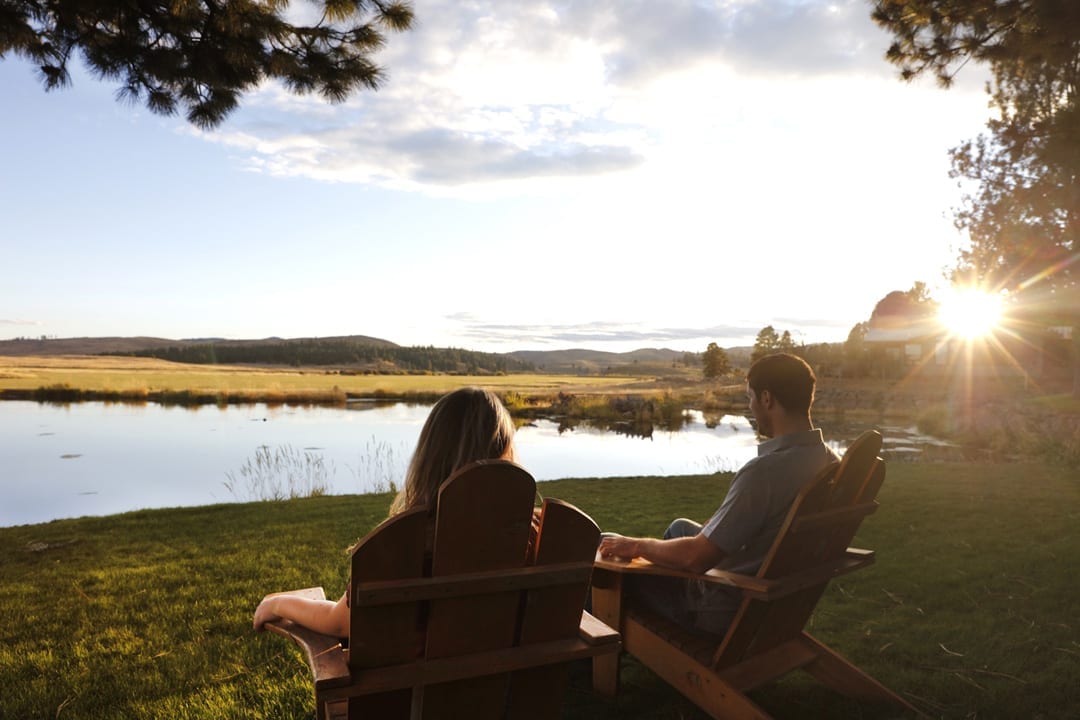 Some seven years in the making, after a brief sneak preview last summer, the resort is now ready to debut for its first full year of operation. If you’re expecting Sunriver or Black Butte Ranch, think again. Unlike those sprawling resorts, there are no roads at Silvies. Guests check in at the welcome center and transfer their belongings into golf carts, the preferred mode of transportation around the property, where gravel paths connect the communal dining hall, cabins and golf courses.

While Silvies Ranch is plenty remote (the only traffic jam we witnessed involved a massive herd of resident elk), it’s also surprisingly accessible from Central Oregon. If you’re traveling from Bend, it’s hard to get lost. Head straight to Burns and hang a left. From there the two-lane Highway 395 climbs into the heart of the Malheur National Forest through a bulwark of massive lava rock and sandstone formations that at times pinch the road into narrow slot canyons, before climbing into a ponderosa forest that beckons exploration. Within half an hour or so, the highway drops into a broad valley where signs announce entry into the historic Silvies Valley Ranch, really a patchwork of pre-existing ranches and homestead properties that stretch into the surrounding hills to the east and west. Roadside signs direct guests along gravel roads into the ranch where they are greeted by a proverbial welcome wagon and concierge. The check-in process is eased by a causal refreshment station with a nice craft beer selection, wine by the glass and artisan cheese. (Cocktail hours are an enshrined part of daily life at Silvies.)

While 2018 brings the debut of a spa and fitness center, you won’t find a wave pool or waterslide. Instead, Campbell is betting that his unique approach to the destination golf resort will appeal to golfers who are willing to travel, sometimes across the globe, for one-of-a-kind experiences like Silvies. Designer Dan Hixson designed a “reversible golf course” that can be played as two different 18-hole layouts depending on the day. This year debuts an even wilder idea, a 7-hole, par-3 golf course dubbed McVeigh’s Gauntlet. The course, more an array of tee boxes and greens, requires players to make approach shots over narrow valleys to angular greens tucked onto hillsides. If it seems like cruel joke on average handicappers, consider this punchline: Silvies is employing trained goats to serve as caddies (the upside being that no tipping is required). There is also a short pitch-and-putt, par-3 course that offers players a taste of Silvies’ signature sloped greens and the links golf tactics they require. While the golf can be challenging, the views are beyond comparison with many holes featuring elevated tee boxes that offer broad vistas over seemingly endless rolling valleys that stretch to the foot of the Blue Mountains. 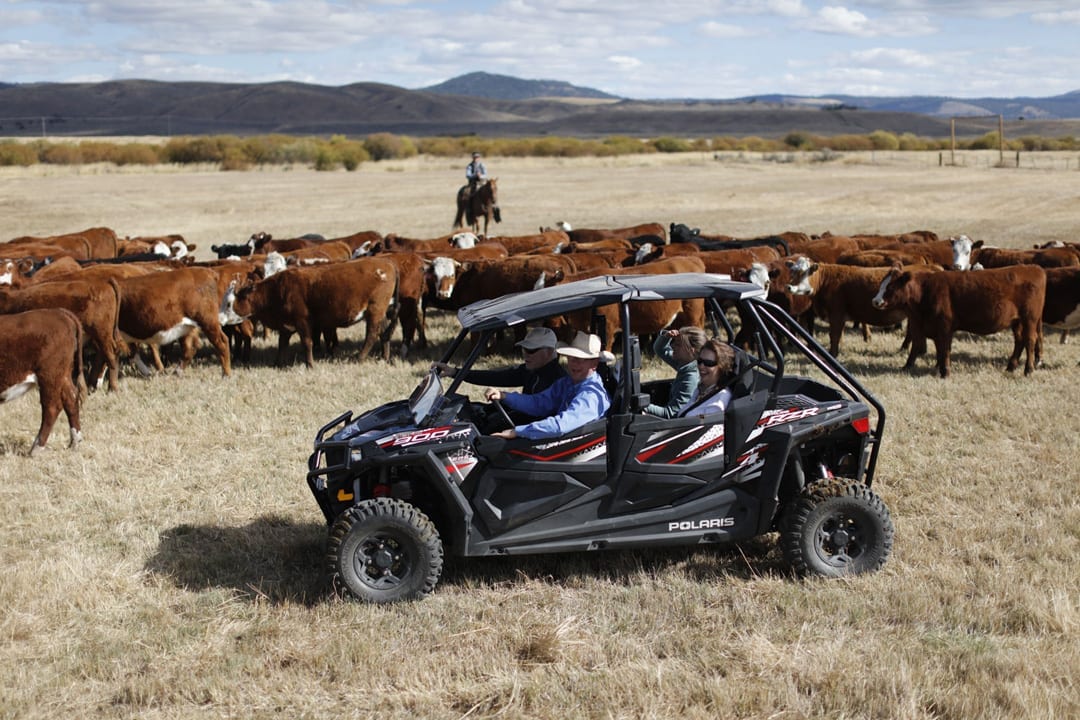 Schedules typically revolve around tee times at Silvies, which leaves non-golfers plenty of time for exploration and relaxation, both of which are in abundance at the resort. In addition to golf, Silvies offers hiking, horseback riding and fishing in a man-made pond. Come July, the resort will also reveal its new spa, which includes a fitness room, lap pool, saunas, a climbing wall and spa treatments to soothe golf-weary shoulders and backs. In addition to golf and spa activities, the ranch offers off-road biking and a shooting range where guests can play Wyatt Earp under the watchful eye of an instructor who will offer the finer points of gun safety and marksmanship. Regular cattle drives mean guests can also witness and partake in the time-honored round-up tradition.

If you’d rather just relax and take in the scenery, Silvies has you covered there, too. The cabins feature a deck-side hot tub for guests staying in the main guest room. (A lockout feature allows the cabins to be set up in multiple configurations for booking flexibility.) The cabins themselves carry the resort’s Western themes and feature rustic luxury—think antler chandeliers and leather couches—with plenty of modern touches like climate-controlled wine storage and radiant heat.

If the days offer solitude, meals are an event that draw guests from around the ranch. During our stay, a single group seating offered a chance to mingle with others, making new friends while enjoying the ranch’s hospitality. Guests were offered steak or chicken dinner, but the choice was clear for me as well as most of my dining companions. We were asked to select a carving knife from a deliberately mismatched selection of hunting knives that was passed around the table like a church offering plate. Once properly armed, we dug into perfectly cooked ribeye steaks with sides like mashed potatoes and roasted broccolini shared around family style. Afterward, we migrated to the patio for a bonfire and a last round of cocktails, watching as crackling embers drifted over our heads toward the first evening stars peeking through a fading desert sky.

In time, Campbell hopes that Silvies Ranch will draw guests from as far away as Japan and China, not just for the golf, but for a chance to immerse themselves in the Old West, or at least the idea of it. Campbell acknowledges that it will likely take several years for international travel buzz to develop around Silvies, which has only now just begun to break ground on many of its planned overnight accommodations. Given the singular and signature Western experience, he believes that they will come. In the meantime, he’s got Oregon’s hardcore golfers looking east and seeing green.